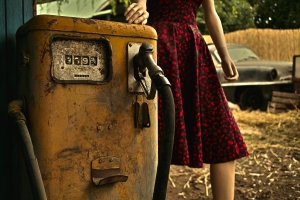 Phoenix, AZ. Pack up and go. No need to overthink it. Map, camera, hat, fleece pullover. A little food but not too much—these pretzels and dried cranberries will do –and a canteen full of water. Will buy some more when I stop to get gas. Beer, of course. Cigars. Couple of books.

The Jeep has everything else, should it be needed. Always does. (Must be able to escape from clients, creditors, and civilizational collapse at a moment’s notice.) Tent, bedroll, camp table, camp chair, emergency water. Gear bag with stove, utensils, sundry odds and ends, good sharp knife.

Should really have a gun, but don’t. On principle. My wife’s principle. The principle that if I owned a gun, I would manage to shoot myself within a matter of days, if not hours. Hard to argue with that. My mom felt the same way.

Where am I going? Not sure. North. Let’s start with Yarnell.  A little town that has appealed to my imagination since I first saw it two years ago. We’ll head there first.

Today will be a day of remembrance, whether I want it to be or not, so it’s best to get out. Let the memories come, as I know they will, and be done with it. I suppose I could enact this ritual on the day my mother died, instead of her birthday. But she happened to die on my birthday, and people tend to want me around on that day. (I guess they have their reasons.) Today I can have solitude. And a landscape to match my mood.

Stop in Wickenburg for gas and some bottled water. The bucket at the cash register asks me to help save the library, and I am happy to oblige with my twenty-seven cents in change. My munificence is apt—the public library was my mother’s cause, after all. One of the few that didn’t involve church or music. When I was four we lived in a rented house in town, and she would pull me to the library in my little red wagon to load up on books. We’d go through a pile a day, she would later tell me. I don’t remember it.

Yarnell—“where the desert breeze meets the mountain air”—is funky, if you’re patient with it. At first glance, it looks like most other American small towns.  Poor. Going out of business. They say that many artists live here, but the place is devoid of pretentiousness. The relatively few houses that aren’t prefab look like they were designed by a drunken architect. One eventually realizes that this is because the entire town is situated within a vast field of massive boulders. Nearly every house has at least one pile of giant, six-hundred-square-foot rocks in the yard. Some improbably shaped structures are wedged in between piles. No problems achieving a spirit of place here. I like it.

There is also a shrine to St. Joseph. “World famous,” it says. I believe it but glide on by. Popular piety comes hard to us converts. Mom wasn’t too pleased when she heard I’d converted—a couple dozen generations of anti-Catholicism can be a bit hard to overcome—but she rallied. Our wedding was the first mass she’d ever attended. That was also the day when I first thought something might be wrong. A deer-in-the-headlights look I could understand. This was more like doe-in-the-floodlights. She was not her usual jolly self.

Let’s move on. We’ll go up to Kirkland, and then over to Bagdad. From there, we’ll see. Just drive.

This is ranching country, high desert, and at 4,000 feet, although it is late April, spring is only now arriving. Most of the mesquites are not yet budded out. The whole country is colorless, compared to the gleaming, shimmering desert below. The sunlight seems more muted, too, although the sky is utterly cloudless.

Through Peeples Valley, then Kirkland Valley, over to Hillside. On toward Bagdad, we descend. The Sonoran Desert reappears.

It’s brighter now, but no amount of sun can make an active mining town look good. Bagdad: “the nicest copper town anywhere.” An appropriately low bar. In between entrances to this or that part of the mining operation are what seem to be an inordinate number of ballfields. Home of the Sultans. The memory now is of an inordinately enthusiastic Little League mother. Jesus, mom, pipe down. Don’t you think I stand out enough as the kid who’s half a head shorter than every other kid his age? Woman never could control her emotions. Famously acted like a five-year-old whenever she opened a gift of any kind.

She liked to hassle us kids anyway. Needle us a bit. Shock our puritanical souls. Ask us if we’d like to go to Ruddfucker’s, and then, at our shrieks of horror, pretend to have misspoken. Mild stuff, but memorable.

Now we have a decision to make. The Arizona Atlas & Gazetteer is wrong, of course, as it often is. You can’t go through the mine to get to Upper Burro Creek Wilderness. So let’s take Behm Mesa Road to Camp Wood instead. Not that Behm Mesa Road is called Behm Mesa Road here, but this must be it. Yep. Primitive Road, Not Maintained, Drive At Own Risk. This is our road, alright.

Two miles down the road we cross an unnamed stream. Three or four fellows standing around, grinning, drinking Coors in cans with cozies. Twenty-five miles to go to Camp Wood. Will probably take about two hours and perhaps be a bit stressful. Good time to stop for lunch, then. Have a beer. Do some spiritual reading. Abbey, of course. The Journey Home.

Poor, God-obsessed man. Ed can’t go four pages without dragging God into whatever the hell he’s writing about, tweaking him, interrogating him, sometimes coming dangerously close to worshipping him. A refreshing change from more conventional theology.

Ed’s dad was an atheist, and a socialist. You had to love him to like him. His mother, though, was of a cheerier disposition. A piano-playing Christian of simple but unshakeable faith. This may be the one thing Abbey and I have in common. And like old Mrs. Abbey, my mother is also buried in a country graveyard. We used to play in it. Tear down the paths in our three-wheelers and four-wheelers, chasing one poor footbound soul in a game we called Running Man. (The point was to get within a few feet of the guy without running him over. This was difficult to do, however, when he would cheat, as we all eventually would, by climbing a grain bin.) We would camp in the adjoining woods, telling ghost stories and lurid, incoherent tales about the satanists who visited the cemetery at night.

The beer goes quickly. Best get back on the road, see whether it actually goes where the map says it goes. It immediately climbs out of the valley and begins to cling to the side of a mesa, the top a couple hundred feet above, inviting me to stop, climb, have a look. But no, must keep going. The wildflowers—cowpen daisies, penstemon, fleabane, et al.—are temptation enough. Forge ahead. File it all away for a future camping trip. All of this will still be here long after we’re gone. I mean, there’s no copper around here, right? Or oil?

After an hour or so I come to a fork. The road to Camp Wood angles left, up a precarious-looking slope. But this is what the little Jeep loves, and in a few moments we’re safely on top of the mesa. Pinyon-juniper forest now, and noticeably cooler.

I come to a farm. One, single, isolated cow-and-horse operation at the very top of the mesa’s gently sloping crown. Windy. I get out to open the gate, which is adorned by stickers admonishing me to “Keep Moving. Occupied Structures Next ½ Mile. Brewer For Governor. Repeal ObamaCare.” The first item I can promise, but not the last.

The gusting winds up here remind me of home. Especially the tornadoes that my mother so feared. On late summer stormy nights when my father was gone, she would shove us kids into the basement whenever she heard the rumble of an oncoming freight, telltale sign of a twister. Only problem was that our house was sixty feet away from the train tracks. We would all laugh with relief when we heard the “tornado’s” whistle.

I eventually come past Yolo Ranch and arrive in Camp Wood. There is no “camp” here, no buildings at all. Just a junction with a rutted forest-service road, a couple of trailheads, and some clearings in a small forest of ponderosa pines. It’s beautiful, but I’m no longer in the mood for scenery or for pondering. Now I just want to have a decent meal.

In another hour and a half, I arrive at the brewpub in Prescott. Time to bring this traveling wake to an end. We never had any alcohol in our house, and my mother was deeply troubled when my brother dropped out of college to tend bar. “Jesus turned the water into wine, not the wine into water, Mom.” To this theological insight she had no comeback, but she worried nonetheless.

Worried even as the Lewy Body dementia took its inevitable course, slowly robbing her first of memory, then of movement. Like a cross between Alzheimer’s and Parkinson’s. No fun at all.

Her personality would change, we were warned. But it didn’t. Her cheerfulness and joy were too deeply rooted, too authentic. Or so I like to think. She had the usual anxieties, but they never overcame her submission to circumstance. To God’s will, as she would have said, really meaning it. She spent most of her final years laughing, just as she had her years of health.

A loving yet non-smothering mom. I know that those are hard to come by. Left her children with warm memories but no complexes—none that are her fault, anyway. For her, on this anniversary, I raise a glass in gratitude and ask her to pray for me. And to look up Cactus Ed’s mother.

The Narrows of the Hassayampa