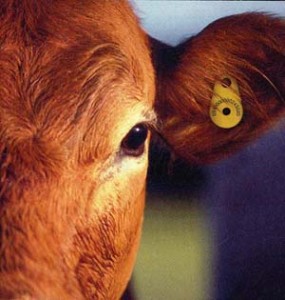 Last Friday in Louisville, Kentucky, the city’s Department of Health and Wellness issued a cease-and-desist order to the Whole Life Buying Club, and then placed the organization’s milk cache under quarantine. Since the contraband milk has not been pasteurized – it comes directly from a small farm located outside the city – officials deemed it a potential threat to public health and safety.

In response about 40 members of the club picked up their milk as usual, after having signed the following declaration:

I, the undersigned, hereby declare that I have taken my milk that comes from cows I own via private contract under the protection of the KY constitution (articles 1,2,4,6,10,16,26), and if the county health department would like to speak with me about this matter, I can be reached at the number given below.

As the collective statement of club members indicates, there is a legal twist here, in that nobody can be “guilty” of either selling or buying contraband milk because the milk itself undergoes no transaction – rather, club membership entails purchasing a share in the cattle that supply the club. In other words, the health department was trying to regulate club members’ access to milk from their own cows.

For those who don’t know, raw milk has become increasingly popular in recent years, even as federal and state health agencies have sought to suppress its consumption through highly aggressive campaigns. The impression created by the FDA’s anti-raw milk literature – and by federal sting operations, such as the one that foiled Amish dairy mastermind Dan Allgyer – makes one wonder why the Department of Homeland Security is so slow to get in on the action. It is, after all, only a matter of time before a vengeful Al Q’aida gets the bright idea of weaponizing the stuff.

Certainly cui bono? applies. To keep employed, Beltway locusts must come up with work for themselves – i.e., find new ways to justify meddling in everybody else’s lives. It is, furthermore, hard not to notice the longstanding chummy relationship between our incorruptible public servants and corporate agribusiness. More theoretically, those trying to understand the ongoing expansion of FDA power might resort to Tacitus’ belief that the more corrupted a society is, the more numerous are its laws – a belief revived and revised into the concept of “anarcho-tyranny” by the late Samuel Francis of Chronicles.

Yet above all the fetish about pasteurization highlights the contemporary zeitgeist of hygenic morality and its yearning for a sanitized utopia. Without scientists, social engineers, and metropolitan health & wellness departments to save them, of course Kentuckians would all slide back down into an existence somewhat resembling that of their ancestors – and Ford knows we wouldn’t want that. Sterility is next to godliness, per the new dispensation; say what you like about the tragic-mad Nietzsche, the tortured man spoke truth when he warned that our antiseptic liberal age “promise[s] to invent a way of life which refrains from all organic functions.” As a boy I once read a sci-fi story depicting a future hydroponic society, the inhabitants of which get nauseous at the thought of eating “filthy” dirt-grown food; today in the real world I’m told that there are indeed those who find the smell of manure from a barn more repulsive than the unnatural odor from a chemical plant. No doubt there is some nanotech engineer hard at work somewhere designing a milk-synthesizer, so we might happily eliminate not only the hick farmer but even the foul cows.

Contempt for the very earth and the traditions from whence we come is one symptom of hubris. Another is what biochemist-gadfly Erwin Chargaff described as “galloping expertitis” – modern society’s tendency to mistake a parcel of facts for omniscience. Given that the technocratic establishment spent years countenancing and even encouraging cow cannibalism, crop monoculture, the use of artificial growth hormones and DDT, and a petroleum-dependent food distribution system, only such expertitis can explain the experts’ continued expectation of being treated as infallible oracles.

As for Louisville’s MiniWel in particular, as of this writing its representatives have conceded that the quarantine has no legal basis – yet evidently regard miscreant raw milk drinkers as undeserving of an apology. It seems hunting the White Whale is so important that there is no time to express the slightest hint of embarrassment (much less remorse) at having been caught out-of-bounds: OK, OK, so we overstepped our authority – so what? We’re still right and we know it, and what you need, comrade, is a tall, cool, frothy glass of USDA-approved shut-the-hell-up.

To top it all off, now the same Know-It-All expert class that uncritically peddled the miracles of industrial agriculture has the nerve to adopt a zero-tolerance policy toward a natural form of food. Hesiod was on to something when he identified Shame as a god who dooms a country by departing from it.