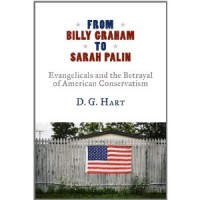 you happen to live in western Michigan, and don’t have any plans for this Saturday, you may be interested in coming to Grand Rapids to hear me give a talk based on my new book, From Billy Graham to Sarah Palin: Evangelicals and the Betrayal of American Conservatism. The time is 10:00 am and the place is the Eerdmans bookstore, located at 2140 Oak Industrial Dr. NE, Grand Rapids, MI 49505.

The following is an excerpt from the introduction:

The faith and piety of evangelical Protestantism has no direct or obvious tie to political conservatism. To insist upon a conversion experience or new birth, to regard the Bible as the sole source of truth, to emphasize the personal nature of Christ’s saving work, and to look for evidence of true faith in a life devoted to godly or holy living – these evangelical attributes are hardly foundational for an account of a good, ordered, and free society. Actually, political historians from the ethno-cultural school have detected parallels between the revivals and reforms of the Second Great Awakening (1810-1850) and the understanding of the United States that first the Whig and then the Republican parties embraced. Unlike Democrats who advocated a limited, populist government that did not legislate social behavior but rather gave room for the expression of self-interest and local autonomy, Republicans trusted government to enact laws based on eternal truths that would nurture virtuous citizens and build a righteous society. Generally speaking, since 1830 Anglo-American Protestants who supported revivals have been more comfortable with a state that promotes Christian norms as national standards than with a political order that cultivates religious diversity and the integrity of mediating institutions.

At bottom, evangelical moral idealism is at odds with political conservatism, as odd as that may sound. If conservatism were simply about public morality and virtues, then the habit of pundits and scholars referring to born-again Protestants as “social conservatives” would make sense. But such conservatism did not characterize the Right prior to the Reagan coalition. Indeed, a plausible perspective on post-1950 conservatism is that evangelicals were interlopers within the American Right because they knew so little of the concerns of conservatives. To be sure, evangelicals spoke the language of limited government and free markets not only to gain a hearing but also because such ideas are part of the fabric of American politics. Nevertheless, evangelicals’ moral idealism was alien to American conservatism. In fact, a moral conservatism divorced from either prior political or philosophical considerations leads inevitably to the kind of radicalism and social engineering that conservatives have historically opposed. Yet, the rub for evangelicals is that to insist that public morality needs to be grounded in philosophical or political considerations is to deny the priority of faith to all aspects of human existence; it is to suggest that Christ or the prophet Amos needs to take notes from lectures by Aristotle, John Locke, or James Madison.

I’d be glad for the presence of other FroPo’s and I apologize for this act of shameless self-promotion. Hope to see you Saturday in Grand Rapids.