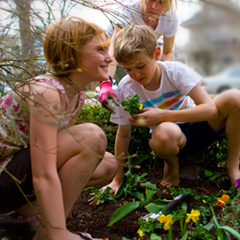 This event was held in the building which, during the 1920s and ’30s, housed The Comintern, or Communist International–imagine the ghosts prowling there in the night! It is now part of the campus of the Russian State Social University, a relatively new and large institution, with a strong social conservative as its President.

One of the lives claimed in the Gulag of the 1930’s was that of Alexander Chayanov. An agricultural economist of unusual insight, Chayanov did most of his work here in Moscow and was well on his way to constructing a compelling theory of what he called the “natural family economy.” Alas, his intellectual project was cut short by imprisonment and eventual death. All the same, he left behind a body of work that—I argue—still illuminates the nature of a true family-centered economy. Moreover, I contend that family reconstruction and demographic renewal depend on recovering some aspects of Chayanov’s idea of the natural family economy.

Alexander Chayanov studied a Russian agrarian order which, as late as 1914, still counted about 85 percent of the population on peasant or family farms. Where Communist and Liberal Capitalist theorists of the era agreed that such small-scale agriculture was surely and properly doomed in the modern industrial era, Chayanov dissented. He insisted that history was not necessarily moving toward pure capitalism or total communism, that the peasantry need not disappear, and that “the peasant family labor farm” could “remain the same, always changing in particular features and adapting to the circumstances surrounding the national economy.”[i]

Chayanov made the compelling argument that the true nature of the family farm economy could not even be understood by using the categories of either Marxist or Manchester Liberal analysis. Peasant farms, for example, rarely applied the category of wages to their operation, and had little use as well for conventional understandings of profit, capital accumulation, interest, or land rent. These facts alone led Chayanov and his colleagues in Moscow’s “Organization and Production School” to develop a new system of accounting, one suited to peasant farm inputs and outputs.

More broadly, Chayanov’s theories provide—in historian Teodor Shanin’s words—a “conceptual rearmament” of the micro-economy of the family farm.[ii] Among his key propositions, Chayanov stresses that human biology, not “class conflict” or “marginal utility,” drives the peasant economy. Economic development, in his words, rests on “demographic differentiation which depends [in turn] on biological family growth.” By family, Chayanov means “the purely biological concept of the married couple, living together with their [children] and aged representation of the older generation.”[iii] His emphasis on a farm’s sexual division of labor also “turns marriage into a necessary condition of fully-fledged peasantship.”[iv] Moreover, Chayanov’s “natural family economy” assumes a robust fertility. Indeed, his whole theory rests on what economist Daniel Thorner calls “the natural history” of a family, as rural couples marry, bear an average of nine children, settle those children on land, and then retire.[v] As economic historian Mark Harrison summarizes:

Peasant economy reproduces itself through the family. The family is the progenitor of the family life-cycle and of population growth. It is the owner of property. As such, it expresses the fact that the aim of production is household consumption, not feudal rent or bourgeois profit.[vi]

Chayanov also emphasizes that the family itself is a “work unit,” with family members fundamentally bonded to each other: husband and wife need each other to survive and prosper; and they, in turn, need children to prosper and survive. As Chayanov puts it, “peasant farms are structured to conform to the optimal degree [which mobilizes] the family labor force.”[vii] His central point is simple: shared labor in a common enterprise binds the family together.

All this, though, took place a century ago. An agriculture built on family-farming appears to be gone. The Russian and Ukrainian peasantries were decimated by the collectivization and “de-kulakization” drives of the early 1930’s. Curiously, the American family-farming sector was also decimated, albeit later—after 1940—and without physical violence. All the same, a shift in government policy was involved, and the end result was identical: industrialized agriculture and the near-disappearance of the small family farm.[viii]

And yet, there are broader lessons in family- and population-policy to be found within the theory of Alexander Chayanov. Most importantly, even in our day, strong families and large families—those with many children—are usually families that still claim a real home economy: not just one of consumption, but one of production as well. A living American writer very  much in sympathy with the spirit of Alexander Chayanov is Wendell Berry. Like Professor Anatoly Antonov a poet—as well as a novelist and essayist—Wendell Berry insists that any hope for rebuilding a nation’s life on the principles of freedom and family depends on bringing functions—real functions—back into the family home. Berry writes: “We are going to have to gather up the fragments of knowledge and responsibility” that have been turned over to governments and corporations during the 20th Century and “put those fragments back together again in our own minds and in our families and households and neighborhoods.”[ix]

The great Russian-American sociologist Pitirim Sorokin himself had lamented the “loss of function” as both a central cause and symptom of family decline. As he wrote in The Crisis of Our Age: “In the past the family was the foremost educational agency for the young. Some hundred years ago it was well-nigh the sole educator for a vast proportion of the younger generation. At the present time its educational functions have shrunk enormously…. In these respects the family has forfeited the greater part of its former prerogatives.” Sorokin pointed as well to the loss of religious, recreational, and subsistence functions. He concluded: “Now families are small, and their members are soon scattered…. The result is that the family home turns into a mere ‘overnight parking place.’”[x]

The diagnoses of familial decay offered by Alexander Chayanov, Wendell Berry, and Pitirim Sorokin are quite similar. Do they point to a common response? The answer, I believe, is yes: Simply put, societies need to recover and renew the natural family economy; societies need to chart a return of certain economic functions—broadly understood—to the home. What might this mean? In the spirit particularly of Chayanov, allow me to offer specifics, ranging from the simple and easily forgotten to the, perhaps, surprising:

–First and most simply: new mothers should breastfeed their babies. Wendell Berry calls this the “last form of home production,” and one that women have wisely refused to surrender.[xi] Breastfeeding also is in harmony with natural maternal hormones and instincts and encourages additional births.

–Second, all families should aim at some level of symbolic, home-based agriculture. A family vegetable garden; simple animal husbandry; even vegetables grown on an apartment balcony: these become centers of shared family work, symbolize a family commitment to provisioning, and so contribute to family solidarity and autonomy.

–Third, governments should protect small-scale, communitarian agriculture. In his new book, Shall the Religious Inherit the Earth?, British political scientist Eric Kaufmann answers “yes.” He points to religiously-grounded farm communities such as the Old Order Amish and Hutterites in North America and the Laestadian Lutherans of Finland as “the future of the [human] race.” With Total Fertility Rates of 5.0 to 9.0, these groups are growing at near-explosive rates. The Amish in America, for example, counted only 5000 members in 1900; in 2011, this number approaches 300,000. Almost all this gain has come from natural growth, and it continues into the 21st Century, while the rest of the developed world shrinks.[xii] Compounded over another four generations, the change becomes revolutionary. Governments cannot order up such behavior; but they can welcome, favor, and protect such groups.

–Fourth, governments should protect and encourage home schools. The most unexpected and remarkable populist movement in America during the last three decades has been the rapid growth of home schools: counting less than 50,000 students in 1980, the number approaches 3 million today. Viewed historically, these post-modern families have—in effect—responded to Sorokin’s lament and have brought the critical education function back home. Home-schooled children in America, on balance, exceed their public- and private-school counterparts in terms of achievement and creativity. Relative to family life, virtually all home-schooled students are in married couple homes. And there is a strong, positive fertility effect: 62 percent of these families have three or more children, compared to only 20 percent nationwide; and over a third have four or more children, compared to a mere 6 percent of all households.[xiii]

–Fifth, governments should favor family-owned micro-enterprises. The most socially disruptive effect of the industrial revolution was the way it severed the place where adults work from the place where adults live. Most of our current family questions—from loud disputes over gender roles to child care to low fertility—derive from this great disruption. Remarkably, the 21st Century has been blessed by technologies that can help to restore the bond between workplace and home: notably the home computer and the internet. Accordingly, tax systems should favor new, home-based, family micro-enterprises. Financial bodies should mobilize capital, at favorable rates, for these family entities. State regulations should protect these family businesses from the depredations and intrigues of the big corporations.

–And seventh, tax policy should favor the mother-at-home and families with many children. The mother in the home is a necessary component of a full “natural family economy.” “Income splitting” by married couples within a progressive income tax structure should be the rule. Full-time mothers should also receive generous credits toward public pension plans, with their benefits raised according to number of children. Couples with dependent children should receive substantial income tax deductions and/or credits according to family size. At middle income levels, those with three or more children should pay no income tax at all. The American record suggests that such policies predictably have a strong pro-natalist effect.[xiv]

[viii] Only recently has the small-farm sector begun to revive in the United States. See: Allan Carlson, “Agrarianism Reborn: On the Curious Return of the Small Family Farm,” Intercollegiate Review 42 (Spring 2008): 13-23.

[xii] Eric Kaufmann, Shall the Religious Inherit the Earth? Demography and Politics in the Twenty-first Century (London: Profile Books, 2010): 35-39.

[xiv] Leslie Wittington, “Taxes and the Family: The Impact of the Tax Exemption for Dependents on Marital Fertility,” Demography 29 (May 1992): 220-21; and L.A. Wittington, J. Alan, and H.E. Peters, “Fertility and the Personal Exemption: Implicit Pronatalist Policy in the United States,” The American Economic Review 80 (June 1990): 545-56.