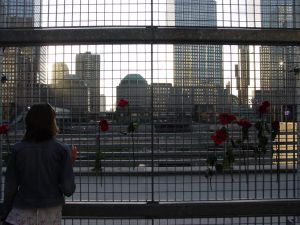 Brace yourselves: the anniversary of the September 11 terrorist attack means the return of the professional Explainers in our national media for yet another round of Big Picture commentary. Lots of analysis of the Middle East and terrorist psychology, with maybe a glance at Mayor Bloomberg’s somewhat tone-deaf handling of the event.

What I’m not expecting to hear is anyone asking how it was that about 25,000 people in the towers aided each other in an orderly evacuation, without which the casualty count would have been much higher than 2,603.

Similarly, while the Dunkirk evacuation required ten days (and was admittedly conducted under fire), the ad hoc armada of civilian boats approaching the dust cloud enveloping lower Manhattan brought out a much bigger number in much less time. How, in the immediate aftermath of such calamity, were such things even possible?

Numerous concentric circles of support ringed the disaster site, we now know, as well as spontaneously assembled collection sites, comissaries and supply chains which formed to support the workers on what they called the Pile and the media would call Ground Zero. Many of these workers were volunteers—engineers, construction workers, medics, welders, priests, rabbis—who collectively formed one of the largest disaster convergences in history.

And many of these people found or created useful roles in which they continued as part of the response effort for several months or more. New non-profit agencies were born, as we once again discovered the value of the actions of non-experts, self-organizing.

Equally remarkable was the minimal reporting of any panic on the part of the evacuees. Instead, we hear dozens of stories of selfless actions taken by the stronger to help the weaker or slower during the first terrifying hours.

Crisis builds solidarity, certainly. And it helped that New Yorkers are relatively accustomed to pedestrian travel, amidst a diverse population.

But the notion I’d like the Explainers to take on is that of post-traumatic growth, an idea brilliant unpacked by Rebecca Solnit last year in her book A Paradise Built in Hell. As she argues, the unlikely truth is this: disasters occasion not only suffering (for the direct victims) but also joy (for the others). They reveal our yearnings for community, purposefulness and meaningful work.

A second key point of hers—one with wonderfully radical implications—is that the history of disasters shows that there’s usually a second disaster behind a first one. The second is born of the overlapping beliefs of the government and the media that people cannot be trusted. Hundreds died after Hurricane Katrina, she notes, because authorities thought them too dangerous to evacuate or even to rescue from hospitals, Worse, the usual and largely groundless rumors of looting caused many rescuers to regard the victims as enemies. (Nonetheless, in Katrina’s aftermath some 200,000 people offered to put up strangers in their homes.)

So are we a chaotic, selfish species that should be fearful of each other? Solnit’s review of catastrophes–starting with the 1906 San Francisco earthquake and on through the London Blitz and 1985 Mexico City earthquake—finds a different model of human behavior, one far from the pop-Hobbesianism we often sense behind our politics today. She is arguing that, despair of our neighbors as we may, a vital civil society actually lurks below the surface of all this social darwinism. “Our ideals are mostly latent, unleashed when the everyday forces that constrain them are released.”

Yet our elites often view these kinds of events very differently: they fear a change in power and typically anticipate “chaos”—meaning, “only we can be in control.” An example—the first of many in her book–is the record of city government in the 1906 San Francisco earthquake, when fears of mobs and looting meant the deaths of several hundred citizens by soldiers (17,000 of them) acting under the impression they were protecting property by forbidding hands-on firefighting, for example.

The term “elite panic” has been coined to describe this phenomenon. So here’s a thought experiment: would it likewise apply to the decision to invade Iraq? To our federal response to the 2008 financial collapse? What are we to make of Mikhail Gorbachev’s remark that the Chernobyl disaster (after which the Soviet government first concealed, then disclosed critical information) was more of a factor in the USSR’s collapse than his own policy of perestroika?

“The recovery of solidarity without crisis is the great contemporary task of being human,” Solnit summarizes, brilliantly. It’s arguable that our current economic slide is simply a crisis in slow-motion, however. Is it possible this ongoing loss of economic wealth is tied to a corresponding loss of “social poverty”? Which amounts to a gain in social capital in an inverse correlation?

Our disasters should be a kind of religious awakening. Putting it simplistically, disasters are crash courses in Buddhist principles (of non-attachment, compassion), as well as reminders of the Gospel notion of good coming out of evil. There occurs, Solnit observes, a kind of anarchic joy in these moments, when our mundane arrangements have fallen apart. We say to ourselves, “The whole world is falling apart, but I am who I was meant to be: a citizen, a rescuer, a resourceful person who belongs to and is serving a community.”