Front Porch Republic
Home Articles Philosophers & Saints George F. Will and the Decline of the Tory 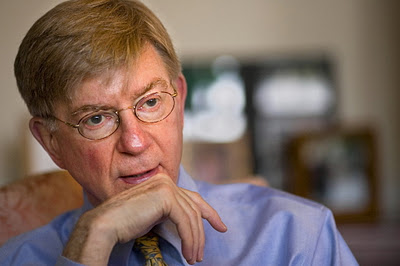 I don’t know how many people in the conservative public sphere read George F. Will closely any longer–maybe lots of them do, but as I don’t particularly identify myself with that sphere, I wouldn’t know. Perhaps he’s long since been filed away as predictable, establishment, whatever. But I’m pretty certain there was a time when the pronouncements of Will in his weekly columns carried a good deal of weight. They certainly did with me. Back in the 1980s, as a smart little Republican, I devoured the man’s writings. I had collections of all his old columns, never missed his bimonthly missive on the back page of Newsweek, and imitated his style whenever I could. I watched “This Week with David Brinkley” whenever I could, because Will was on there; when he showed up on “Donahue” or “Late Nate with David Letterman” (yes, he actually appeared on that show), I caught that too. Here’s how much of Republican intellectual dork I was back then: in my senior picture in our high school yearbook, I’m visibly clutching a copy of Will’s Statecraft as Soucraft: What Government Does, which remains his best book.

Unfortunately, also his only good book, and one that I doubt he could write today even if he wanted to, which clearly he doesn’t. (I say unfortunately because it’s a great book; I use it regularly in classes of mine today.) I don’t know when Will’s weekly pontifications lost their appeal to me; perhaps during the first Bush administration, when his irrational dislike for George Herbert Walker Bush came through in his arguments almost palpably. In any case, by the 1990s my evolution towards the left end of the political spectrum was well underway, and there came a time when running across a Will column would remind me that I hadn’t checked out his writings for years. I wonder how much that remains the case for conservative activists today. Certainly, from what I can tell, most of those on the left don’t even bother attacking his by-now exceedingly predictable, however erudite and intellectually sophisticated arguments any more; by the Clinton years Will was, with all his eloquence, still just another pretty reliable straight-laced Republican voice, and despite occasionally expressing some dislike of different elements of this or that aspect of the second Bush administration’s policies, for the past 15 years he’s remained that way. 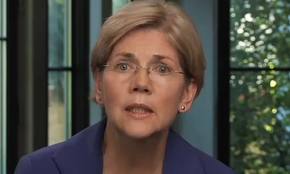 It’s been interesting, then, to see Will’s recent attack on Elizabeth Warren, the Harvard law professor who helped design the Obama administration’s Consumer Financial Protection Bureau and has just announced her candidacy for the U.S. Senate, receive such a thorough trashing in different parts of the mainstream media. Response from E.J. Dionne in The Washington Post, or Bill Galston in The New Republic perhaps aren’t surprising, but for Rod Dreher to spend not one but two of his posts on the American Conservative website addressing the weakness of Will’s argument against Warren has to raise at least a couple of eyebrows. I don’t see a need to rehash all of this; suffice to say that Will’s attacks on Warren as a closeted collectivist, seeking to promote a government which will “socialize–i.e., conscript–whatever portion [of people’s wealth] it considers its share,” thereby “intimat[ing] the impossibility” of an individual being able “to govern oneself,” are frankly stupid. If Warren genuinely was an advocate of some kind of democratic state socialization, with an agenda to subject financial institutions like banks to nationalization, and to raise redistributive tax rates to those which exist in Sweden, that would be genuinely interesting. But of course, that’s not the case. Instead, what we have is an apparently quite smart but nonetheless standard technocratic liberal making exactly the sort of populist noises that us on the left have been wondering why Obama hasn’t been making for years. For Will to claim that Warren is part of a continuing movement to undermine the traditional liberal basics of the social contract, he has his work cut out for him.

So what’s most interesting here isn’t Warren, but Will. Because the man who wrote Statecraft as Soulcraft made it very clear that he wasn’t particularly enamored with the “traditional liberal basics” of the social contract either; on the contrary, he consistently pursued, in that book and through his columns and other writings, a much more classically republican or Tory position. Galston touches on this, reminding Will of his often-quoted Burkean argument that the social contract is much more than just protecting whatever wealth an individual has been able to accumulate (there are, for example, generations past and generations yet to come to consider…); and Dionne brings up the book itself, quoting Will on the fact that a reflexive anti-government attitude leaves us with a sense of community that is pretty thin. But the real decline of Will from a fairly unique (at least amongst the mainstream media) exponent of an “Oxford Movement”-style conservatism (the label which Will said in that book best describes his own views) to a position today which is perhaps only a step or two above the socialist-mongering common amongst the contemporary Republican party…well, it’s a little tragic to behold.

In Statecraft as Soulcraft, he thoughtfully argued:

Common sense, reason and history all teach that “strong government conservatism” is not a contradiction in terms….I will do many things for my country, but I will not pretend that the careers of, say, Ronald Reagan and Franklin Roosevelt involve serious philosophical differences. Reagan’s fierce and ideological liberalism of the Manchester school and F.D.R.’s mild and improvised social-democratic program are both honorable persuasions….They are versions of the basic program of the liberal-democratic impulse that was born with Machiavelli and Hobbes. Near the core of the philosophy of modern liberalism, as it descends from those two men, is an inadequacy that is becoming glaring. [Anti-government] conservatism is an impotent critic of liberalism because it too is a participant in the modern [liberal] political enterprise (p. 23).

In other words, as many writers at Front Porch Republic have noted, American conservatism is simply a variation upon a particular, rather individualistic take, on the idea of the social contract which is common to the United States, both left and right. Will, at one time, could have made a criticism of Warren, and President Obama as well, from that basis–but perhaps too many years on the inside of the Republican party has shifted him towards a default libertarianism, in which the individual’s prerogatives, at least insofar as the entirety of their property is concerned, are to be privileged at the outset, a shift which allows him to characterize any discussion about taxation and regulation as “collectivism.” He used to know better than that.

[I]t is a non sequitur to say that because the state has a monopoly on legitimate coercion, its essence is [therefore] coercion….Proper conservatives proclaim, as Burke did, the gentling function of government. Proper conservatism teaches that…government exists to frame arrangements in order that they may, over time, become matters of trust. The enlargement of the realm of social trust does not presage the withering away of the state. But it does conduce to an increasingly comfortable fit between [government] institutions and the public, which, like a flowing river, is both a shaper of and shaped by the institutional “banks” between which it flows….[A] river without banks is incomprehensible; it is a contradiction in terms (pp. 95-96).

What about the argument that those banks have grown too large and are crowding us, that the political agenda of people like Warren and Obama are preventing individuals from building up those intermediate and democratic institutions which are the sort of banks real conservatives ought to praise? Today, it seems likely that Will might say exactly that; 30 years ago, he was willing to say something a little different:

[I]nstitutions that once were most directly responsible for tempering individuals–family, church, voluntary associations, town governments–with collective concerns [imagine: “collectivism”!] have come to seem more peripheral. Using [the central] government discriminatingly but energetically to strengthen these institutions is part of the natural program of conservatives. Far from being a rationale for statism, the political orientation I praise envisions prophylactic doses of government. It involves the use of government to prevent statism by enhancing the social competence of citizens….One way the government strengthens such institutions is by not usurping their functions. But that is not the only way. Government can plan positive inducements to vigor (pp. 151-152).

Now what we see here is the outlines of genuinely interesting argument, an argument between an American-style Tory and a progressive American liberal: is the Consumer Financial Protection Bureau–or, for that matter, President Obama’s Affordable Care Act, or any kind of social insurance or income redistribution program, whether Social Security or Medicare or Medicaid or the Veteran’s Administration or just about anything else–a government program capable of “strengthening” citizens in their ability to contribute positively, through various local institutions, to the development of their communities (including the American community), or is it an instance of individual responsibility or local organizations being “usurped,” thus contributing to the degradation of the citizenry? Presumably, the answer would differ in each case, because in each case we would be looking at a distinct government program with a distinct agenda serving a distinct population and funded through a distinct system of taxation. The Tory conservatism which Will used to endorse (and–who knows?–perhaps still does, behind the closed doors of his columns’ words) would have quickly acknowledged this kind of prudential judgment. But today, to admit, much less to intelligently engage, in that kind of argument requires one to acknowledge that there is more going on in contemporary politics than those who want to defend the One and Only True individualistic take on the social contract, and those who hate individual freedom and thus want to change the contract. Politics isn’t that tidy, and we shouldn’t pretend it can be.

Will ended Statecraft as Soulcraft with warning: that if conservatives were going to be able to add anything to this kind of argument over the balancing of various prudential demands and needs, they needed to face up to the fact “that government, although of human manufacture, is ‘natural’…as natural to man as clothes and shelter because it serves needs that are natural to man” (p. 160). There is an argument going on this country, to be sure, and it is an important one–but those who take the Tory side are few and far between. That’s a loss, and not just for a columnist who used to regularly have interesting ideas to go along with his very pretty words.

[Note: I just noticed that Scott Galupo made this same argument, months ago–though as a self-identified conservative, he may be able to make it much better than I. Check his take on Will’s decline out here.]

Do Conservatives Need to Belong to A Minority to Get an...