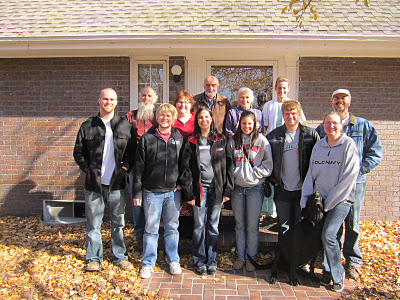 As Christmas and the end of 2011 approaches, I find myself thinking gratefully about what Leroy Hershberger has enabled my students and me to learn this year, and what that learning has meant to me. Leroy (the bearded gent on the far left of the second row) and his family have twice this year (first on the excursion linked to above, and more recently as a contribution to my class on “Simplicity and Sustainability”) generously opened their home to my students and me, enabling us to observe, visit with, and learn from various local farmers, producers, and homesteaders living and working in Reno County west of us here in Wichita, KS. I doubt the Hershbergers would necessary agree fully with the conclusions I’ve drawn from these “Local Food Tours,” but I’ll stand by them nonetheless: what the people we learned from are doing, in developing locally and from the ground up their own markets and strategies for producing and providing food, is a fulfillment of some (not all, but some) of the best aims of the whole Occupy Wall Street movement. They are, in other words, in their own–usually religious, usually conservative, always humble–ways, radicals and anarchists and utopians and occupiers, every one of them. 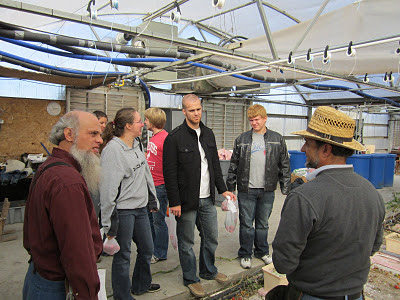 Consider John Miller and his family, for example. Twice we’ve taken a fascinating tour of what the Millers–through their company, Cheney Lake Tomatoes–have accomplished, and it’s eye-opening. They’ve turned themselves into thriving year-around tomato producers, selling their produce at local markets and stores throughout the area. On the one hand, it is thoroughly small-scale, low-tech operation: the Millers themselves provide all the labor, and John Miller himself has designed and maintains all the often jury-rigged machinery necessary to rotate his crops and keep them flourishing. The greenhouses are heated by pipes carrying water from wells that the Millers dug themselves, and the heating come from wood chips that power a furnace they also made themselves. The wood is just scrap which they collect from all over the county. The result is an essentially cost-free–and environmentally clean–way of providing an essential component of his business. Pretty simple and sustainable, yes? 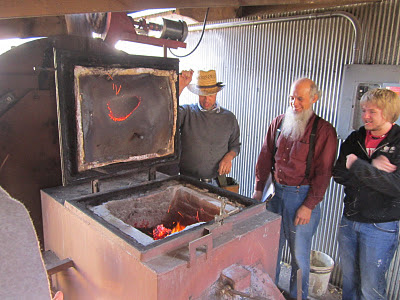 Yet on the other hand, he makes use of some pretty sophisticated growing practices and resources to increase productivity (planting his tomatoes in perlite instead of soil, for example, or depending upon shipments of bumblebees to keep his plants pollinated). There is nothing ideologically pure about what he is doing, but the results have ideological importance all the same: in having constructed a business without extensive dependence upon cross-country marketing or massive investment of capital, he’s an example of the sort of practical economic self-sufficiency that could be actually achievable more broadly, assuming the corporate powers which dominate markets, buy off governments, and drive up the burdens and costs for small-scale producers could be, shall we say, persuaded to get the hell out of the way. 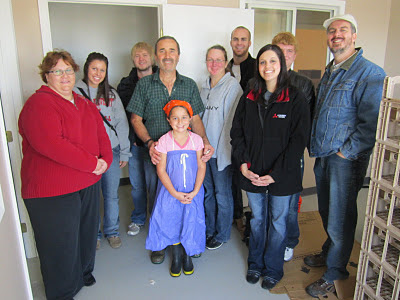 Or consider Phil Nisly and the Nisly’s family farm, from which my wife and I have bought chicken and eggs for years, and which just this year took a step they’d been planning and saving for years for: setting up their own processing facility, so they would have complete ownership over the food that they’d built their family business upon. We visited Phil’s facility a week before Thanksgiving, and they processed close to 200 turkeys that day. They were busy, to say the least, and they looked it. But he proudly showed us around the facility, talking about how he–just a local farmer–was tapping into not just available markets but specialized ethnic ones as well, all across the state of Kansas and beyond. 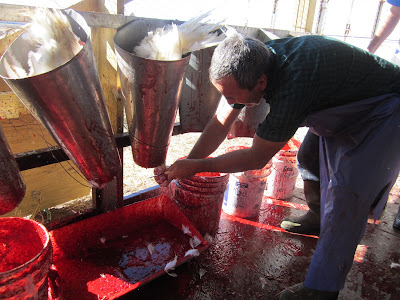 The real heart of Phil’s tour began with their slaughtering shed. Their turkeys are free-range, raised from chicks, and haven’t spent anytime (besides during the occasional stormy night or tornado threat) in cages up until the time Phil and the locals he’d hired for the day cut their throats. A couple of my students had a hard time dealing with what they were seeing, but it was good for them to see it–both in the sense of getting them a little more familiar with where their Thanksgiving turkeys come from (my family’s turkey this year was one of those you see in these pictures), as well as enabling them to appreciate the difference between a process done by hand–and all the tools and strategies which the Nislys have adapted their work to so as to keep those practices functional even as the demand for free-range, local turkeys has sky-rocketed–and one that is done impersonally and mechanically. 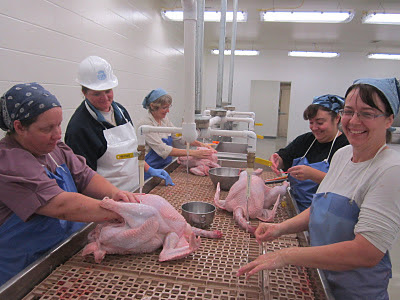 Phil and I have often talked about how he has worked with state and local officials whose job it is to inspect his family’s work; here, the on-site inspector is wearing the hard-hat, while Phil’s wife Lucy (with glasses) and some family friends continue the work. Phil’s a businessman, so he has his frustrations with accommodating the health, safety, and cleanliness demands of the state…and moreover, he recognizes that those demands in many ways come down harder on local producers like himself, because he–by choice and by necessity–does not rely so much upon the more easily (if less accurately) surveyed mechanical tools and assembly-line procedures which large agribusiness and meatpackers usually make use of. The upside, however, is learning how he and his family have developed friendly, trusting relationships with the inspectors over the years, and negotiated ways of keeping all of those interested in the process satisfied. (Interesting note: inspectors are harsher on the practices they are surveying when there are more than one of them in attendance; according to Phil, one inspector will make informed, reasonable judgments, whereas two will often end up trying to compensate for or over-inspect one another.)

I could go on with this–I could talk about the Borntrager’s Dairy, and the strategies they (and their customers!) pursue to make it easier for those who want to purchase some fresh, non-pasteurized, non-homogenized milk to do so. There was Dwight Miller and his family, who see their commitment to provide local milk and produce to their neighbors and to produce all the income they need from their own small plot of land in terms of a “ministry” which they had been called to. And wherever we went, we saw the relative absence of the same thing: high levels of debt, extensive financing packages, and disruptive economic burdens generated by big corporate players. Not that economies of scale were entirely absent from these producers lives; that was hardly the case. (John Miller imports his perlite from Sweden, Phil Nislys gets his chicks from Missouri, and the DFA is a major buyer for much of the milk produced by the Millers and Borntragers–though note that the DFA itself is a farmer-owned cooperative!). The best of these local farmers were continuing experimenting with better ways to make use of, without being dragged down by, the culture of bigness which surrounds them. For the most part, they seem to be doing quite well. 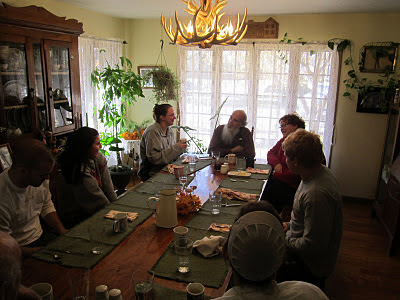 I think for most of my students, the highlight of the day was sitting down to a simple–yet for all that wonderfully filling–meal with the Hershbergers, and talking about farm life, about different approaches to education and building a family and learning a skill and filling one’s belly. Again, Leroy doesn’t come off as a radical, looking to “occupy” the contested spaces of our national life for the sake of the 99% who are mostly left out of the economic decisionmaking and the financial benefits which the elite in this country jealously (if perhaps sometimes unconsciously) protect. But, for a man like himself and his family, and for all those with whom we have spoken to and learned from this year, what better description could their be? They are, in all their own various and sometimes compromised ways, fighting against a huge, petro-chemical-powered, debt-financed, corporate-governed food industry, attempting to resist its dominance of prices and regulations by delivering something healthy, local, and sustainable. The small English village which is aiming at total food self-sufficiency is doing this; the marchers from the Farmers Coalition who joined the protesters at Zuccotti Park were doing this; the young farmers who are making tiny but real changes in the long-term decline of agriculture in America are doing it. Shannon Hayes, of Radical Homemakers fame, expressed the hope embodied in what Leroy has helped me my students and I to see very well:

My experience at the Sunday rally was one of the most moving four hours of my life, surrounded by hundreds of people who cared about the same issues I do: food sovereignty, the need for city people to start building soil and growing their own food, the need for rural and urban folks to build better relationships with each other to sidestep the corporate food system. I met dairy farmers, meat producers, seed producers, vegetable growers….even some friendly vegetarians. I met food activists, senior citizens concerned about the quality of food for their grandchildren, community gardeners, college students who were trying to learn how to feed themselves ethically and healthfully. We saw American flags, held up high. One of them led our march. And I saw a side of New York City that I’d never seen before. New Yorkers hung out their apartment windows, came to sit on their steps, sat out at cafes and stood in front of their small grocery stores and food stands. They cheered and clapped as we marched by. They sang and chanted with us. We marched through community gardens reclaimed from abandoned lots. I stepped on ground that was as lush and beautiful as any earth I tread upon here upstate.

The most poignant moment for me, however, was when our march passed through a community garden and I heard cheers from up above me. I looked up and saw four urban teenagers standing in a tree house. They waved and smiled, then held up a giant sign for us to read: This land will live again.

This land will live again. It will live in America’s countryside, in her mountains and rivers, as well as in her cities. To me, that’s what the Occupy movement is all about–finding ways for all living things to thrive. And for those of us in the grassfed farming community, that’s what we’re all about too.

Small farmers like the Millers or the Nislys struggle, and our national addiction to economic practices which keep those who would keep local producers down and on the edge of bankruptcy is a primary cause of that struggle. (See here for more on that.) But in their struggles, they are also finding, here and there, ways to succeed and even flourish, because there are people like you and me who see people like the Hershbergers and recognize: living that way, eating that way, simplifying in that way, isn’t a utopian dream–or even if it is utopian, it’s not out of reach, it’s achievable, its doable. All it takes is a willingness to explore different paths and make different compromises, to “occupy” a different way of thinking. It may not always be easy, but the results are simple, all the same.