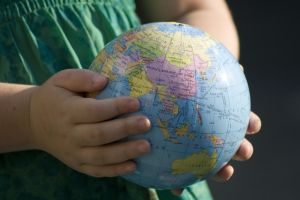 In the January 9, 2012 issue of Time magazine, Fareed Zakaria comments on what he calls “A Post-American World in Progress.”  Zakaria observes that none of the world’s rising powers, including the rapidly growing BRIC nations (Brazil, Russia, India, and China) have been able to shape international events because of their own domestic struggles.  He also remarks that the United States is no longer able to step in to influence regional or global currents due to its decline in relative world dominance.

Zakaria’s new article is an extension of the argument he made in his 2008 book, The Post-American World. In that book, he asserted that the United States was moving from world political and economic dominance, toward being an important part of a multi-polar world.  He maintained that this post-American future would probably not be a matter of the decline of the U.S., in an absolute sense, but of “the rise of the rest,” a pun  on William McNeill’s classic work of world history, The Rise of the West (1963). Zakaria traced the ascendance of new parts of the world to the spread of market economics, particularly during the years following the collapse of the Soviet Union. “The financial force that has powered the new [post-American] era,” Zakaria writes, “is the free movement of capital” (p. 3). The movement of capital is intimately linked to the flow of goods and services and, more to the point here, to the movement of people. In order to continue to be a major part of this increasingly multi-polar world, according to Zakaria, the United States needed to “globalize itself,” to become part of an economic and political network of nations.

Both in the book and in the new article, Zakaria may overestimate the extent to which the world was American even in the post-World War II pinnacle of U.S. influence. Plenty of nations did not do what we wanted them to do even in the 1950s and 1960s. Insofar as countries did align themselves with us or at least give lip service to following an American lead, this was largely due to the great competition between the United States and the Soviet Union, and the latter dominated a big part of the globe. Indeed, I think one could plausibly argue that the single greatest international achievement of the United States in its period of greatest absolute international sway was spending the Soviet Union into bankruptcy.

There are good reasons, moreover, to question whether having some nations strive to position themselves as global leaders is necessarily a good thing. Internationally, rather than seeing the domestic challenges of other nations as impediments to their direction of regional or global events, we should see their concentration on their own internal issues as paying attention to their proper business.  The less China or Russia meddles in the lives of people in other countries, the better. It is not simply that these countries would need to be efficiently centralized and externally directed in order to, say, attempt to address the financial crisis in Europe.  The direction of causation also works the other way. The more that Russia, for example is able to direct its attention toward European affairs and shape those affairs, the more power the Russian Federation government will have and the less real autonomy and self-direction the republics, provinces, and territories will have.

The American effort to dominate world events contributed to re-shaping our domestic political scene.  Within the United States, political power and activity in the years following World War II became decidedly less “multi-polar” as Washington, D.C. pulled control toward the national center, away from local and state governments.  The “American” role in world events was really a federal government role in both international and domestic affairs. The centralization of federal power in the United States corresponded with diminishing local self-government precisely during the time that our country attempted to play a dominant global part.

Concern over global competitiveness led policy makers, such as political economist Robert B. Reich, to argue that the United States needed a national industrial policy, directed by the federal government. Others might regard this type of economic strategy a form of “crony capitalism” and suggest that federal economic involvement, naturally favoring large firms and powerful lobbying organizations, helped to create the concentration of economic activity and wealth that characterizes the U.S. today. Every plan for a national industrial policy included educational directives as part of the overall project of federal administrative coordination.

The move toward national standardized testing took off in the 1980s, and proponents of standardization explicitly cited the need to be globally competitive as a rationale. The Charlottesville Education Summit took place in September 1989 atmosphere of urgency to train a more highly qualified workforce to increase America’s global competitiveness. Out of this centralizing imperative came the national education standards of Goals 2000, and then the No Child Left Behind and Race to the Top initiatives, both of which grew out of the 1965 Elementary and Secondary Education Act.

As we point out in the book, success has been questionable and the performance of the top students in public schools has actually gone down. Why did this happen?  We argue that it was because the functioning of public schools is heavily dependent on connections with local communities and that distant control and the effort to consolidate American schools into a single big system severed many of those connections and diminished the autonomy and self reliance of communities.  This loss of connections was accompanied by declines in immediate political power,

Education is, as I have suggested, just one of the examples of how a globalizing state has hollowed out its own base by drawing all energies toward the center.  Perhaps in many ways, then, the United States needs not to “globalize” itself but to “localize” itself, to allow a “rise of the rest” inside the U.S., as communities look to their own affairs.  From this perspective, our concern would not be how we can play a leadership role on the world or even who will play such a role, but how can the people in cities, towns, and rural areas across the United States build their own institutions and communities.

Carl L. Bankston III is an eighth generation native of what is now the State of Louisiana. He is currently employed as chair of the Department of Sociology at Tulane University.

At Least Small Communities Are Human