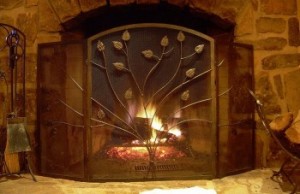 In 1852, the first piano arrived in Stockton, California. Imported from Cincinnati, it was a gift to Mary Kroh from her father, a minister who had traveled west to preach to the thousands of gold miners in California. Shortly after receiving it, Mary began to play the piano and her listeners were transfixed:

[Father] had occasion to answer a call at the front door and before closing he accidentally looked out, and to his surprise the sidewalks and porch were filled with old and young men. Along the side of the house stood scores of men in the street as far as the eye could see and some were sobbing. On entering the room he said, “We have an immense congregation outside. Get out your familiar tunes — ‘Home, Sweet Home.’ Etc.” He then drew aside the curtains and raised the windows, ‘Now, my children and friends, give these homesick sons and fathers a few songs more.’

The prospectors came back again and again to the Kroh’s porch in order to hear the piano music, for it reminded them of mothers, wives, and homes left behind.

A hundred and fifty years later, another adventurer went in search of opportunity, and her thoughts also turned homeward.  In 2004, the writer Katherine Lanpher moved from Minnesota to Manhattan: “My first week ended with a sharp bout of homesickness.” To cheer herself up she decided to get a manicure. She told the Korean woman who was doing her hands, “I’m pretty homesick,” but encountered little sympathy. The manicurist, herself far from home, looked at Lanpher with impatience. “Her eyes narrowed, she sucked in some breath, and then she barked out an uppercase admonition: ‘DON’T BE BIG BABY.’”

How did we move from being a society in which grown men openly wept when they felt homesick to one in which few adults feel comfortable admitting to the emotion, for fear of being labeled “big babies”? In other words, how did we learn to leave home? The history of homesickness offers a way to trace this education in mobility. It fills a gap in our understanding, for while nationalist narratives depict mobility as an innate trait of Americans, something they do easily and naturally, since the nation’s beginnings men and women of all races and backgrounds have wrestled with homesickness.  Only over the course of the twentieth century have Americans mastered the emotional style of individualism—a style which requires them to cut ties, move on, and express no homesickness in the process. And even so, in daily life they continue to quietly affirm a set of communal values that run counter to this restless individualism.

In popular mythology, Americans have always been happy movers — immigrants flocking to American shores, pioneers heading west, miners rushing to California, self-made men leaving farms for cities. In reality, however, the process of moving has often been extremely painful.  Without doubt it was most painful for those, like slaves, who were forced to leave their homes against their will. Solomon Northup, a free man carried into slavery in 1841, recalled of his bleak situation, “Thoughts of my family, of my wife and children, continually occupied my mind. When sleep overpowered me, I dreamed of them – dreamed I was again in Saratoga — that I could see their faces, and hear their voices calling me. Awakening from the pleasant phantasms of sleep to the bitter realities around me, I could but groan and weep.”

While Northup’s homesickness was particularly acute because of his bondage, it was an emotion that white Americans experienced too, even when their migrations were of their own choosing. In 1809, Archelaus Putnam left New Mills, Massachusetts, where he had been working for his brother, to try his luck at his own business, an apothecary shop in Lynn, some six miles away. He spoke of his departure as if he were traveling hundreds of miles, lamenting, “[I am leaving my] birthplace & abode . . . where reside my brothers, sisters, & near & familiar connexions. . . . [I am being] transplanted into an untried soil where it is doubtful if I shall take root & live, much more grow & flourish.” He did not last long in this foreign soil; within eight months he was back home, once again working for his brother.

Putnam migrated only a short distance, but he still felt homesickness acutely.  Far more difficult were the migrations across the continent that so many pioneers undertook.  Joel Brown, a miner in California, wrote his wife in 1852, “I expect that you will think . . . that I am crying to see my wife. Well suppose I am and what then? I am not the only one that is crying to see the wife and baby.” Brown was right, for each year on the Overland Trail, the stream of pioneers heading west encountered a sizeable counter-stream of “Go Backers,” trekking eastward in order to return home.   Thousands more stayed on in the West, but nursed longings for home for the rest of their lives.

Despite our national mythologies, these men and women on the move were hardly rugged individualists. Nineteenth-century Americans were willing to acknowledge and discuss the pain of migration, and were not shy about asserting their love of home and community. After all, a strong bond to home was honorable, since many believed that domestic life was the source of virtue and morality. Homesickness did not need to be repressed, for it reflected a loyal and sensitive nature.

Those who suffered from it were generally treated sympathetically. Since the late eighteenth century, Americans doctors had been using the term nostalgia to describe acute homesickness. Many believed nostalgia could kill, either by worsening existing illnesses or by causing a range of other debilitating symptoms, and the condition became a serious concern during the Civil War. The Surgeon General reported that over 5,000 Union soldiers suffered from nostalgia, and 74 actually died of it.  Consequently, some regiments prohibited bands from playing “Home, Sweet Home,” lest it render men nostalgic. For the most part, doctors showed compassion to homesick troops, often giving them a furlough, or in extreme cases, a discharge, to prevent them from dying of the disease.

This sympathetic approach to homesickness lasted through most of the nineteenth century. Attitudes began to change at the end of the century, however, in response to new ideological and economic imperatives. In an age when social Darwinist philosophies were influential, some saw homesickness as a sign of inferiority, for those who felt too much pain at parting were incapable of adapting to new environments. As one observer put it, “The less the degree of civilization, the greater is the love for the native country. Savages, men of the grossest civilization, and the most desolate climates, quit their country with great reluctance.” Others correlated homesickness to economic success.  Psychologist Linus Kline wrote in 1898 that “The lover of home is provincial, plodding and timid,” while “the migrant is cosmopolitan. . . . He may be found in the commercial, speculative, daring, progressive, macroscopic interests of the world.”

This tendency to denigrate the attachment to home only increased in the twentieth century. Psychologists like John Watson, an influential behaviorist of the 1920s and 30s, suggested that overly affectionate parents ruined their children by making them emotionally dependent and incapable of leaving home. “Mothers just don’t know, when they kiss their children and pick them up and rock them upon their knee, that they are slowly building up a human being totally unprepared to cope with the world it must later live in.”  To make children independent, he instructed parents: “[n]ever hug and kiss [children], never let them sit in your lap. If you must, kiss them once on the forehead when they say good night. Shake hands with them in the morning.” Other psychologists advised parents to send their children to visit relatives, in order “to prevent a strong emotional fixation or attachment to the home situation or to any item in it.”

Accompanying such advice were new institutional forces that also pressured Americans to leave home and to do so easily. Emerging bureaucracies required workers to affiliate with them and sever their connections to home. During World War II, the Army told homesick troops that they must overcome their “infantile dependence” on their parents and transfer their loyalties to the military. After the war ended, expanding corporations required employees to relocate if they hoped to advance. A common joke among IBM employees during the 1950s and 1960s was that the company’s name stood for “I’ve Been Moved.” IBM employees were hardly alone, for during the 1950s, roughly 20 percent of the U.S. population moved each year. Employees unwilling to relocate risked stalling their careers or losing their jobs. In The Organization Man, William Whyte reported, “‘We never plan to transfer,’ as one company president explains a bit dryly, ‘and we never make a man move. Of course, he kills his career if he doesn’t. But we never make him do it.’”  As an IBM executive explained, such moves were good for corporations, for it “makes our men interchangeable.”

Organizational society required workers to be fungible, mobile – and cheerful about it.  These are pressures that many Americans still feel, both from their employers, and from the larger culture. Modern psychology continues to counsel that young people should conquer homesickness early, and children’s books feature Big Bird and Elmo doing just that. For adolescents, camps and colleges are the training grounds for maturity, and it is expected that once they have moved through them they will be permanently cured of homesickness, ready to join modern society, and relocate as needed. Such expectations are strongly felt, and consequently, although many Americans are homesick, few speak of it overtly, for to do so would mark them as immature and maladjusted, dependent and weak, and unsuited to the demands of contemporary life.

Yet while Americans may not use the word homesick to describe their feelings, they frequently display it in daily life. It is evident in return migration patterns and declining mobility rates — from the hundreds of thousands of African Americans who have returned to the South after decades in the North, to the 20-40% of all foreign immigrants who eventually return to their native lands; from the “boomerang seniors” who, after careers spent elsewhere, are resettling in their hometowns, to the “boomerang kids” who return home after college. It is evident as well in mobility rates which have been steadily declining over the last several decades, indicating the widespread desire for roots and stability. In these patterns, Americans show that the lure of home is strong and the dream of return a powerful one.

The pull of home and the power of homesickness reflect the fact that while Americans have long publicly celebrated the tenets of rugged, independent individualism, in their daily lives and private conversations they have affirmed a very different set of values — values that center on family, and that affirm community, a sense of connection, and a commitment to place.

Susan J. Matt is author of Homesickness: An American History