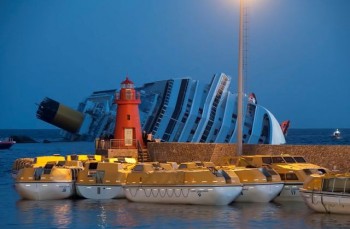 This might be idealized, but it’s a helpful image of the fraying and collapse of social and personal identity. And as Percy articulates so well, some of that fraying occurs because of the enervating effects of science and philosophy. Examining a thing is often its undoing; older certitudes are exposed, uncertainty results.

Reading some recent commentary in the Guardian on the Costa Concordia reminded me of the Percy reference. As you likely know, the captain abandoned ship, apparently “tripping” into a lifeboat in his attempt to help others escape. Later ordered to return to ship by the coastguard, he refused.

Bruce Hood asks if any of us know what we would do in similar circumstances, asking for at least some empathy for the captain. This is understandable. Of course we all like to think we would be courageous, would be noble, would fall on the grenade or go down with the ship, and we do not know what we would do.

All that’s fair, if not somewhat self-evident. But Hood presses on, and his commentary is a clear example of how science and philosophy can enervate moral certitude. He begins with science:

Self-preservation is an instinct, much in the same way that your instincts tell you to put your hands out for protection when you let yourself fall backwards. In the face of impending danger, our brains can swing into reflexive defence mode, operating much faster and more automatically than when they recourse to calm, rational reasoning. Respond first and ask questions later, is the message, rather than place yourself in harm’s way.

This is the “fight-or-flight response”, where our bodies flood with a cascade of hormones that mobilise the body for action.

OK, that’s true. Self-preservation is an instinct, hormones do flood the body, and so on. And courage is when moral agents act responsibly and well, and cowardice is when they do not, allowing instinct to overpower reason. I might not know whether I’d be a coward or a hero, but there is still a difference, although that moral claim might be a weak one if actions are less about agency and more about natural processes beyond my control.

Hood continues with some philosophy:

That “self” is a narrative that we hold about who we are. When we consider our self, we hold beliefs about what we would do in certain situations. However, the story we generate and the action we end up taking do not always match.

Much has been made in the commentary about the myth of the Victorian captain going down with the ship, whether maritime law demanded it or not (or whether many captains actually did this.) But as the old saying goes, “Waterloo was won on the fields of Eton”— the self may be a narrative, but in an older system the story was about piety, honor, obedience, and somehow the hormones were expected to obey the demands of duty. But if identity is a narrative told by a self in flux within a naturalistic system, it might be a little harder, as Percy thought, to know who you are, and no one else could know who you are or what to expect from you.

We struggle to know who we are or what we are for now that the old stories are disrobed. So much so that columnists for the Guardian find it necessary to deconstruct all this talk of cowardice, for the duty of a captain to take care of others is just a social construction, and not one in keeping with our nature anyway!

Charles Taylor suggests that one of the salient facts of modern identity is our self-conscious realization that our frameworks are not certain or necessary, and that lots of other people make sense of their lives in ways quite distinct from our own. Consequently, we’re often looking over our shoulders, not as clear-eyed and confident that our own way is right, wondering if their way is better. We’ve examined everything, and now we’re not sure who we ought to be.

It’s very tempting to fall into nostalgia or sentimentality in these situations. Very easy to long for a world which no longer exists, to attempt to revive ancient virtues now out of place, very easy to be suspicious of those self-examinations about the contingency and variability of our moral frameworks. That sort of traditionalism, however, verges on the irrational, and sometimes the reprehensible in its nostalgic defense of what can no longer be.

Traditionalists, and I’m in that camp at least on Tuesdays and Thursdays, really do need to accept the modern problematic and the modern questions — the looking over the shoulder — so as to avoid irrational traditionalism. Failing to do so renders tradition an arbitrary whim (a whimsical aesthetic, a lifestyle choice, as certain commentators criticize, and not without reason), rather than a reasonable choice. And yet, it is that very act of self-awareness which so often threatens the tradition, exposing it as less certain than was thought, and thus, maybe, optional. That kind of self-examination is not what the tradition is wont to do.

But reasonable traditions examine themselves anyway.

But I By Backward Steps Would Move