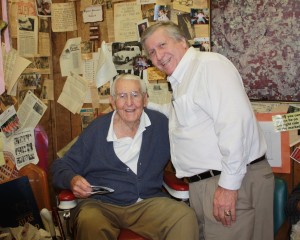 Down on the Square (as we East Texas natives refer to the downtown in Henderson, pop. 11,000), I make a visit to the backroom of the Strong-Hurt Pharmacy, site for many years of the Coffee Club, a place where mostly older gents congregate and opine with some privacy.

My 92-year old father has been a regular at the Club and held a kind of honorary position entitling him to perch in the barber’s chair (on the left in the photo from earlier days) until he became no longer able to “preside” a few months ago. Entering the backroom I pull up a chair and am introduced to Art Rousseau (on the right), a guy with whom I went to high school about forty-plus years ago. When I last saw him, he was a skinny kid carrying a saxophone in the band.

Today he’s a successful retired Dallas businessman who has, of all things, moved back to Henderson a few years ago, he tells me, for family reasons having to do with his custody of grandchildren and the problems of the Dallas public school system.

Art also relates that he’s working as a contractor with Gaylon and Cindi Rains, also local business people, to develop a vintage downtown building into apartments upstairs and a bistro on the ground floor. The latter will be another new restaurant on the Square, making three such establishments which have sprung up in the last five years. Since the great and nearby East Texas oilfield “played out” a generation or so ago, the regional economy pretty well played out also, thus making these more recent signs of a retail comeback all the more welcome.

Art’s passion is old buildings but this project was a pleasant surprise even to him: “We began by just taking the skin off the building and we found beautiful old columns. And lovely old ironwork, made by the Marshall (Texas) Ironworks that used to cast cannons for the Confederate Army. People started talking about this stuff and got excited.”

Art and his partners are not alone in their enthusiasm for bringing back a little dried-up East Texas oilfield town. Apparently a number of natives have been trickling back to launch projects with locals who never left. Noticing this boomlet of the last few years, Art made up a short powerpoint document outlining all the downtown development projects in the works and then met with the city manager to ask about future infrastructure. “At the end of my presentation I asked him, ‘So: ya’ll bout ready to add 73 commodes right in the middle of the Square?’”

From my youth I can remember Henderson folk worrying about things like the plot to impose fluoridation in the drinking water and Art says he still meets with a certain amount of “You can’t do that.” But not so much, especially now that the business community has realized their town has a few more assets than many of the other hamlets dying in the region.

Indeed one of its key assets is Art himself, of course, who, as the old Texas song says, seems never to have heard a discouraging word when it comes to dealing with local pushback.

Back in Valparaiso, Indiana, the leafy college town where we now reside, I realize that my friend Chris Mahlmann is also playing community sparkplug, just like Art. Chris left a high-powered financial career in Chicago to move an hour south to his wife Natalie’s Indiana hometown where he decided to launch ValpoLife, an online news publishing operation specializing in the local and the positive.

Underwriting the business himself with very little early revenue, Chris found that breaking into the local media community—even for someone offering free and positive coverage—was tough. “You can’t imagine what a battle it was to get people to agree to share their organizational and business news, press releases, whatever. People said to me, “You’re not from here. How could you know what life here is like? What’s your angle anyway?”

So he decided to make a point here. “We thought: let’s talk about all the good that’s being done by the faith communities in town. We did some research and came up with about fifty churches and temples. We sent out letters offering our coverage to all of them. We just said, ‘Hi, we’re ValpoLife, we’d like to publish your good news, events, activities, and so on.’ Zero response.”

So Mohammed went to the mountain: “Next we made fifty phone calls. Maybe three or four organizations responded. Some said they’re not online yet, some were suspicious of us, some said they’re just not ready.”

Finally, figuring sometimes it’s easier to ask for pardon rather than permission, Chris and his team decided to just post the community news and then tell the relevant groups about their coverage.

A significant change in local attitudes toward the project came year before last with ValpoLife’s “Business in the Backyard” event, a summer afternoon of free food, beer, massages, pingpong, and networking, held on the grounds of the ValpoLife offices, the only rule being no ties or dresses. “That seemed to break the ice and we got 150 or so people—businesspeople—to show up and have a good time—in person,” Chris reports.

The ValpoLife team persisted and they now have some 1,700 local news sources, all over the county, sending the website their items of (mostly) good news.

Given the state of Internet advertising—especially local ads—ValpoLife probably has an uphill battle as a startup. Then there’s the challenge of bringing a new kind of transparency to a small community whose school board members, to take one example, are not used to or necessarily desirous of much “sunshine.”

Although Governor Mitch Daniels recently stopped in the offices to do a video interview, ValpoLife is relentlessly non-political and non-partisan in its articles. “We are not the place to bitch about the new roundabout,” Chris explains.

Going beyond the immediately local, Chris has now expanded coverage in order to launch PortageLife and is working on NorthwestIndianaLife and LaPorteLife, with nearly 10,000 Facebook fans in tow. Which doesn’t mean it’s going to be simple.

“For a lot of city fathers, we represent a kind of Facebook effect—through our coverage we’re giving many more people in the community a voice,” observes Mr. Good News. “And if you’ve always had control of the information flow, that can be kinda terrifying.”

From the Village Square to the Global Village—and Back?