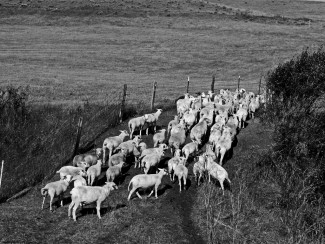 Louisville, Kentucky.  I was talking to sheep farmer and meat marketer Jim Mansfield the other day, about local meat and the challenges he faces trying to get more of his lamb in front of more potential customers.

Mr. Mansfield raises Katahdin hair-sheep in central Kentucky, and through his business Four Hills Farm he works directly with another two dozen farmers in Kentucky and neighboring states to sell their lamb to wholesale buyers. He is creating a market for regionally raised lamb in an area where for years all you could buy in the supermarket was lamb raised as far away as New Zealand.

The business challenge faced by small growers and the small companies that market their food is not generally quality. My state is dotted with good herdsmen who can raise lamb humanely and well on some of the rolling Kentucky hillsides that are much better suited to pasture than to row cropping. Like hemp, and like wine grapes, sheep are a traditional Kentucky crop that languished due to various factors, but they were once widely raised here because they are well suited to this part of the country.

The challenge is not supply, either. Mr. Mansfield says some of the farmers he works with would gladly increase the size of their herds, if the demand was there for the meat.

No: the main challenges remain 1) price, because with a smaller scale comes higher costs, and even though New Zealand lamb travels eight thousand miles to get to Kentucky, it is still cheaper, and 2) access to capital for investment. Mr. Mansfield would like to expand his business, but he is too big for “alternative” ag loans in this state, too “alternative” for traditional ag money, too small for a venture capitalist, and the banks don’t know how to assess the risk of what he is doing, because around here his model is still an unusual farming business.

But he mentioned a third challenge to me the other day, and I thought I’d mention it here, given that a certain number of our readers make an effort to buy local food. I’ll put it as a series of questions: are you buying local to save on energy use and shrink your carbon footprint? Or are you buying local in order to increase the network of food suppliers in your area, so that there is actually a local food economy, with local producers? Or both? What if one goal gets in the way of the other?

Let’s say we define “local” as within a hundred miles, as many do. What if a food marketer/farmer needs a bigger circle than one with a hundred-mile radius in order to get his business on a solid footing? How do you feel about regional food?

These days Mr. Mansfield has built a decent business supplying several Kentucky Whole Foods stores and some independent, higher-end groceries with his premium lamb, but he is stymied in his attempts to expand in this state because the really big players—such as the Kroger stores—won’t carry his product. Kroger did stock his meat for a while, Mr. Mansfield says, but dropped him when a much larger supplier (of internationally-raised lamb) was given a contract to supply all the Kroger stores, of which there are now 2400 in 31 states. Plenty of customers who could afford and who would be interested in Four Farms Lamb shop at Kroger, but if they want to buy Mansfield’s lamb, they have to shop somewhere else.

So Jim Mansfield is going further afield to find markets, only to discover that the “local foods” movement which has done so much to drive his business in Kentucky is proving a barrier elsewhere. There is a Columbus, Ohio, store which carries Four Farms Lamb, at least for now, but the owners there have told Mr. Mansfield they have some qualms about doing so, because by Ohio standards the meat isn’t local.

I must run with a careless crowd, because I was surprised at the desire for this degree of logistical purity.  But the argument is obviously worrying Mr. Mansfield, who is quick to point out that central Kentucky is a lot closer to Columbus than Auckland is. A good Columbus local food purist would avoid lamb altogether, of course, but in doing so his purity will undermine a different good.

Let’s say local food is our goal: well, local food, in either Ohio or Kentucky, outside of some CFO chicken, is going to be raised on what we all used to think of as a “farm” and which is now closer to an antique: a smaller-sized family-owned piece of land of somewhere between twenty-five and three hundred acres. This kind of an operation needs a market so that the farmers can earn enough cash to pay their mortgage, their taxes, and their health insurance. Without a market, we will lose those local farmers. Katahdin is an easy keeper, as sheep go, but lamb does not raise itself.

If we bypass the lamb that’s traveled twice our preferred distance, we may be purer in our actions in certain respects, but we are undermining our own regional food economy—and what is regional for us is local for our neighbors living a bit to our north or south. We are withholding our business from that network of suppliers who will build up a real local foods web in this Upper South/Lower Midwest region only if they can survive. As far as I am aware, the choice at the Columbus store is not between central-Ohio lamb and Kentucky lamb. It’s between Kentucky lamb or no lamb at all.

My own answer to what is, for some Buckeyes at least, a dilemma is that we all have what I could call a perfectly selfish interest in a local food economy that’s more flexible about whose food and how far, because with fewer farmers who can make a living farming, we will have fewer choices of local foods to eat. Not to mention the residual economic effect on all the little towns where farmers generally live.  I would say the deck is stacked against farmers enough as it is.

Every Jar a Victory