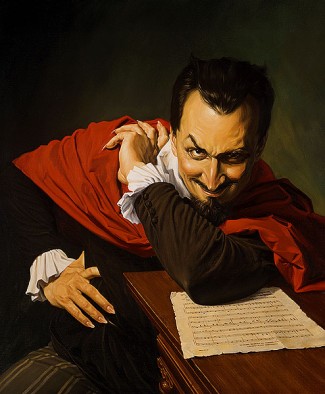 I write this letter to protest the public and wholly unwarranted attack on my character you have made during the course of your campaign, and which has only recently come to my attention. It seems that you have accused me of setting my sights on your country, of aiming to corrupt what you are pleased to call its “great institutions,” and to bring about the downfall of this, as you say, “good, decent, powerful, influential country.” I beg leave to inform you, Sir, that these accusations are without the least basis in fact, and anyone who considers the question fairly and candidly will see that you have slandered my good name (well, my name anyway) in the most disgraceful manner.

For one, all this fashionable impiety going about these days has left me and my minions rather disgusted with the whole world of men, and quite unwilling to lift our fingers anymore in the cause of earthly mischief. We cannot help feeling that all the vituperation directed of late at the Old Man upstairs falls on our heads indirectly, for certainly those who disdain belief in a god must, by implication, disdain belief in his great adversary. Where is the pleasure, then, in fomenting a bloody war or abetting the oppressive reign of some tyrant, as we were once so fond of doing, if we are to gain no plaudits for the deed. But what demoralizes us the most is to find that the greatest agitators of this modish skepticism – the so-called “New Atheists” – are, to a man, the most illiterate and cantankerous creatures imaginable. When ignorant men have become so unbelievably puffed up with pride and rancor, there is little left for a devil to accomplish. So, as I say, we have simply steered clear of your realm for many years now, occupying ourselves instead with the seduction of a species newly emerging on a planet just behind Alpha Centauri; they are growing four hand-like appendages, to your two, and thus promise to be capable of twice as much wickedness as you mortals.

I readily confess that my moral character has never been, shall we say, sterling, but I have always prided myself on this one point (well, what have I not prided myself on, but this one point especially) – that I have always exercised exquisite taste in my interventions in the affairs of your species. Say what you like about men like Faust and Don Juan, but they were men of breeding – gentleman, you might say – and I played no small part in their accomplishments. But now look at the behavior of your people – those “good, decent” people, as you have called them – and tell me if anything like good breeding or good taste appears in any one of their characteristic follies. What have I to do with all this base money-grubbing and consumerism, with which they waste their lives? What have I to do with the vile music, and even viler television shows, with which they abuse their dignity? Was it I who put an electronic gizmo into the hands of every last person, so that the entire populace walks around in a state akin to that of the undamned who wander endlessly beside the fair Acheron? Have I had the least bit to do with your debt and your debauchery? Was I ever once found in the company of a bank executive or a fraternity brother (they being generally one and the same creature)? These, Sir, are not the sins of a patrician (as I continue to regard myself, despite the straightened circumstances of the last several millennia), and I must say, I am quite frankly offended that you think I could be involved in such low, coarse trespasses, which clearly have much more of the bestial than the diabolical about them.

I understand, Sir, that your position as a candidate for office requires you to say certain things which fall somewhat short of the standard of veracity, and I am the last one in the universe to fault a man for fibbing, but I see no reason why I must be made the victim of your falsehoods. Of course, the nearest way to power in a democracy is to flatter and deceive the citizenry, extolling them as paragons of virtue, and casting the blame for whatever noticeable corruption persists in their society on some suitable scapegoat, so your speech was everything which ambition and megalomania could wish it. It was rhetoric worthy of a Cleon (a former client of mine, incidentally), the way you exonerated your entire audience from any responsibility for the decline of their country, and further, how you insinuated that in any contest between the righteous and the naughty, they – and you – were certainly, each and everyone, entirely on the side of the righteous. Still, I do not know why you had to implicate myself in your nation’s ills, rather than following the time-honored custom among your people, and shifting the blame for all these things on the adverse political party.

Consider your claim that I am to blame for the unmistakable decadence of your universities. I admit that I have hired several of your feminist professors over the years, having always found it convenient to keep a handful of witches in my employ, but as to the rest of that freak show of materialists and post-modernists, queer theorists and multiculturalists, I utterly disclaim any affiliation with these people, regarding them as a degenerate rabble which no self-respecting phantasm would associate with. Still, even I would not call these people the cause, so much as the effect, of your academic decadence. If you are looking for the culpable party in this matter, perhaps you might look to those “good, decent” folks whose votes you have been attempting to cozen, who invariably think of education solely as a means to affluence, who have imposed this base utilitarian conception on the entirety of your educational system (and not just the universities), and thus have rendered the need for any real academic standards superfluous and obsolete. So you see, Sir, there is no need to blame the devil for forms of corruption which are more than adequately accounted for by the greed and stupidity of the populace.

But what galls me the most about your accusations is the plain crudity of the scheme you have attributed to me, plotting the ruin of your nation, as you say, by “using those great vices of pride, vanity, and sensuality as the root to attack all of the strong plants that have so deeply rooted in the American tradition.” As if the one who authored the downfall of the entire human race – among his other notable achievements – could devise no more effective way to engineer your destruction than such an obvious ploy! I suppose you think I shall be appearing soon in Times Square, with pointy-tale, horns, and the whole bit, ushering the horrified masses at the point of my pitchfork down into the fiery pit of Gehenna. Allow me to inform you, Sir, that the devil is a good deal more clever than all that.

So suppose it really were my intention to plot the fall of America, what would be the sort of methods I would employ? I certainly would not do anything so prosaic as work through the evident vices of sensuality and pride; there would be no novelty, no panache, in such a proceeding. No, what I would do is utilize those traits regarded by your countrymen as the highest virtues, and make them serve my ends instead. So for instance, I would have your countrymen rebrand the vices of self-centeredness and avarice with a new name – I don’t know, something like “individualism” – and have them bend every last institution towards the promotion of this disguised sin, knowing, as I do, that no social institution can last long which does not pursue social purposes. Or I would so addle their minds until they came to define freedom – that most excellent blessing you mortals enjoy – as simply “doing whatever the hell I want;” that way, when they dump tons of pollutants into the environment or dress their little daughters like harlots, they may puff their chests out in the confident knowledge that they are exercising their rights as free-born citizens. And I would fan the ardent flames of patriotism in their breasts, until they were convinced, one and all, that love of one’s country means the uncritical, unquestioning, unreflective acquiescence to every one of its customary opinions or practices, at which point they will entertain a settled loathing for any member of their community with temerity enough to dwell on the gross defects in their culture, just as they will readily consent to bombing any foreign peoples unwise enough not to share their “values.” Once I had infatuated the people in this manner, there would be no need to attack your traditions, as you accuse me, for your traditions themselves would quite adequately serve my purposes.

And then, supposing by these methods, employed over the course of several generations, I had successfully beguiled the people into a state of universal and invincible self-love, what would be my next move, the coup de grace which would set the final seal on their destruction? You will say that I would place some incompetent fraud in the seat of the Presidency, like the present office-holder (who has certainly run things very much after my own heart’s desire). But again, this would be all too predictable. A far more delicious plot would be to raise some vulgar demagogue, one whose character was marked by the practice of a disreputable trade like lobbying or the law. I would infuse into his heart an insatiable lust for self-aggrandizement, and a willingness to say anything at all to realize it. I would set him on the campaign trail, praising the masses to the skies at every stop. I would have him wholly gloss over their manifest failings, like their inability to live without massive amounts of debt or their unwillingness to impart the least modicum of civility to their children, assuring them instead, at every opportunity, that they are a “good, decent” people, whose misfortunes can hardly be the consequence of their own poor character, but must rather be owing to the machinations of some nefarious figure – like the devil. By thus manipulating the people’s amour-propre, he would be certain to win the Oval Office; then, when the vices of the people had brought about various grave political crises (as they must), rather than encourage his citizens to acknowledge their own part in these evils – the only thing which could save them at this juncture – he would exacerbate their false sense of injured merit, directing their ire at certain factions, long enemies of his, who he will represent as the cause of these predicaments. In this way, he will set neighbor against neighbor, each one motivated by uncompromising self-righteousness, until, all across the land, the bloodiest violence and revenge became the ordinary occurrences of an afternoon. You see, Sir, how much more comprehensive such a scheme of destruction would prove.

I understand you mortals have a certain saying among yourselves, that none may search out the mind of God. Well, allow me to inform you, Sir, that the proverb holds no less true in my case also; none of you may search out the mind of the infernal one either. Therefore, I heartily recommend that, for the future, you abstain from accusing me of any more dark designs upon your nation, for by attempting to libel my reputation in this way, you know not whose name you may be implicating instead.

Our Slippery Slope into the Age of “Big Love”

Egalitarian Elites and the Academic Dilemma