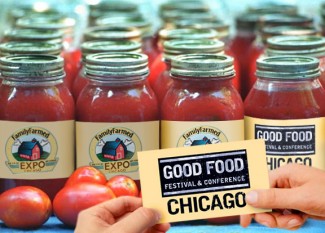 “If you’ve never worked a tradeshow booth,” a business pal once remarked to me, “you’re not a real American.” True dat. At the Good Food Festival and Conference in Chicago last week, the booths were full of real Americans, all of them happily engaged in restorative economics. Or at least chatting about the virtues of kombucha tea, hydroponics and similar crunchy-con topics.

Food, as you’ve probably noticed, is no longer just food. Some would argue it’s the interpretive key to the so-new-it’s-still-emerging politics, now that even the sturdiest suburban Republican housewives have watched the “Food, Inc.” documentary and awakened their inner Trotskyite. This tradeshow turned out, I’m guessing, something under a thousand organic farmers (horizontal and vertical, rural and urban), bakers, planters, processors, coop managers, gardeners, ranchers, food distributors, vintners, brewers, cheesemakers, permaculturists, and beekeepers, in addition to all the associated media types, bankers, and copy bands (more on that shortly).

While waiting for the evening’s Localicious dining experience (catered by local organic restaurants), I cruised the tradeshow and made my first stop at the Working Farms Capital booth, where I was slightly stunned to realize these guys were a kind of private equity firm. Not the Bain Capital sort, however. This is private equity in the New Economy fashion—i.e., Slow Money.

Steve Bianucci explained to me that the company’s mission is to buy, get certified organically, and then lease or sell farms to owners who can permanently retain them through multiple generations. Their larger properties range from 400 to 600 acres of prime Illinois farmland, which goes for about $4,000 or more an acre. Also part of their services is conservation farming with the goal of reestablishing a wild condition to acreage up and down the food chain (hawks and owls down to earthworms) in partnership with a mix of non-profits and governmental support.

Next booth I hit was that of Chicago’s off-the-grid vertical farm and food business incubator, The Plant. Here’s a description of the operation, lodged in an old red brick building in the Back of the Yard neighborhood:

From its beginnings as a 93,500 square foot meatpacking facility, The Plant is being repurposed into a net-zero energy vertical farm and food business operation. A complex and highly interrelated system, one-third of The Plant will hold aquaponic growing systems and the other two-thirds will incubate sustainable food businesses by offering low rent, low energy costs, and a licensed shared kitchen. The Plant will create 125 jobs in Chicago’s economically distressed Back of the Yards neighborhood – but, remarkably, these jobs will require no fossil fuel use. Instead, The Plant will eventually divert over 10,000 tons of food waste from landfills each year to meet all of its heat and power needs.

In the works at The Plant are several artisanal food businesses, including a brewery, a bakery, a mushroom farm, a kombucha brewery, and a shared kitchen. They’ve gotten lots of media coverage for this project, says Melanie Hoekstra, the operations manager, with guided tours going through now about three days per week. Their operations flow chart is one nifty graphic—don’t ask me to explain how it works.

I then spotted the booth of a fellow Hoosier, one Erick Smith, co-owner with his wife Jessica of This Old Farm, Inc., a produce distribution and marketing company specializing in getting local organic meats from Indiana farms to market. The young couple operates their business as a regional foods alliance. Erick’s engineering and business studies at Purdue are evident in his clean spreadsheets and nice marketing materials. Doubtless he could have earned much more at ConAgra or someplace similar but he chose to be another mad farmer (in Wendell Berry’s sense of the term).

From the department of good ideas, I saw the Davis CA-based Farmer Veteran Coalition. They match up vets looking for farm careers with farmers and landowners looking for employees, along with offering education and financial services. They sponsor retreats for new farmers and a conference for women vets in agriculture, all of it in pursuit of their mission “to mobilize vets to feed America.”

As I was taking all this in, Mike Hagler decided I looked like I needed a tradeshow freebie to stay interested. So he handed me a copy of his band’s (presumably perennial and recyclable) CD entitled “Synister Dane and the Kickapoo Disco Cosmonuts.”

Turns out these guys have a populist folk group with parody songs like “Everybody Must Get Cloned” (he figured I’m old enough to get the Bob Dylan pun), “The Monsanto Rag” (shades of Country Joe McDonald), and “Get Me, Roundup” (taking off on the Beach Boys’ “Help Me Rhonda”). The CD jacket includes a glossary for us urbanites who don’t know that Roundup is a farm chemical or that BSE is bovine spongiform encephalopathy.

I regret I was not able to attend what for me was possibly the most notable part of the event—the day-long Good Food Financing Conference, where I was looking forward to seeing the Dill Pickle Coop on a panel with the Farm Credit Administration and the Greater Englewood Urban Agriculture Task Force, all of them talking about the future of farming and local food. Next year, for sure.