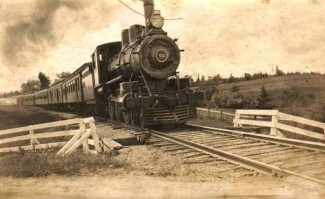 I was born in Natchitoches, Louisiana, a town known, if it is known at all, for four things:  it is the oldest city in the Louisiana Purchase Territory; the movie The Horse Soldiers was filmed there; the movie Steel Magnolias was filmed there; and an old tree at the end of a runway reached up and grabbed Jim Croce’s plane and killed him.

Though I was born in Natchitoches, I grew up in Pollock, located in the carpetbag parish of Grant. While the number of Pollockites is waning within the town limits, the real assault on Pollock comes against its once strong hinterland; for Pollock, like Athens, was more than the city itself. The Pollock of my youth was circumscribed by specific geographic features.  About ten miles north of the town proper flowed Fish Creek.  This was the northern march of Pollock, beyond which began the traditions, customs, and habits of a different commonwealth, Georgetown.  To the east about eight miles was Little River, a body of water which begins as Dugdemona Bayou, drains north-central Louisiana, and flows roughly southeastward.  At Georgetown, it meets Castor Creek and changes its name to Little River.  It courses its way into Catahoula Lake, then flows out of the lake in two forks: French Fork and Old River.  The forks merge to the west of Jonesville, and Little River eventually meets the Ouachita River and the Tensas River at a place called Trinity at Jonesville, where they all become the Black River.  (A Pollockite learns this with his mother’s milk).  Flagon Bayou begins at the southwest of Pollock near the old Louisiana and Arkansas Railroad and marks the southwestern and southern boundaries of greater Pollock.  It eventually flows into Catahoula Lake.  The bottoms of the Flagon are not unlike Tolkien’s Mirkwood. On a squirrel hunt in Upper Flagon Bottom, my father and I, on a dry October Saturday, killed three of Louisiana’s poisonous snakes within thirty minutes: a timber rattler, a water moccasin and a coral snake We left without a squirrel. To the west about six miles was the dry prong of Big Creek, the Louisiana and Arkansas Railroad, and U.S. 167.  At the western end of the dry prong of Big Creek lies Dry Prong.  If Pollock is Athens, then Dry Prong is Sparta.  We were bitter rivals in all matters: sports, academics, and girls.

Flowing through the Commonwealth of Pollock are five creeks: Big Creek, Clear Creek, Sandy Creek, Mill Creek, and Dyson Creek.  In addition, there are at least two branches: Sugar Branch and Carson’s Branch. The town itself is bounded on the north by Big Creek and on the south by Sandy Creek.  Sugar Branch separates extreme northern Pollock from the rest of the town.  Cutting around the eastern and southern edges of the town is the railroad now called the Union Pacific.  For nearly one hundred years, it had been the Missouri Pacific.  It had originally been built by the neo-carpetbagger Jay Gould, who called it the Iron Mountain Railroad.  Most of my boyhood was spent on the creeks and the railroad.  In those venues I was never alone; there was all through my formative nineteen years a cadre of loyal friends, boys all, who fished, who hunted, who hiked, who explored and who sometimes fought with one another up and down the banks, in the creeks and along the rails.

Public schools, even in a carpetbag parish, had not, in those days, been turned into state schools by U.S. Supreme Court decree. Our teachers were not agents of the state against whom we had a constitutionally sanctioned adversarial relationship.  They were members of our commonwealth, our community, who had authority over us.  They were in every respect in loco parentis.  They were not only our school teachers.  They were our Sunday school teachers, our scout leaders, and friends of our parents.  Teaching was still a vocation, with all of the implications thereof.  Several of my teachers remained single until they retired.  My mother, herself a teacher prior to having been smitten by my father, lived for seven years in the same hotel room and for seven years took her meals with colleagues at the same hotel dining table.  When she moved down the Little River from Rochelle to Pollock she boarded with a distant cousin until she married my father.

Life in the Commonwealth of Pollock thrived around family, the school, and the churches.  Most folks in the piney wood uplands, the oak ridges and the tupelo bottoms were Baptist, Southern of course.  Next came the Methodists.  At first there were the Methodist Episcopal and the Methodist Protestant:  the MEs and the MPs.  Then they unified and became the United Methodist.  My father always held that, in Pollock, the Stewarts controlled the one and the Walkers controlled the other.  In response to one of my queries, my father attempted to explain the difference between the denominations.  He said that Methodists were Baptists who had learned to read and that Episcopalians were Methodists who had made money.  Catholics were folks who had a lot of kids and who openly drank beer; they sometimes fished on Sunday.  Papa said all of this with a twinkle in his eye; but his humor, often quite earthy, seems to have coated something of essence.  Actually my best friend and Papa’s best friend were Catholics.  It was whispered around the commonwealth that we were secret Papists.  There is some truth to that; therein am I much like our Confederate President Jefferson Davis.

When I graduated from high school and went off to college, a mere fifteen miles away, I did not leave Pollock; however, when I turned nineteen, I boarded an airplane for the first time in my life and flew to Europe.  I, along with many in my generation, contributed to the decline of Pollock. We left and did not return—the first generation to do that en masse.  Federal Judge Norman Scott closed three high schools in the parish and ordered that a consolidated school be built in a sage patch equally distant from each community: Colfax, Dry Prong, and Pollock.  In one fiat act, a federal judge destroyed Athens and Sparta.  The final and most deadly assault on the Commonwealth of Pollock has been the encroachment of suburbia from the south on its hinterland; the spread of Alexandria and Pineville is inexorably subsuming the outlying strongholds of Pollock. Yet Pollock still has voices willing to speak on its behalf and acknowledge in story its beauty and grace, its funny times and tragic moments, and its people with their flaws and with their virtues.