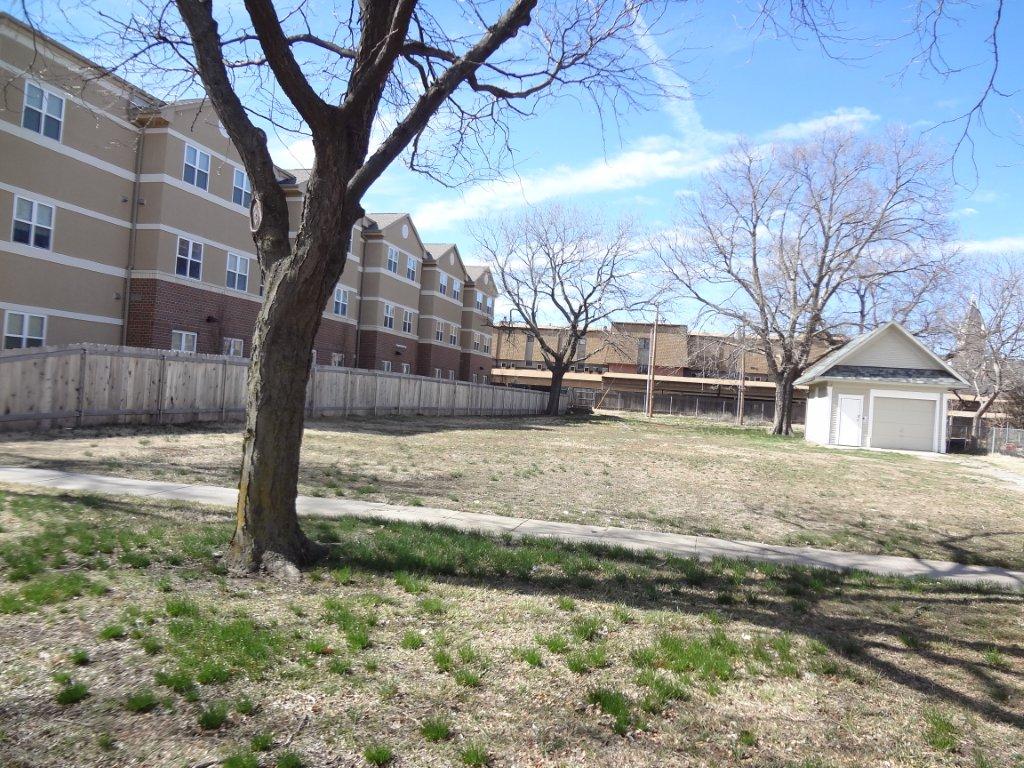 This academic year Friends University found itself wondering what to do with a plot of land, directly beside and behind some student dormitories. Through a fortuitous combination of variables (the discovery of some left-over money in an otherwise cash-strapped university, the arrival of new university president and spouse who are fans of gardening and Wendell Berry, and some hard work by various students and faculty to get the Friends community to start thinking more about recycling, sustainability, and local economy), we are now embarked on the project of slowly, bit by bit, creating a community garden. And I seem to be the one in charge. Lucky me! Not that I don’t have our own family garden to care for. (Just put our tomatoes, peppers, string beans, and cucumbers in on Saturday.)

This week, I’m occupied with finding out just which student, staff, and faculty individuals and groups are committed to maintaining a garden plot over the summer months. There’s no money for a full-time gardener, so this is going to be run solely on a volunteer basis, and it was decided at an earlier meeting that, at this point, the best way to get the garden going would be to appeal to entrepreneurial opportunities and individual stewardships; to use the land as a space where anyone here at Friends interested in raising some tomatoes, onions, lettuce, herbs, or anything else could set up some rain gutters or raised beds or just put stuff directly in the ground and take ownership what whatever they raise, to eat or sell at one of our local Wichita farmers markets or donate to The Lord’s Diner or another local homeless shelter, or just give it away (give it back, in a sense) to the Friends community. We’ve got some big hopes for this garden: that perhaps we’ll find a way to integrate what we’re doing with the Delano neighborhood (where the university is located) and their already thriving community garden; that we’ll be able to get more classes involved, with students seeing tending the garden as an opportunity to further their own studies in plant biology or health science or social work; that maybe someday Friends own garden will be supplier–perhaps even the primary supplier–of our university’s cafeteria. But for now, I have to get those volunteers, and find some time to get us together with the soil and the basic supplies. There’s already been some sharp discussions over how “green” we want the garden to be (imagine: professional groundskeepers and interested-but-inexperienced students and faculty activists may all see things differently!), and I’m sure there will be a lot more negotiating to come. But getting something in the ground is the first step, and a baby-step at that. 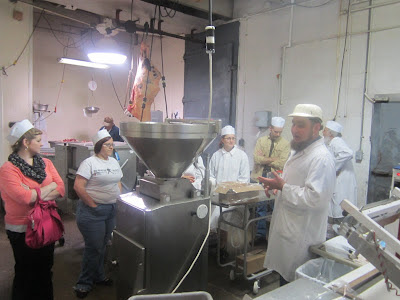 Moving into a more local, more sustainable, more simple way of living and spending one’s time is always a matter of baby-steps, or so it seems to me. For the third time, I’ve recently taken a group of students out to meet with some local Amish and Mennonite farmers and meatpackers, and like the previous two trips, it’s an eye-opening experience to be confronted with people who have embraced a level of intentionality towards, and collective responsibility for, the practical necessities of their lives which is mostly absent from the environments of your typical American university student. We spent a while at Yoder Meats, where Kenneth (the bearded gent on the right) explained to us at length about what they do with the cattle, hogs, and other game which they slaughter, and about all their efforts to stay on the good side of state and federal inspectors and keep their “Hazard Analysis and Critical Control Point” forms up to date. He made no bones about what a pain it all often is, but neither did he criticize the system; it’s all a necessary part of enabling his customers to be able to eat the meat they procure themselves, or at least be able to be secure in the “point-of-origin” knowledge which locally processed and packaged meat can provide. He didn’t even weigh in on the great “pink slime”debate of recent months; to him, the question wasn’t at all what part of an animal one eats, but simply whether one can say with confidence where it came from and what happened to it on it’s way to your stomach. 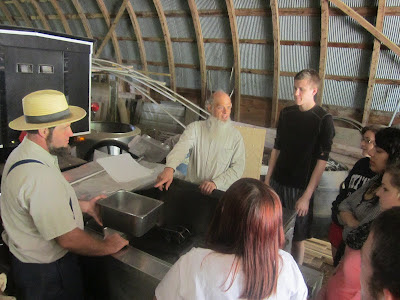 Over at Glass Springs Dairy, we similarly saw lots of baby-steps, lots of struggling to make this practice or that one both a practical success as well. Jacob (the fellow with the hat on the left) has been working to expand his Jersey herd, but he wants to keep them all grass-fed too, and so that means questions about access to pasture land and feeding them during the winter months. He has a thriving business in raw milk, and can wax eloquently (and at length!) about what he sees as the myths of pasteurization and the various restrictions which Kansas dairies operate under in comparison to other states. But he also wants to diversify, moving into cheese and other dairy products, as well as setting up a rotational grazing system with his cows, so he can expand his chicken operation and get more out his current land holdings. More questions about what he can sell, and to who, and for how much, and under what conditions: Jacob, like Kenneth, like us here at Friends, are part of an ongoing effort to figure out how to make something counter-cultural truly work, to contribute to our own lives and those around us, all while satisfying our practical needs (or at least as many as possible).

I see more and more of this, all around me, and it is simultaneously hopeful and frustrating. Hopeful because more and more people are recognizing the need to free themselves from those systems which supposedly were going to make things (what they eat, how they traveled, who they vote for, etc.) so clear and clean and easy; what they’ve done instead is debilitate us, make us weak and unhealthy and unpracticed in the arts of living and government, desperate for good economic news to be handed down to us and unwilling to interrogate those who benefit from these unequal, environmentally destructive distributions of wealth and work, privilege and power. But also frustrating, because the appeal of those systems–specialize, individualize, streamline, outsource!–remains huge, especially in a world where technology (falsely) promises us all the entertainment and insight we can handle, assuming we can find the time (and the money to upgrade all our smart phones to 4G), and thus almost all of us (save only the Wendell Berrys and other similar sustainability saints we have in this world) are similarly engaged in tentative, experimental baby-steps, just half-steps, compromises which often conflict and crash into one another. Not a reason not to keep trying of course, but it’s sobering all the same.

This semester I was invited to speak a couple of times at a local private academy, a somewhat ramshackle school operating out of a warehouse, but one which showed tremendous devotion to educating their students in both religion and the practical arts; their motto of “Tradition–Community–Joy” summarized it all. They had me (and my reliable local food tour guide, Leroy Hershberger) talk in our different ways about stories, attachment, and how knowledge is passed on from one person to another in a community. They’re taking their baby-steps too, I think–and doing well at it. (One of their graduates is now a Friends student who went on this most recent local food tour with us, and the questions she asked were engaged and intelligent to an impressive degree.) With all of these baby-steps, maybe some of will get through this times of transition yet.