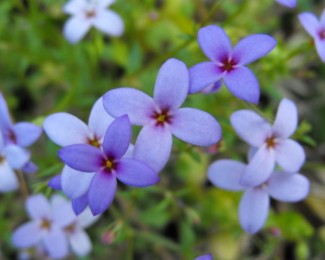 On a gorgeous April Wednesday I am filling in as substitute homeschool teacher. We do arithmetic; we do a language lesson about adverbs and Emily Dickinson. Then—did I mention the day is gorgeous? That the air through the window is crisp and fills the lungs with hope and delight? That the cardinals are courting round the bay tree and a wren is chirping from the buckthorn? That the sky is blue, the dandelions gold, the violets… er, violet? All this is so, and the substitute teacher, less inspired by whatever lies in the plan book before him than by the season swiftly unfolding outside the window, calls an audible.

Daughter cheers. I call it a wildflower hike, to make it sound more schoolish. We shall take notebooks and colored pencils and hunt along the river for wildflowers, and sit in the grass and draw them. We shall go where the wind carries us, so long as it carries us in a mile-and-a-half loop around  Pea Creek Trail. Shouldn’t education be opportunistic, anyway? Need the vagaries of life and weather bow before the Almighty Curriculum? They need not, I say, and on this day I am teacher and principal, judge and jury. Off we go.

We draw spring beauties, we draw rue anemones. We note the shapes of their petals and the patterns of their leaves. We draw another sort of flower in meticulous detail in hope of identifying it later from the wildflower guide I forgot to bring along. We watch the turtles sun themselves on fallen logs. And then, after falling silent awhile, Daughter announces that she has composed a poem about the bluets. “Would you like to hear it?”

Of course I would like to hear it. She recites a half-dozen lines, lovely and heartfelt, then trails off, backtracks, repeats a line as if trying to remember it.

“Would you like to stop and write it down, so you don’t forget it?”

She would, and so we find a dry patch of ground by the water’s edge and draw our notebooks once more from the backpack. In solidarity I toil at some dreadful bit of verse which, if the literary world is truly lucky, I will never finish. Happily, I am soon interrupted.

“Should I say ‘on the riverbank’ or ‘on the bank of the river’?”

Now, this is a serious question. Poetry is supposed to be a personal matter, Calliope’s adherents be damned, and children are supposed to be encouraged to express themselves uncritically, lest we damage their fragile self-esteem. But she has asked it thoughtfully, not from weakness but as one writer to another: it is a serious question, a grown-up question, and it deserves a serious, grown-up answer, not a pat on the head. But how to respond? “Riverbank” has an economy that suits the practical, the utilitarian, the tweeter and the blogger. I once had a teacher, moreover, who decried the double prepositional phrase, and I have never succeeded in reasoning myself out of his pet peeve. But we are writing poetry, and I have never suffered utilitarianism gladly. This is a question about language, not propriety. And poetry is a personal matter. To sincerely and openly be asked advice on a piece of writing is a thrilling thing, but also a humbling one.

“Can you read me the whole line?”

“The second one,” I say without hesitation, and then scramble for analysis to justify my response. “‘The bank of the river’ fits the rhythm of the line. Riverbank ends on a hard sound that makes me think the line is over. It feels like a hiccup before the line goes on. But,” I add, “it’s your poem. You have to decide how you feel about it.”

She thinks the matter over. “I agree,” and she writes the phrase in her notebook. “I like ‘bank of the river’ better too.” Then her eyes move over it again, and she asks, “Should I say ‘standing joyful’ or ‘standing joyfully’?”

“I’m describing the bluets themselves,” she says firmly, reaching for her colored pencils to illustrate the poem.

In the moment, sitting thoughtful on the bank of the river in the morning, nothing about this conversation strikes me as unusual. Daughter knows if she asks me a serious question I will give her a serious answer, and I am always happy to be asked my opinion on just about anything. Nor do I find it odd that anyone, even a child, would be spontaneously moved to poetry: isn’t everybody? (Even if only to a dirty limerick?)

In retrospect, though, that conversation is what I recall of the day, at once its teachable moment and the proof of an education’s value.

To see bluets amid the grass and weeds takes imagination: the ability not to tailor new worlds out of whole cloth but to see what is present but partially hidden, a simpler and more difficult skill, and how do you foster that? You wander. You fool around. You daydream. You waste time. You look down. You wonder. You ask questions that have no answers, or that have too many.

But then how do we think about those humble flowers? Not what do we think about them, but how? We need models, and models demand study. Not scientific models, God help us: until embarrassingly recently I could name the parts of a flower but not the flowers in my front yard. A scientific model from a textbook is an established fact, not an invitation to think. We don’t want to think about any flower, in any case, not the abstract, Platonic flower, but about the real, personal, individual flower before us. We’re using intuition now, building personal knowledge. And for that we need poetry, and learning poetic models means memorizing poems. Wordsworth’s old chestnut about the daffodils, learned by heart months earlier, gave her a vision of flowers anthropomorphized (tossing their heads in sprightly dance). She’d been learning Emily Dickinson’s “A Slash of Blue” just that morning, and from that she learned ways of thinking metaphorically about colors. Merely reading the poems doesn’t help, any more than skimming a diagram of a flower would; you have to learn them.

How, finally, do you communicate what you’ve seen and thought to others? Then the serious questions have to be asked. To communicate takes language, and language demands structure. Now we must descend from airy fancy into the unforgiving rigor of grammar. We need adverbs and adjectives, gerunds and — all right, we’ll get to gerunds later. But we need those pieces and parts, and to recognize them when we see them the way we recognize a bluet or a spring beauty, and to have names for them so that we can discuss them, analyze them, work to make our writing efficient, elegant, even lovely rather than merely functional. And so we diagram sentences, much though progressive educators shudder at the thought, much though the masses cower under their graphic novels. We need the hard rock of solid common ground under our feet, and there’s no way to get it but to hew it and heft it piece by piece.

Behind this footloose spring day, beneath this careless dismissal of formal curriculum, is piled a lot of old-fashioned rigor. But we’re not thinking of any of that, not while we sit thoughtful on the bank of the sun-spritzed river in the morning. It is, after all, a footloose spring day, in which education is not intended, designed, planned, but merely happens. What, then, to take from this day?

Homeschoolers make two common and opposite criticisms of the public schools. The classicists argue that the public schools lack rigor, while the unschoolers insist that formal curricula are too rigid and that children must be permitted to find their own path. Both are, in their own way, right, but neither is sufficient: children need grammar and logic and rhetoric, but they will have to discover on their own what to apply it to. They need the rigor of the classical education to use wisely the freedom of the unschooler, and the freedom of the unschooler to give a classical education purpose. They need the airy liberty of woods-wandering and the rocky foundation of grammar, the carelessness to stumble upon what they ought to be careful about. They need a tough curriculum and the will to tell it, on a gorgeous April Wednesday, to go take a hike. That’s how you have a conversation about bluets and adverbs; that’s how you learn, how you live.

And beyond education? We need order, but order is not an end in itself. To make order an end in itself is to make it an idol, and idols distract us from what is truly worthy of our attention. The public schools make an idol of curriculum; government and industry make an idol of organization and planning; the result is that we have neither the solid ground of grammar, good bridges, and sturdy homes nor the time and space to use them well.

And, finally, this: if you can’t have a simple, honest conversation between two people who care about a thing, none of the rest matters.