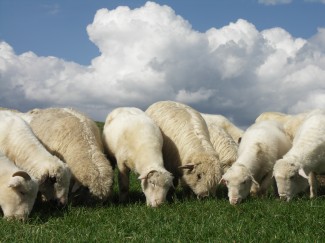 These are good days for those residing in old homes with wide front porches and easy access to quaint Main Street shopping. After all, trends in urban design seem to have recently and definitively declared mixed-use, square-block living the winner over suburbanism; charming downtown  shops tend to stay solvent for as long as a year now; and the Restoration Hardware catalogue on my kitchen  counter  has an astonishing number of ideas for how to dress up a wood-burning stove. The days are less good, though, for those residing in homes who are also determined to house several dozen goats and sheep in their front parlors.

Growth and development beget eccentricity in the South. Otherwise compliant citizens, happy to go about their work minding their own business, polishing on the weekends the Civil War cannon they keep in the shed and feeding the odd backyard goat, are driven to extremes when the road gets widened and company  comes to stay. It’s then that the Civil War cannon gets dragged out of the shed and onto the front lawn just to piss off the new neighbors and one goat becomes four goats–or, in the case of my neighbor,  one goat becomes forty goats. I never minded. But, to be fair to those who did, I lived a block or two upwind from him and only got a whiff of his livestock on the hottest, most stagnant of August afternoons, or when walking my dog through the cemetery that bordered his property.

When their eccentricity is of the proper kind, these men and women become local celebrities and the darlings of small-town newspapers. The old man who builds strange folk-art statues with scrap metal and a welding torch off of Piney Grove-Wilbon Road, for instance, receives regular pats on the head from Northerners who had always imagined the South to be populated exactly by this sort of gentle outsider. And even the guy with the Civil War cannon in the front yard was eventually domesticated by the town and given a sort of honorary exemption from local land-use laws prohibiting antique artillery demonstrations on Federal holidays. This sort of behavior was, in a way, what newcomers fleeing the turnpikes of the Northeast had paid for. That, and weather suited for year-round golfing.

But my neighbor with the sheep and the goats never quite reached that status. Things were just too strange over there: the women’s stockings that hung from tree branches, the tarpaulin Hoover-ville in the backyard, the giant mound of saw-dust that gave his animals a privileged view of the bordering cemetery’s visiting mourners and, of course, the effluvium of sheep dung that  hung suspended in the air. In the end, it was all just too much. The police came, the local news station vans followed, the house was condemned, the creepy stockings were taken off the trees, and over half the livestock had to be put down for malnutrition. The town was in agreement: oddity in the face of social change was fine–even encouraged, a strong stench in August in the name of robust property rights was tolerable, but animal neglect goes too far. And in that, I can say, we were all in agreement.

Not long after, I moved my family one town closer to my work, off of our rented house with the wide front porch and north ten miles up the same interstate that the TV news vans drive down when something weird happens in the country. The town to which we moved was a place populated entirely, according to the legend of the smaller and poorer town we had just left, with Hackensac ex-patriots and hand-wringing land-use restrictors. There, you can’t bury a dog in your own back yard without a permit and only the rich can afford to live downtown where the front porches are wide, leaving the rest of us to bury our dogs in secret and hack the good-life out of whatever peculiar neighborhood fate has deposited us, urban designers be damned. In protest, I bought an old bicycle and began smoking a pipe.

It was around this time that whatever strange, Orphic tune is presently compelling untold numbers of discontented suburbanites to begin raising chickens settled on our home, as well, and I began to think back to my old neighbor with the goats. Did it begin like this with him, too? Did my old neighbor also sense with dissatisfaction the way in which we spend our working lives operating fork-lifts and programming computers, participating in a single, endlessly repeatable, moment in the creation or transmission of the commodities that fill our lives? Did he, too, begin his mornings inexplicably holding store-bought eggs up to the light of his kitchen lamp, squinting like a sommelier, hoping to find some flaw in the unassuming egg on which to hang the sin of a half-century-long estrangement from the family hen­ house? The untold features of various poultry breeds became, in other words, not simply a heretofore under-appreciated part of life, but a kind of talisman for a new way of looking at life generally, one that finds joy in the whole successive string of moments that comprise the story behind the stuff of life.

Chicken-keeping, like any number of hack-to-basics field-crafts, holds out the promise of seeing both the origin and conclusion of a thing, even if that thing is as simple as an egg. We spend our days among the half-lives of objects, participating in only a chapter or two of a given narrative. But with a fertile hen in the back yard or a few dozen goats in the kitchen, why, all of life from birth to death might be captured and admired before the breakfast plates are cleared.

But to wander into the suburban chicken movement these days is a little like sneaking down to the river for a secret baptism only to discover, upon your arrival, that half the town is already there, busy humming their hymns, donning white gowns and getting baptized themselves. We were, in other words, hardly alone in our conversion zealotry, and a bit late to the party, besides.

Added to this insult was the shocking discovery that our new town forbade, not only burying dead dogs and selling homes with wide front porches to the working classes, but keeping live chickens as well. We were, at least in the collective mind of the town council, no different or better than those who forget to feed the flocks of goats kept in their living rooms. “We’re different!” the local chicken petitioners explained to the town council.  “The only chicken I care to see in this town is the one on my plate,” was their collective, and, in the case of one councilman, literal response. Fittingly, the gods of irony impeded my sad drive home from the town council meeting with some twenty odd geese crossing the street near my house. The fickle and malevolent councilman’s determination  to carry a brief for a flock of geese that brought neither joy nor eggs, but merely a daily quotient of feces to my neighborhood, while refusing to allow me to quietly keep a couple of hens named, probably, Gertrude and Alice, in my back-yard was an affront to decency and common sense. South American revolutions, I was sure, had been ignited over slighter injustices than this.

My town’s ordinances don’t really have recognizable legal categories for gentleman farmers, avant­ gardeners, and organic counter-culturalists. To them, the world is divided up into those who cut their lawns and otherwise behave themselves and those who don’t. And it is those who cut their lawns (or hire others to cut it for them) who invariably need protection from those who don’t. The thought that someone might both cut his lawn and keep hens named, again, probably, Gertrude and Alice in his back yard is an attack on everything that modern ordinancing stands for, akin to proclaiming that a man ought to be able to keep a sheepfold in his front parlor.

Which leads me to my real point: a man ought to be able to keep a sheepfold in his front parlor.

I don’t know what my neighbor’s intentions were. Rumors of vast, tax-sheltered wealth and a mansion hidden in the woods near the county line circulated at the time the dilapidated town-house was finally condemned. For unknown reasons, the story went, the old man had chosen to upend the typical uses of the country-house and the town-house, and decided to keep his livestock just off of Main Street and live in tidy comfort himself out in the woods.

But as I examine my store-bought eggs by 40 watt light and draft in the margins of my notebook ever­ more elaborate hen houses that remain un-built, my neighbor’s living arrangements begin, not only to lose their mystery, but to resemble something like salvation for the town that turned on him.

I don’t know much about my old neighbor—a man who, if accounts of his second home  in the woods are correct, wasn’t technically my neighbor but, merely, the owner of a flock of goats who were my neighbors—but my hunch is that he wanted more than survival for the town. For him, the past and, indeed, life at its very core smells closer to goat feces than it does to the artisan soaps they sell in the shops down the street from him. His livestock  was a reminder to anyone who stood downwind of him that life was rotten to its core, and history a thing to be chewed in cud, a reminder of something that long ago would have been called sin. There they stood, as close to akimbo as goats can, on a pile of saw dust in the back yard overlooking the graves of several hundred former residences of the town.  ”This is the way of all flesh,” cemeteries explain. ”This is how it smells on the road leading there,” the goats reply.

A town can’t ever truly be healthy if its only method of survival is to pretend that decay doesn’t exist or if it pushes evidences of decay onto other towns and other neighborhoods. This is the way of recent towns and retirement communities. But a proper town, one that undertakes to assume in the sweep of its operations the whole of human life, from egg to decay, must make some formal reckoning  with the heterodox within it that is more eloquent than simply canonizing into law the preferences of its most  preening citizens.  A healthy town invites those who inhabit it to live as fully and completely upon their plot of land as their ingenuity and industry will allow them.  In the malnutrition of his livestock, it was shown, I suppose, that my neighbor’s industry ultimately failed him. But his aim, at least from my perspective one town and a score more of land-use restrictions over, was spot on.