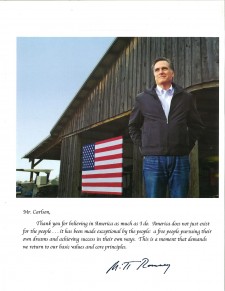 I received my official photo of Mitt Romney in the mail today. It came from the Republican National Committee. It shows Governor Romney standing before an unpainted barn, an American flag hanging to the photo’s  left. Animal stalls appear to be in the background. A small tractor is nearby. And there, off in the distance….is that a log cabin?

The Candidate himself is wearing blue jeans—the apparel of the working man—with a simple grey work jacket. His hair is slightly ruffled, as one would expect from a man used to hard, outdoor labor. The only discordant note is a white shirt somewhat too crisp and clean for its setting.

I suppose we should despair over the distortions of background and character found in photos like this. I prefer to see this one as a sign of hope. After all, the largest and greatest team of publicists that money can buy has clearly determined that Mr. Romney should NOT be seen in his normal clothes—the grey three-piece suit—or in his natural habitat (mansion or skyscraper). Instead, staying true to political conventions reaching back to the early Republic, he MUST be seen as an Agrarian, a man of the soil, one who works with his hands, one who knows the ways of nature and Nature’s God.

We can be sure that this photo was vetted before a multitude of focus groups; the man fixed in this photo is the human type that a majority of Americans want as their President. As the caption says, “This is a moment that demands we return to our basic values and core principles.” The clear implication is that, at some deep level, those values and yearnings remain Agrarian.