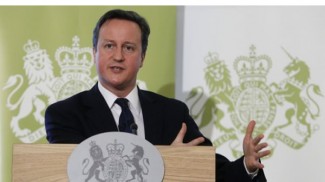 The place is Great Britain; the year is 2011. Years of economic downturn have brought the unsustainability of government-funded social services to a crisis point. Prime Minister David Cameron re-launches his “Big Society” platform (several times) calling for a greater role for local governments, non-profit and social enterprises, and community volunteers, and is charged (many times) with peddling a feel-good distraction from government program cuts.

Programs the public has taken for granted will be discontinued, benefits and welfare programs will tighten their qualifications or dry up altogether.  One big story is the threat of youth center closures: after weeks of summer rioting in London, Bristol and elsewhere, Britons are feeling touchy about the youth issue.  Across the country journalists and pundits sound the alarm of disaster.

Fast forward one year.  The threatened cuts have come to pass, government youth centers have closed, many unemployed are losing government benefits.  But something else has happened.

On July 13, BBC correspondent Mark Easton shares the surprising results of his survey of youth club closures:  “I found 60 different communities in which services have been saved, and many more where active campaigns have been launched, often with the enthusiastic backing of young people themselves.”  Closinggovernment youth centers may not actually mean the end of youth services at all.

A few days later The Guardian’s Amelia Gentleman explores the growing number of food banks in a country hard-hit by the economic country.  As the government cuts benefits that have been helping the unemployed purchase food, private organizations – and especially churches – are stepping in to fill the gap.  “Until 18 months ago there were no food banks in Coventry; now there are 11 across the city,” she explains and goes on to add, “The largest network of food banks in the UK, the Trussell Trust, a Christian charity, has doubled the number of people it feeds over the past year and reports that three new food banks are opening every week.”

The economic situation is bleak, but Britons are showing that, in contrast to what Alexis deTocqueville described in the 19th Century, they are no longer reliant on government or great lords.  Like the Americans Tocqueville observed, modern Britons have “conceived a sentiment or an idea they want to produce in the world, they seek each other out; and when they have found each other, they unite.”

Such stories seem like they would be the silver lining on a cloudy economy.  But that doesn’t seem to be the response from some quarters of the Kingdom. The commentary from both journalists and politicians has ranged in tone from mildly (one could say skeptically) optimistic to outright scathing.

Easton notes that, in some ways, community-run youth centers may have an advantage over government-run programs in their flexibility: “It is likely they will be more reflective of the demands of local teenagers, and there are potentially big gains in terms of social capital.” Still, he calls the fact that government cuts may actually inspire active citizenry “perverse” and questions whether these solutions are sustainable (an open question, granted, but it seems we do, at least, know the government programs are not).

But if Easton offers only mild enthusiasm about youth programs, much of the response to the news about food banks is downright vitriolic.  Gentleman quotes Labour MP Kate Green’s opinion of food banks, “I feel a real burning anger about them . . . People are very distressed at having to ask for food; it’s humiliating and distressing.”

Now, understandably, the need for food banks is evidence of poverty and unemployment, and for that reason is troubling.  But the interesting thing in the responses Gentleman describes is that the outrage is not directed at the situation, but at “Big Society’s” response.

To the opponents of these civic efforts, the primary problem is not that people are unemployed, or even that they are hungry, but that they are being cared for by community members and nonprofits rather than by the government.  Gentleman raises many of the familiar concerns that come up anytime a “private” group takes over something that has been handled by the government: potential lack of neutrality, uncertainty and inconsistency from group to group, the discomfort people may feel with the religious nature of many groups that are stepping in.  But these are noted almost in passing.

Gentleman’s primary criticism is reserved for the effect of food banks on those who receive their aid, “It becomes charity rather than basic state support, and for many this brings a degree of unease” (emphasis added).  The word choice is significant. “Basic state support” suggests something that is more than help in desperate times, something expected, something that can legitimately be depended upon.

This becomes clear when Gentleman quotes shadow (Labour) work and pensions secretary Stephen Timms, who is concerned about what happens “when people are dependent on these charitable handouts.  My worry is that we are just at the start of cutting back the benefits system and already a large number of people are not able to buy food for their families.”

Timms’ concern about “dependence” on charity sounds, at first, similar to the concerns voiced by many American Conservatives about welfare created dependency.  But the second half of his statement shows that, for Timms, the fear is not that people are not self-reliant – that question is not even addressed – but rather that they must rely on something besides the state.

The turns across the pond remind me of a recent article by Ted McAllister on Liberty and Community After Progressivism. McAllister described the Progressive project as built of “the person made fit for incorporation into a set of abstract relationships, an individual whose moral architecture is general, abstract, and tautological.”  He later notes that this project includes “fostering many forms of dependency so that, in some manner, citizens are akin to subjects or clients of the state.”  Such a vision involves citizens who are “liberated” from local ties – independent of the more particular relationships around them.  Relying on the state thus offers freedom from depending on other groups or individuals.

Shadow environment minister Mary Creagh reflects this view when she tells Gentleman “There’s something about feeling that you are asking for charity rather than getting something from the state. . . it’s humiliating; it involves swallowing your dignity . . .”

The state, like the moral character the Progressives tried to create, is “general” and “abstract.”  State resources are filtered through the bureaucracy until their source is truly anonymous and they are distributed and used more or less anonymously.

But while charity can and has been abused or exploited for the sake of power, it is worth remembering our Old King James Bible, “And now abideth faith, hope, charity, these three, but the greatest of these is charity.”  The word “charity” originated as a synonym for love, and, it would seem, that sense of concern and love for community is what continues to drive the growth of food banks in Britain today.

For all her criticisms, Gentleman notes that “Volunteers have a much more straightforward attitude.  They say they are simply responding to a rise in demand.”

In this sense, food-bank growth is driven very much by the same spirit that is driving community members, even young community members, to raise funds and offer time to keep youth centers open.  Concerned members of a community see a need that must be met.  And the public – not the state – are discovering that they have the ability to work together to meet those needs.

Ashley Trim is Research Coordinator for the Davenport Institute for Public Engagement and Civic Leadership at Pepperdine University.