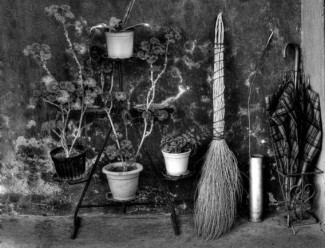 Maybe your neighborhood doesn’t have front porches or sidewalks or a farmer’s market or anywhere to shop except Target. Maybe despite the supposed modern hegemony of freedom and mobility, you find yourself stuck, thanks to our current economy, in a suburban wasteland. How can localism be for you, paradoxically rooted in such a place-less spot? I’d like to suggest one localist practice available from Port William to Portlandia, Naperville to Silver Spring, to all of us wherever we find ourselves: cleaning one’s own house. At home, we first learn to care for the people, spaces, and things particular to us. It is housekeeping in toto, not merely decorating or family dinners, that truly makes a house a home, a real place, and therefore housekeeping is a true school for the arts of place-making.

This means, of course, that housekeeping has been portrayed as the most mindless drudgery, capable of being performed by anyone, dull labor from which progress has now liberated us. Both explicit enemies of place and purported defenders of the housewife are guilty, peddling dreams of collectivized housekeeping or gnostic ideals of womanhood. Poet Phyllis McGinley clarified the subject of her collection of essays on homemaking (advertised as “talking back to The Feminine Mystique”) so: “When I speak of housekeeping I do not, of necessity, refer to housework. This is not a manual on how to polish brass or clean ovens or have the whitest wash on the block. Being a housewife may or may not entail all those tasks… But tasks is what they are, nothing more.”

Cleaning house is usually tedious, a Sisyphean task (with small children at home it feels more Promethean). That a person many enjoy it reflects more her own character than the nature of the work; even Phyllis McGinley acknowledged that there are two types of women: those that like to cook and those that like to clean (her contemporary, Peg Bracken, recognized a third type and wrote “The I Hate to Cook Book” and “The I Hate to Clean Book” for them. I highly recommend her works to all real housewives). It may well be more economically efficient and enjoyable to leave the dirty work to, in McGinley’s words, “apter talents” and concentrate a woman’s efforts on what only she can do. But to say therefore that it doesn’t matter who cleans a toilet looks at the matter strictly from the toilet’s perspective.

Ceding responsibility for these mere tasks exacts a price beyond Lupe’s wages (and social security contribution for the conscientious among us). As documented in Arlie Russell Hochschild’s book, The Outsourced Self, the sphere of life left to the increasingly anxious amateur shrinks smaller and smaller. In addition to the Merry Maids, Americans now hire professional baby proofers, potty trainers, and photo album organizers; we pay for dog walkers, wedding planners, and grave-site visitors. Thus we are living the dream of doing it all–or least having it all get done. “The secret of entertaining,” an extremely effective female co-worker once confided to my husband while hostessing a lively holiday party, “is a housekeeper.”

In an age when most professional women and not a few stay-at-home moms employ “cleaning ladies,” the “chore wars” of the seventies, that short-lived struggle of second wave feminists to extract more domestic labor from married men, seem so quaint. As Barbara Ehrenreich has written, “The micro-defeat of feminism in the household opened a new door for women, only this time it was the servants’ entrance.” My own decision to accept primary responsibility for the housekeeping in our family came both from a stubborn and probably naive refusal to participate in “Women’s Liberation” at the expense of other women as well as an equally stubborn and naive belief in the value of domestic labor. When I ceased to organize my life around things only I could do (and, as it turns out, there are actually a lot of graduate students in American history floating about), I was forced to confront just how little I actually could do–not nearly as much as my well-staffed fantasy self could. Coming up against those limits forced me to make choices about how to allocate my time and energy: instead of choosing how to get it all done, choosing what would get done and what just wouldn’t.

Taking the way home did not bring automatic flourishing. I arrived in many ways temperamentally unsuited to homemaking, almost entirely unequipped for it, and thus vulnerable to propaganda and advertisements. At first, I often spent my energies on things that were vastly inappropriate and imprudent, based on a sick hybrid of Martha Stewart, Proverbs 31, and Pinterest, inevitably inducing a sense of failure and guilt, a discontent accompanied by the vague sense that a magic solution was out there somewhere. A well-ordered home does not simply emanate from Woman. Re-skilling, it turns out, is a long and laborious process.

And even those who do not outsource housecleaning find their competence slipping away. The market increasingly reduces housekeeping to purchasing and applying the correct cleaning products. We are more and more dependent on consumption to keep house, as durable goods are made ever more disposable: mops, dusters, even bathroom hand towels. Kleenex markets this product–of course–in the name of hygiene: “People in the U.S. dry their hands on cloth bathroom towels approximately 200 billion times a year. The CDC guidelines for hand washing recommend hand drying with a single-use towel. Families have not had a practical alternative to traditional cloth hand towels in their home bathrooms… until now.” Studies show that folks in lab coats know better than you how to keep a clean and hygienic bathroom; fortunately, their expertise has finally perfected the paper–excuse me, the “single-use” towel for the non-institutional bathroom, available at your local Wal-Mart. With its Dry-Touch™ fibers, Cottony-Soft™ sheets and Pop-Up™ delivery system, you too can now have a home as comfortable and welcoming as the mall or airport! That the disposable hand towel seems to have been somewhat slow to take off–it’s no Swiffer or Magic Eraser, at least not yet–leaves some comfort that the American consumer has not lost all instincts about what makes a home.

For a home will never be made merely by reference to Kleenex, the CDC, or Country Living. Principles of hygiene, health, organization and tasteful decoration have their role for the discerning housekeeper, but more than anything, making a house a home requires attention to the particular people who inhabit our house, those we are allegedly making the home for, and the constraints and advantages of the landscape in which we make our home. Housekeeping is not about meeting, by my own or hired efforts, an abstract standard that in fact exists only for marketers and ideologues. Performing the tasks of housekeeping ourselves forces an intense, but otherwise often avoidable focus on our immediate locality. Keep your eyes on the close-by and use the farther-off only for your own purposes and eventually anxiety and dependency can be replaced with confidence and self-reliance.

I still have days when I ask my husband why I gave up doing the only thing for which I apparently have any natural talent. He reminds me that our family is actually pretty happy, even if the dining room – in which a toddler eats three times a day – hasn’t been swept in a week. Then I swear, for the umpteenth time, that I really will cancel my Martha Stewart subscription. Very soon. But slowly, painfully, like the Velveteen Rabbit, we can see our home becoming a real place, one that reflects our personalities, priorities, obligations, and constraints. I cook more than I clean, and when I do, I try to include our four-year-old, which means that in the end things often aren’t much cleaner for all the fuss. Our furniture is fairly beat up and mismatched–and not charmingly so. We read together quite often and rarely do arts and crafts. We garden a very little. For your family and your place, it will look quite different. But for you, too, housekeeping can be nothing less than an education in living with limits.