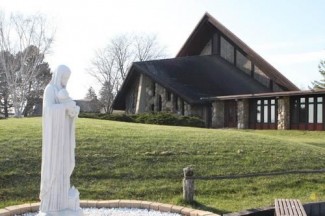 Last evening I had the joy of taking a dozen-plus college students to the Abbey of the Genesee for the first of this year’s “Newman Community Book Discussion with Monks.” The Trappist monastery is just a few miles down the road from the college, (heading in the direction Bill Kauffman’s Batavia—always a good sign!), and so, maybe seven or eight times a school year, a number of us pile into a few cars and sometimes using an article or chapter of a book as a touchstone, (hence: “Book Discussion”), we just chew the fat with some of the monks for an hour or so, and then end our short visit by praying Compline with the brothers in the Abbey Church.

No bells or whistles, no pizza and no flashy program title based on the usual formula for all college activities, “Something Cheesey, 101,” (“Dudes in Robes 101”?), the occasional trips themselves serve to work as a ferment over the course of a student’s time at college that’s as valuable, I’ve noticed, as anything else they’ll learn while at school.

Left behind on campus are the usual go-rounds and attendant stagnation of theist/atheist debates or, even worse, in-house Catholic, progressive/traditionalist nonsense. Instead, the word “immersion,” as well as something akin to a beginner’s swimming lesson, characterizes the feel of the place. The conversations are led by men who stopped standing on the side of the ocean crippled by childish fear, (Note: This is the stage before arguing about the existence of the ocean itself or whether the ocean is, in fact, a progressive or reactionary force), and actually took the plunge, yelling “Sink or swim!” and trusting all the while the voice of He who said “come.”

Simply put, the rapport between monks and today’s young adults is a thing of beauty. Most of our young come from an experience of parish life dominated by generation-based and media-fueled certitudes regarding things like the role of formal education, the meaning of social justice, and the importance of national politics that all seem a bit abstract, distant, beside the point, or just plain wrong. These thoughts barrage them relentlessly in school and on the idiot box for 12 years or more prior to college.

Call that an effort at thought control.

Now, the difference between Gen Xers and the Millennials is just not that big of a deal to monks inside the monastery; and, as for “media-fueled” ideas, for the most part they are blissfully left outside the monastic enclosure. There’s a freshness and originality of thought there which is the opposite of what many would think.  Mind you, these Trappists are pretty austere.

In contrast, and in the course of an effortless digression last night, our monk host started talking about “Those two voices inside you . . . you know, the one that calls you towards excess and the other one that beats you up for the excess. Yeah, they’re always chasing each other around inside you. They play off each other. Don’t they? This is Desert Father’s stuff. Scripture stuff. We call those the ‘passions.’ Here we cultivate silence and prayer so that we can watch them, understand them, and tame them.”

Call that an effort at inspiring us to control our thoughts!

This stuff is not distant to the young adults in the discussion. It hits decidedly close to home. The students’ look of wonderment conveyed something I know from a decade of campus ministry. He was talking about characters that exist, not on TV or at distant political conventions, but in their own heads, inside their very thinking.

The fact that this lack of control over thinking is tied to technology and is growing more pervasive by the year is something that’s obvious to me. And the fact that this problem ranks in priority, (Mark 7:20–“But what comes out of a person, that is what defiles,” or Owen Barfield’s “interior is anterior”), and is intimately related to the current political morass is something else that’s obvious to me, (and most likely Dr. Peters as well).

It was also of import to the ever-prophetic John Cowper Powys:

It’s astonishing to think how long humanity has existed and how little we have advanced in gaining control over our own thoughts.  To control your thoughts—that is the most important thing you can do;  far more important than to control your children or your food or your drink or your wife or your husband or your business or your work or your reputation.  He who can control his thoughts is at the key position of the Cosmos!  –Philosophy of Solitude (1933)

“You are your thought’s bitch.” It’s not very eloquent, but it’s my own coinage in campus ministry and if I’ve said it once, I’ve said it a thousand times when I’ve listened to a student whose seemingly ordinary thought that, for example, ‘tomorrow is going to be a bad day’ has developed a stranglehold on their mind disproportionate to the reality of the workings of the world and chance. And the reality of these inner thought-producing voices—these old pals of the Desert Fathers—be it the “tempter” or the “inner prosecutor,” has as much to do with students acting out while in college as does the availability of the outer temptations on campus.

In discussing a “mature appropriation of the Faith” that doesn’t get caught in the polemics of liberal vs. conservative, the monastic rejoinder last night was simply a shrug of the shoulders and a matter-of-fact answer, “that which produces true freedom!”

What has any of this to do with the Front Porch? It’s to plead, on behalf of young people especially, for a localist approach that includes the inner as well as the outer world, as well as one that fosters the bi-directional nature of the best localist concerns. Sure, tending to your backyard garden will help you ‘control the passions,’ but equally true is the fact that ‘controlling the passions’ will help your backyard garden! Fact.