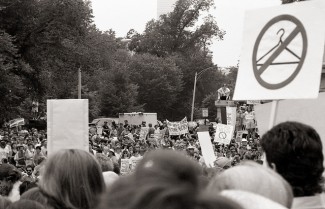 Louisville, Kentucky.  I have been trying to forget something I read two months ago, but some things cannot be buried before they are purged.

Journalist Hanna Rosin is on book tour now promoting the thesis that we’re about to experience the “end of men,” and though the definitiveness of her title is moderated in her interviews, her basic point is that women are gaining the upper hand all around. She has not convinced even the New York Times Book Review of this, but then her main thesis is not my subject today. I want to look at one of her side arguments.

As part of her book research, she spent a night hanging out in a bar with some Ivy League business school students, and wrote up the evening for the September issue of the Atlantic. Ms. Rosin had chosen this particular group because they had the reputation for living the Master’s Thesis version of Girls Gone Wild, and that is indeed what she found.

As the evening unfolds, a dirty internet picture gets passed around a table on a smartphone, as one woman is flipped the bird by her lover when someone mentions “marriage,” and another entertains a group of men with an imitation of an Asian call girl’s come-on. The only student who seems astonished by all this casual decadence is a South American, who says that in her country, women who act like this are either desperate or the type of professional who doesn’t need an MBA.

But the real kicker is in Ms. Rosin’s response. She writes: “So there we have it…. We are, in the world’s estimation, a nation of prostitutes. And not even prostitutes with hearts of gold. Is that so bad? Or is there, maybe, a different way to analyze the scene that had just unfolded?”

She goes on to say that the progress women have made toward ending the power domination of men is a “remarkable development” made possible by “not just the pill or legal abortion but the whole new landscape of sexual freedom—the ability to delay marriage and have temporary relationships that don’t derail education or career.  To put it crudely, feminist progress right now largely depends on the existence of the hookup culture.”

If this is feminism, then pass me the patriarchy, please.

How do I take seriously someone who wants to argue that being compared to a prostitute is something to celebrate?  But I have to, and not only because this is the Atlantic. It is campaign season, too, and as the presidential race careens toward its finish November 6th, with a big fight for the women’s vote, both news coverage and campaign rhetoric is focussed on a certain narrow definition of what “women’s issues” are—what women (or at least a large segment of them) really want, and finally, what Hanna Rosin says lies at the core of feminism. And though she may be wrong about many things, I think she is right about this.

As she says, at its base, feminism is not really about equal pay for equal work, or bank presidencies and board seats. Nor is it fundamentally about the right to shoot a howitzer, or share the housecleaning, or any of those social role changes a feminist would file under “respect.” Those are side issues and benefits. What feminism is really selling is a woman’s ability to be as sexually emancipated as a randy man, without the risk of having to take a pregnancy to term.

Hence the constant, from-the-beginning emphasis on abortion rights and defending Planned Parenthood. Hence the bra-burnings as iconic act. Hence Cosmopolitan’s millions of readers compared to Ms. Magazine’s much smaller number. And hence the internal logic of a movement which necessarily transformed Gloria Steinem’s 1960’s argument that Playboy Bunnies were being economically and sexually expoited, into the notion that the Bunny can be a symbol of female sexual freedom and power, as long as she herself chooses the heels and the tail.

Birth control and abortion rights aren’t in and of themselves going to shatter a glass ceiling or stop spouse abuse. But they sure will help you play around.

In a tasteless video a PAC called the Jewish Council for Education and Research created in support of the Obama campaign, a suburban liberal family that has become listless in its support of the President is harangued by its youngest daughter and her buddy, actor Samuel Jackson, to “Wake the F— Up.” Wearing his trademark Che Guevara-like beret, Jackson pops up all around the house, rhyming different political arguments at different family members in turn. Granny and gramps get yelled at about the dangers to Medicare. The older brother hears about civil rights and cuts to college loans.

But when Mr. Jackson and the little girl interrupt the family’s high-school-age daughter and her friend while social networking, what does the nine-year-old say to them but, “A vote for Romney is a vote to let Planned Parenthood get cut!” The video presumes that for teenage girls, access to birth control and abortion is the only issue.

If it is unfair to saddle Mr. Obama with a video his campaign would never have approved, then it must be said his own language is similar. On his official campaign website, under the large banner headline “Rolling Back Women’s Rights,” the copy reads: “Mitt Romney is committed to overturning Roe v. Wade, and has said he would ‘get rid of’ Planned Parenthood. He has been endorsed by candidates and lawmakers across the country who are equally committed to moving backwards. Take a look at the map below to see how they’ve attacked women’s rights.”

Fourteen states are then highlighted and all but one link to Mr. Romney’s or other Republicans’ statements opposing abortion, contraception or Planned Parenthood. Only the fourteenth discusses equal pay. The website does talk about pay and healthcare costs in other other places, but there is no question which women’s issue the President has chosen to emphasize.

And polls say he is right. A Gallup Poll released October 18 showed that abortion was the top issue for women in the twelve swing states, at 39 percent. The next highest issue was jobs, at 19 percent.

The poll did not ask respondents if they were for or against abortion, but while there is plenty of pro-life feeling in the country, the language of any number of politicians, editorialists, bloggers, and rank-and-file posters on the internet mirrors the President’s. If there is a single issue for a certain type of single girl, it is un-family planning. Ms. Rosin’s grad students, like many other women, have simply taken the sexual freedom argument to its extreme.

One other point about Ms. Rosin’s article. As her quote above shows, she is glad that these young professional women, by forgoing real relationships for a series of casual affairs, can keep themselves free to focus on their studies and their career. Most of them have already left the places they grew up far behind; now they can keep themselves from being limited by a person, too.

Quite aside from the fact that Ms. Rosin never argues that these women could keep themselves equally heart-whole and obligation-free by simply not dating or at least not sleeping around—chastity is a dead letter for her—she is making the the ultimate case for deracination. She has taken Richard Florida of Who’s Your City? fame one logical step further by saying: If you think you’ve come a long way, baby, uprooting yourself and freeing yourself from the limiting opportunities of home, think how far you’ll go if you keep yourself likewise free of ties in some of your most intimate relationships.

That, ladies, is emancipation—from everything worth having.

Photo of a Beacon Hill rally by Paul-W

Bradley Manning, and my Biggest Disappointment in Obama (Yet)