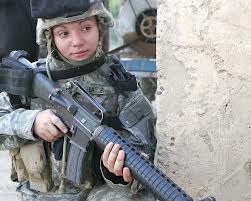 Women are now cleared for combat positions in the American armed forces, and for all the ladder-climbing that now allows. On January 24th, Defense Secretary Leon Panetta lifted the direct ground combat exclusion for women. It is impossible to listen to his press conference and not feel that the emphasis is all on career fairness and “opportunity” and much less on fitness for what is, after all, a career in the use of deadly force.

“In life, as we all know, there are no guarantees of success,” Sec. Panetta said. “Not everyone is going to be able to be a combat soldier. But everyone is entitled to a chance. By committing ourselves to that principle, we are renewing our commitment to the American values our service members fight and die to defend.”

One NPR reporter interviewed some soldiers at Ft. Campbell, which sits on the Kentucky-Tennessee border. They were hesitant to criticize the change, perhaps because they worry that public criticism could damage their own careers. And yet one young man said with tactful euphemism that he was concerned his fellow soldiers would have to clean up their language now, with women in the platoon. That is not really what he meant, probably, but then we all know what the real problems will be.

As the Administration and many others are quick to point out, women have been in combat positions already and a number of them have had the honor of dying. This battle was lost years ago, when women first entered the services. The opportunity-creep, given our culture of equality of opportunity despite the inequalities of all our differences, was inevitable.

Two things come to my mind: first, how very comfortable this President is to do by Executive regulation what he cannot do by building consensus in Congress. Mr. Obama is not alone nor is he the first to assume this kind of prerogative, but then he did so complain about the lack of consensus-building in Mr. Bush. Anyone who grouses about how quaint or unrepresentative monarchy is in other countries needs to take a harder look at the actual power structure here. Our three branches of government are very top-heavy with the Executive.

And also: someday, and I may live to see it, we will enter another world war and the draft will be resumed. And when that happens the Selective Service will come for our daughters as well as our sons. If the government doesn’t institute that rule itself, a parent of four boys will sue to force the issue. It will only be fair.