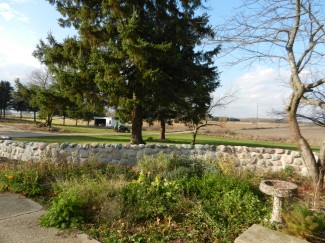 Remus, Michigan. The view from my gray fieldstone front porch on this mid-November Sunday afternoon is bleak, bleak, bleak. Brown fields stretch out before the house on either side of the long driveway, a dramatic transformation from the lush green alfalfa on the left and soybeans on the right that graced our property’s entrance only two months past. The driveway ends in M-20, a busy enough state road, with a view of just three neighbors’ houses across it. These properties, and their inhabitants, provide me with ample opportunity for reflection on the relationship between people and place when taking in the view from our sun porch.

The neighbor in the old white farmhouse directly opposite our property, Ruth Anne, died a few weeks ago and I attended her funeral at the Catholic church just up the road from here, where she served as the organist for twenty-five years. Though an illness left her legally blind in recent years, Ruth Anne was able to live independently in the large farmhouse. She had been born there seventy-eight years ago, she once told me, and knew every doorknob and step on the stairs by instinct. Extroverted and friendly, Ruth Anne was the first person to officially welcome my family to the neighborhood two years ago, when she walked across M-20 and down our rough driveway alone to bring us a bouquet of flowers.

Just this past summer Ruth Anne threw a birthday party that the kids and I attended at the home of the neighbor to the immediate right of her farmhouse. Mr. Stout, a retired fruit farmer who lost both hands to machinery some decades ago, turned ninety-three this year. He too lives independently and, with the aid of hook implements in the place of hands, continues to run a front yard business of growing and selling flowers, mostly impeccable gladiolas sold in bulk for local weddings. A creature of habit, Mr. Stout is up before dawn every day during the growing season, tilling the land and caring for his “business” until he closes the garage doors at eight in the evening. The long Michigan winters are hard on him, he once told me, because he doesn’t care to watch television and is restless when he isn’t working.

To the east of Mr. Stout’s small, modern house is a charming Victorian home and picturesque red barn belonging to Mr. Oswald. Coincidentally, Mr. Oswald also suffered a hand injury from a machine during his decades working as a home economics teacher but lost just a few fingers. He sells all sorts of antique farm implements, wagons, and country paraphernalia in his front yard, which looks a bit like an Amish museum.

Returning to our own front yard, it is full of scraggly herbs and a few flowers that were able to survive the early frosts that swept through in October. Encircling this optimistically named “butterfly garden” is a low, curvaceous stone wall worthy of Bilbo Baggins’ Bag End. Thanks to a donation from a field belonging to our neighbor on the west side, it was made last year from the same fieldstone as that of the 1867 porch.

Directly across from the porch are the withered remains of the summer’s bounty: empty cornstalks, rotting eggplant, remnants of too many tomato plants. They are all waiting to be tilled under to serve their final purpose as fertilizer for next Spring’s plantings. On either side of the garden are large tracts of tilled soil prepared for organic strawberries that my husband and Jim, his trusty sidekick of a friend, will sell next summer. The rest of the property consists of three outbuildings, 15 acres of tillable land rented out to local beef farmers to grow alfalfa, and forty acres of woods.

This farm will be a work-in-progress for the rest of our lives and, God willing, our children’s. That is the challenge and blessing of owning a property like this– it has provided us with a permanent place to call home where family memory can take root, but only inasmuch as we contribute to its character. We are the fourth owners since it was built by Quaker settlers at the dawn of Michigan’s statehood in the mid 1800s, and there are few local families who do not have some connection, some personal memory, of this property long before we set eyes on it. Its history, though brief compared to most settlements in the world, demands a certain reverence for the past.

Just one hundred and sixty years ago, the forests of Michigan were so thick that it took the original owners, Eli Gingrich and family, three days of exploring the property they had purchased to find the original markers they left. The family painstakingly tiled the swampy forest and cleared enough land to grow potatoes for the Union Army, an arrangement that had lured them to brave the mosquito-ridden new state. Their land deed was granted by the Federal government and signed by Abraham Lincoln, which still hangs in the house today, along with their expense book and several other remnants of past inhabitants. Following the Gingrich family came the Schiffer family, who held onto it for several generations. Finally a generation of five wild Schiffer boys inhabited the old house, which saw the deaths of two thanks to aerial stunts in their airplanes over the alfalfa field. One of these five boys lasted to old age and sold the property to a friend, who sold it to us twelve years later.

Our family brings a new chapter to the life of the property, one we hope will be less tragic than some of the previous tenant’s experiences. Being Catholic, we requested a house blessing from the new priest at nearby St. Michael’s church directly upon moving in two years ago. We encouraged him to be as thorough as possible given the property’s history, and I was pleased to see that he took his task seriously when he even descended to the murky Michigan basement to douse the massive foundation stones and mice hiding-holes with holy water.

Buying the farm has been a blessing for our family in ways both tangible and spiritual, and, though its continual renovation and vast property maintenance has and will cost us much more than other places we could have chosen as permanent homes, living there has felt like the natural choice from the first. There were many coincidences and conveniences that led us to make the risky purchase– the lower cost of land at the time and the fact that money can be made from land rather than only spent on solely residential properties, the proximity to our church and my mother’s home in the neighboring village of Mecosta, and my familiarity with the place and its residents.

I am the sixth generation from Mecosta on my father’s side, but now we are officially residents of the town of Remus. Labeled a rival settlement by Mecosta locals, Remus’ agricultural character has nevertheless long appealed to me. Mecosta was a lumber boom-town, and my ancestors were some of the few left behind when the land was cleared and the industry moved westward. In Remus, pioneers came to settle the land for their families and future generations, and that difference of intention has left a legacy that is still visible in the character of the two communities today. Remus’ motto is “Farms, Families, and Friends” and in keeping with that spirit of tradition and roots, many of the original families continue to farm or reside on their original properties.

Mecosta is something of a darkly charming Midwestern ghost town about four blocks long. Some local institutions and community members, myself included, have been reinventing the village of late as the literary capital of the area with a grand, new public library, three quality used and rare book stores, and a large elementary school serving 300 children from the surrounding area (just 136 souls less than the entire population of the village). Though we now also consider ourselves proud members of the Remus community, Mecosta is still my “hometown” and my days are spent driving the short loop between our farm and my Mom’s home and academic center, the cultural and social hub of our lives.

Despite my enduring affection for my hometown, there was one reason in particular I couldn’t resist moving five miles down the road to acquire a rural Remus address: the fact that during the academic months of the year my family and I call a very different place home, due to our work for a study abroad program– the Eternal City of Rome. When I speculated that my family’s life for the foreseeable future would be divided between two opposites, Remus and Rome, it was too much of an opportunity to pass up. The country mouse/city mouse lifestyle offers our children an incredible wealth of contrasting experiences that my husband and I believe will give them an education in keen observation, rare objectivity, and, ideally, wisdom.

Our dwelling in Rome is a “cozy” (i.e. miniscule) house, converted from a former office, built into one of the ancient border walls of the Empire’s capital. There is no front porch on this home that we rent from an order of monks, and the front view is of the back of a four-storey condominium. The traffic on the way to and from the children’s Augustinian elementary school (still run by nuns in full black habit) is perilous and stressful. Despite these daily displeasures of city life, we cannot help but acknowledge our great privilege in raising our children in the historic center of Western civilization. However, when we tell Roman city-dwellers that we own a 58 acre farm back home with a view of vast fields and forests, they wistfully express disbelief that such a thing is still possible in the modern world. The difference, I suppose, is that Remus is in the infancy of its history by Roman standards and, if the future generations we are preparing the farm for are fortunate, will resist modernity a little longer.