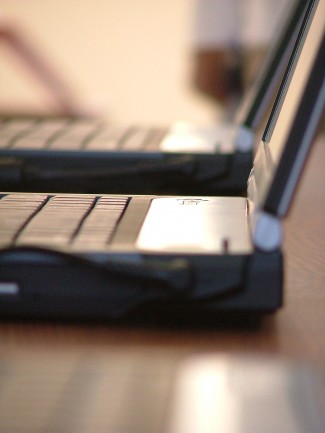 When he was governor of Maine, Angus King made sure that there was a computer on the desk of every middle-school child in the state.  As I write these words, Mr. King is boasting of that accomplishment as he runs for the United States Senate as an independent dallasinistra.
I am, of course, writing this essay on a computer.  I’m not entirely happy about that.  But it’s a machine, I use it, I put it away – or try to put it away.  Sometimes I have to make a vow to put it away, because the quick gratification that the on-line computer provides – click! – is addictive.  We all know this.  No pretending that it isn’t.

That’s a subject for another day.  What I want to look at now is the computer as a symbol of what modern education has become, and as a diagnostic sign of our severely depleted souls.  For the modern educator – and many people who consider themselves conservative will agree with this – education is essentially a problem of techne: it is technological, in the broadest sense of the word.  I don’t mean that it employs tools.  I mean that it submits to them.  The child is viewed as a problem that needs to be solved, a variable that needs to be settled, a vessel that needs to be filled, aconnection that needs to be forged.  How do we give children the information they need?  Or, what methods can we use to ensure “student learning objectives” or whatever the techno-lingo is?  What skills – notice the word imported from manual labor – must we build up in them so that they may succeed in the world?  Notice, succeed: a plank succeeds if it holds up the porch, a winch succeeds if it lifts the stone, a commercial succeeds if it brings in a certain profit.

But human beings are not riverbeds for pile-drivers to sink concrete piers into.  Data are not information, information is not knowledge, and knowledge is not wisdom.  What is the difference between the computer and a good book?  A good book for boys, say: Kipling’s Captains Courageous.  One could, I suppose, read Captains Courageous from a computer screen.  I doubt it.  One might zip through the pages.  But the book, also a tool, no doubt, is the most sophisticated and human tool we have ever produced.  I hold it in my hand.  I turn its pages.  I see its drama portrayed in ink illustrations here and there.  I have memories of words, memories that are visual, auditory, and tactile.  I can set it down for a moment and think.  I can pick it up again later.  I can read the last chapter over again.  I can read the whole book over again.  In its words the mind of a man, his personality, his thoughts, his manner of expression, his view of the world, enter my own mind; not as a commercial battering against my ears, but as a friend, with an arm round my shoulder.

I take Captains Courageous with me.  The book does not have to be plugged in; only opened.  Or closed; I take it with me that way too.  I walk down to the big swampy pond a few blocks away, and look at the fish darting about, and I think of Disko Troop and his jocular son and the once-spoilt castaway Harvey, with the seawater sloshing over the gunwales, while nets full of cod are emptied aboard and the fish packed in the hold, hours and hours through the cold night.  The book is a companion.  Robert Louis Stevenson, dead long ago, is not dead, but speaks to me, even when I am but walking down the path.  The words, the tale, artfully constructed, read in blessed solitude, enter my thoughts like the undertone of a song.  I say, “I wish I had been that lad, fishing off the Grand Banks, working like a horse and sleeping like a dead man.”  No movie can do the same, especially not when “special effects” ruin our slender opportunities to attend to a face, a gesture, or a word.

Think of that encounter with another human mind.  Think of a small boy sitting on the knee of his grandfather, looking into his face and listening to how he once went barnstorming through Italy, earning his bread and oil and a dry bed by playing baseball for Italians who had never seen the game.  Who is such a fool as to suggest that the child would do better to skitter through the internet, with the keyword “Italy”?  The real complexity of that encounter makes the screen on the desk, for all its technological intricacy, look like a stone knife or a pointed stick.  But its worth abounds far above the complexity.  It stirs in the heart.  It is mingled with love and admiration.  It declares, “This was a good thing to do!”

Even a dog cannot be well trained without affection.  Dogs, we know, cannot just be inserted into the gaps of a contentment-machine for wealthy professionals.  Dogs need fresh air, exercise, play, the adventure of the Pack.  They should not be kenneled up nine months of the year.  They should not be institutionalized ten hours a day.  I would not do to a child what some people do to their dogs.

Yet we persist in believing that children, because they are intelligent, are more malleable than dogs – notice the word taken from metallurgy.  We will not see that it is just because they are intelligent, that their teaching can never be training, and can never subordinate the personal to the mechanical.  They need the adventure of love.  They need the fresh air of contemplation.  Try to find those in a blockish institution of a thousand people, noisy, stale, and impersonal – with a computer on every desk.

May I venture an analogy?  Japanese children not so long ago learned arithmetic by means of a simple and human-scale tool, the abacus.  For all I know, they still do.  The abacus gave them the feel of numbers: they could see and feel, in thinking that was arithmetical and kinetic at once, what eighty had to do with a hundred, or why we “borrow” from the tens to take eight from three in the ones.  Then too there were the human-scale tools of pencil and paper.  When you multiply 734 x 48, you “see” the partial products develop; you learn a sense of what’s right and what’s probably wrong.  Nothing of that comes across when you enter numbers on a calculator, absolutely nothing.  You can as soon by such means to be comfortable with numbers, as you can learn to be comfortable with members of the opposite sex by looking at pictures of them.  You might as well call yourself a carpenter because you’ve hammered virtual nails into virtual boards.  A child who types numbers into a calculator has learned nothing.  He is in fact being treated as a machine.  The calculator doesn’t know what the numbers on the screen mean; it’s a “good” calculator if the numbers happen to be correct.  The child doesn’t know what they mean, either.

If the machine fails even at this, at arithmetic, how much more colossal must the failure be as soon as we enter upon the human disciplines: history, literature, and art.  Unless perhaps that failure is “success.”  A boy at a pond with a fishing pole, thinking about this and that, is free.  If he has a song to whistle, or a poem to mull over, or if he is thinking of Horatio at the bridge, he has begun to reap the fruit of a truly liberal education.  But we don’t want that freedom for him.  We want him instead to be tied to that infernal thing on the desk – and we call it progress.