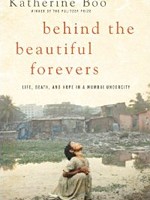 The final sentence in Behind the Beautiful Forevers–Katherine Boo’s wonderfully written, devastatingly detailed narrative of several fascinating, despairing stories that took place over the period of a couple of years in a Mumbai slum called Annawadi–sums up the message of the whole book as well as any concluding sentence I’ve ever read does: “If the house is crooked and crumbling, and the land on which it sits is uneven, is it possible to make anything lie straight?” There is a deep truth, and a challenge, in that sentence: one which I was already cognizant of, but which, having just finished this much-praised book, will remember that much more firmly. Anyone concerned about the way in the shape and foundation of one’s home or community may either open up or foreclose possibilities for justice or freedom or virtue needs to remember it–and reading this fine book is a good way to help that remembrance along.

The obvious referent of the final sentence is the wretched tale of Abdul Hakim Husain, a young man (perhaps 16 years old, perhaps 19–“his parents were hopeless with dates”) whose tragic story forms the primary backbone of the book, though his life is only one of dozens whom Boo skillfully introduces us to. Very briefly, Adbul is the primary earner in his family of eleven, a scavenger of refuse whose skill at picking through and sorting different types of trash to later be sold to recyclers had given his family, through years of work, a tiny amount of financial stability and hope. They had been able to afford rejected bricks (the slum was surrounded by rapidly constructed luxury hotels, designed to serve the newly rich of Mumbai flying in and out of the nearby international airport, on whose land the slum sat) for their hut, making it the sturdiest dwelling along their makeshift street; they had been able to afford the tuition for a “third-rate Urdu-language private school” for the second-oldest son, Mirchi; they owned their own vehicle, giving them an edge in transporting the garbage they sorted through to recyclers; they’d even been able to save enough to make a deposit on a plot of land in a predominantly Muslim community outside of Mumbai, thus giving the the Husains the hope of becoming actual landowners and escaping the 3000+ person, half-acre collection of illegal, more or less desperately poor and uneducated squatters that made up Annawadi.

But it was not to be. As Boo expertly chronicles, the deprivation of Annawadi did not make for a united community, but rather a constantly shifting, usually bitter and suspicious, relentlessly competitive and often corrupt group of individuals. Anti-Muslim sentiments, common in Mumbai, were part of it, but most of it was just the plain and ugly truth that, when one lacks any kind of stable home to retreat to, or vocation to identify with, the smallest slights and most pathetic grievances can take on hysterical importance. The day came that the Husains were attempting some upgrades to their hut, installing some floor tiles and a stone shelf, working to make it level. The weak bricks which made up their walls crumbled somewhat in the midst of the construction, shaking their next-door neighbor’s hut, occupied by another Muslim family, dominated by their sexually promiscuous, one-legged mother–who had been, predictably, subject to multiple levels of harassment, discrimination, and mockery by Annawadi’s other residents–named Fatima. Some sand fell into the rice she was cooking. A fight broke out, with shouting and accusations aplenty; Fatima claimed that she would put the Husains “in a trap,” complained to the local (and completely corrupt) constabulary at the Sahar Police Office, then dumped kerosene on herself and set herself on fire. As Boo puts it, Abdul’s life “exploded” at that instance. What followed was arrest, police beatings, long confinement, bribery and doctored hospital reports and false claims on all sides, the collapse of the Husain’s scavenging business and the loss of all their meager savings, and criminal trials which ultimately left Abdul’s father exonerated of the accusation of inciting Fatima to commit suicide but Abdul in legal limbo, perhaps permanently.

There is much more to the story than that, and that is only one of the many stories Boo has to share. But that specific reference–to Abdul’s attempt to build a shelf level and straight, when his family’s wall and foundations were rickety in the extreme, and the unforeseeable consequences which followed–not only encapsulates Abdul’s story, but connects to the larger theme of the whole book. In an environment where the law is only sporadically enforced (and then usually only when a hefty fee is paid in advance), where criminality are the rule (at one point in the story Abdul resolves to no longer traffic in stolen metal, but in the face of complete deprivation abandons that pledge, to his regret: “I tell Allah I love Him immensely…but I cannot be better, because of how the world is”), where violence and despair go hand in hand (the book features several deaths, including the suicide of a young girl who saw death as the only way to escape beatings from her parents and an arranged marriage she detested), exactly what can be accomplished? That some things are accomplished is undeniable: among the Annawadi’s inhabitants are at least a couple of young people who manage to get college educations and move out of the slum-squatting class (though in the case of one of them, that’s at least partly the result of her mother’s corrupt political maneuvering and marital infidelities). But for the great majority of the slum’s residents, most of whom had fled to Mumbai seeking opportunity in the face of starvation in the countryside (the rural village home of one of the book’s main characters was in the midst of drought, with much of the little available remaining land having been taken away by “large-scale corporate and government modernization projects”) what they faced was the enduring continuation of the same: scrambling day to day, earning just enough to eat. No collective action was possible, because there were no collective resources to be harnessed to improve one’s lot, and no trust that any such resources, even if they existed, could be used responsibly. While not quite a dog-eat-dog world (Boo notes that the rapacious yet resourceful folks she focused on lived in the comparatively more wealthy part of the Annawadi slum; they actually had huts, didn’t sleep in the streets, and didn’t have to eat rats or grass to survive, as the truly desperate of Annawadi residents did), it was close.

Boo, at one point near the end of the book, makes a rare, observational aside about what she had seen in her years of reporting:

At Annawadi, everyone had a wrong he wanted righted: the water shortage, brutal for three months now; the quashing of voter applications at the election office; the worthlessness of the government schools; the fly-by-night subcontractors who ran off with their laborers’ pay. Abdul was one of many residents who were angry at the police. Elaborate fantasies about blowing up the Sahar Police Station had become the secret comfort of his nighttimes. But the slumdwellers rarely got mad together….Instead, powerless individuals blamed other powerless individuals for what they lacked. Sometimes they tried to destroy one another. Sometimes, like Fatima, they destroyed themselves in the process. When they were fortunate, they improved their lot by beggaring the life chances of other people.

What was unfolding in Mumbai was unfolding elsewhere, too. In the age of global market capitalism, hopes and grievances were narrowly conceived, which blunted a sense of common predicament. Poor people didn’t unite; they competed ferociously amongst themselves for gains as slender as they were provisional. And this undercity strife created only the faintest ripple in the fabric of society at large. The gates of the rich, occasionally rattled, remained unbreached. The politicians held forth on the middle class. The poor looked down on one another, the world’s great, unequal cities soldiered on in relative peace.

I think about my own home–on a quiet, older suburban street in Wichita, KS, in walking distance from our children’s public schools and our church, in biking distance from my work at a small liberal arts college–and I reflect upon just how much social effort and investment, how much taxation and regulation, how much civil religion and traditional instruction, how much labor unrest and market response, and how many years of all of the above had to go into making the ordinary things I take for granted possible. Here, we have citizens who will call for ambulances and even attempt to help when they see someone hit by a car and dying in the street; police who respond to complaints and won’t immediately ask for a bribe; schools where instruction of whatever quality actually takes place day after day; fathers who know that beating their wives and raping their daughters is immoral and wrong and may even (if prosecutors are doing their job!) send them to jail; jobs where employees have protection from arbitrary dismissal and receive a decent wage; city governments that will acknowledge that a backed up sewer is public health hazard and ought to be fixed; hospitals where trained care-givers have, at the very least, enough beds and drugs and needles to minimally do their work. And that leads me to think about how even a slight fraying of the social fabric–through family breakdown, through the retreat from civic obligations, through the privatizing of public responsibilities (Boo writes trenchantly about how the wealthy of India had, throughout the boom years, “typically tried to work around a dysfunctional government” through setting up their own schools and security agencies, rather than improving the public safety net), and perhaps most of all through the government and corporate actions (and inactions) which leave people without any sustainable or dependable ground to build upon, and thus have no choice to flee, migrate, follow the whatever random winds of opportunity they think they see, even if it results them crowding their families into mostly hopeless slums–can start to unwind the many threads that make up the whole.

We’re lucky people, the great majority of any of us who are reading this website–the ground on which the communities we are part of were built is, mostly, pretty solid. Not as solid as it might be, but far more solid than the sewage-infected ground of Annawadi. Boo did not write this book, I think, just to get her readers to think “there but for the grace of God go I”–but such is clearly one result of her writing, and it’s not an unreasonable one. Those of us who have families and homes and neighborhoods and communities (local or national) where justice and freedom and virtue are, if not automatic, than at least genuinely available opportunities–as opposed to at-best random, unaccountable happenstances–need to keep in mind the enormous political, cultural, economic, and social work which has done into distinguishing our fortunate environments from those of the Husains, and guard against letting our frustrations with the complexities of modernity lead us into picking apart the very ground our world is built upon.

Hospitality and the Hopis: Piki