Front Porch Republic
Home Articles On the Localism of the Spheres 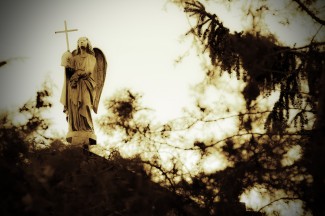 I have a friend who is a cloistered Trappist monk and his current obsession is the ‘outer’ and decidedly non-sedentary goal of running a marathon (on the back forty of the monastic enclosure).   The sense of accomplishment inspires him.   In contrast, or rather, in compliment to that, my latest obsession as a rather hyper-active householder and  someone ‘out in the world’ is the ‘inner’ and sedentary task of finishing the very dense and lengthy major and minor trilogies of the Orthodox theologian Sergius Bulgakov (1871-1944), who David Bentley Hart places “among the most original and brilliant of twentieth-century theologians.”

Can somebody give me a “Ying-Yang!”?

It’s in that spirit of complementarity, where the inner inspires the outer and the outer inspires the inner, along with my current journey through Bulgakov’s book on angels,  Jacob’s Ladder, (think of angels ‘ascending’ and ‘descending’), that I offer a few reflections on localisms, inner and outer/above and below.

Bulgakov’s theme, essentially, is that there is an ontological correlation between the angelic realm and the human realm.  He cites Genesis and Revelation as the two touchstones of this theme: ‘‘In the beginning God created the heaven and the earth’’ (Gen 1:1), and ‘‘He measured the wall thereof, an hundred [and] forty [and] four cubits, [according to] the measure of a man, that is, of the angel’’ (Rev 21:17).  Providing a sense of how this correlation works is the burden of his book-length exegesis of Scripture, tradition and art, which includes a profound personal experience of his own that’s relayed in the book.   In learning about the angelic realm we learn about our own, and it’s not devoid of lessons for localists.

Now, since any reflection on the angelic realm is going to bring to mind the word “hierarchy” along with its connotations of rigidity and a top-down direction, it’s important, if it’s to have any bearing on the aspirations of freedom-loving localists, to keep in mind the freedom and limitations in the angelic realm, as well as the bottom-up potentialities of any true hierarchy, which often get lost in conversations about that form of organization.  Regarding the first of these, a world of limits and freedom, Bulgakov reminds us, (regarding the guardian angel but also, by inference, all angels):  “He is only a creature, limited in all things, no matter low lofty he is and likewise he is not a blind instrument of God’s will.”  There’s autonomy and creativity in the lower hierarchies that’s necessary for the grand design.  Regarding the second, he highlights St. Paul’s enigmatic assertion in 1 Corinthians that “the saints shall judge the angels.”  Apparently the lower, in some sense at least, affect and even judge the higher.   The various levels and ‘choirs’ simply have different roles and spheres of responsibility that are respected by all.

Is it any wonder, then, that the creative “first-attempt” at a social order characterized by subsidiarity, a world described by Donald Livingston as having competing power centers such as free cities, dukedoms, bishoprics, papal states, small republics and margraves, was a world where the correlation of the angelic and human realms was taken for granted?  The common wisdom of this world was that not just every individual, but every parish, every town, every people and nation, (and hell, for all I know, every tavern and ballpark), had its own angel.   In other words, such political sounding names as Principalities, Powers, Dominions that are ascribed to the angelic hierarchies are, it should be remembered and as my neighbor would say, “not for nothin’.”

Is it any wonder, too, that the advent of the modern, nefarious social arrangement constructed on the atomized individual and the State, with its attendant atrophy of intermediary institutions, corresponded to the rise of materialism on one hand and to “me-and-Jesus” spirituality on the other?   Seen in this light, the loss of the local school’s traditional Christmas pageant and the town’s Nativity scene, both replete with honor towards the heavenly hosts, seems a little more ominous to those of us that favor a federated social order.  Ominous, too, is the advent and growth of “moralistic therapeutic deism,” which sociologists Christian Smith and Melinda Lundquist Denton, (and Rod Dreher, too), suggest is the dominant religious fall-back position of large segments of American youth.   Me-and-Watchmaker is, it seems, even worse than me-and-Jesus, at least in terms of a correlative politics.

I should mention, for the record, that the political musings are completely my own and don’t clutter Bulgakov’s wonderful book.

Yes, yes, the world of those associated with the study of angels contains its fair share of gnostics, narcissists, new-agers, nuts, and Harold Blooms.  But that shouldn’t scare or detract from the worldview any more than some cultish localist’s rants should dissuade one from reading Wendell Berry.  Let the great tradition, personal experience, and right thinking be your guide.

The practical upshot of these rather otherworldly reflections seems to run along at least two lines.

One is that, if the Owen Barfieldian “interior is anterior” is true, then in addition to its assortment of Berry, Day, Chesterton, and others, any true localist’s library should be incomplete if it didn’t also contain something on angelology by Aquinas, Pseudo-Dionysius, Bulgakov, Gregory the Great,  or even Rudolf Steiner. These writings can be read as solid, localist tracts on subsidiarity and localist theory.

The other is closely related.  It’s that, in keeping with the beginning of these ruminations,  it would seem to be true that inasmuch as people who are studied in the workings of the world of angels make good localists, it’s also true that people who are sympathetically disposed to the worldview of this website would make good explorers of the world of angels.  They’re naturally attuned to the music of the spheres, or what Goethe called, “the speech of angels.” Localists who, like monks, value stability and the permanent things, make natural (because grounded, community-oriented and, as a result, sane), spiritual explorers. In thought and prayer, it’s wise to explore this world, (notwithstanding Rilke’s admonition that “every angel is terrifying”).  Paraphrasing Alexander Pope, “Angels would rush in to meet you where fools should fear to tread.”