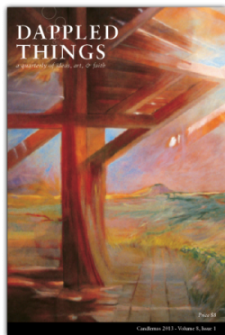 Berwyn, PA.  In his Degrees of Knowledge, Jacques Maritain argues that one central fault of the modern mind has been its propensity to think of mathematics rather than metaphysics as first philosophy.  If we take number for the foundation of all things, then we deprive ourselves of the capacity to think of being; we truncate reality, and fail to see the elegant ascent the human mind can make from the immediacy of sense experience, by way of abstraction, to the conception of being and, at last, — by the grace of God — to the immediate experience of Being.  Too assiduous a delight in the quantitative may conceal our intellectual natures from us, and disfigure our lives.

And yet, from Galileo through the contemporary Physicist, number has seemed to be something like the language of God (a phrase sometimes used to describe DNA, but that utterly misunderstands what DNA actually tells us about reality, as if God only spoke living things into being).  As someone concerned with the way in which art, and poetry in particular, reveals being to us, the way in which it clarifies the vision and initiates us into a richer way of dwelling in the Real, I have always appreciated the admonitions of Maritain and others who would draw us, with St. Thomas Aquinas, to think being first, last, and always.  And yet, precisely as a practicing poet of sorts and as a sincere amateur in the reading of poetry, I have long since come to the conclusion that poetry without verse is not really itself.  That is, any good ontology of poetry must confess that number dwells deep down near the essence of the poetic, whether one is thinking in the broad terms of proportion in any art work, or whether — or above all when — one is thinking about what makes poetry, in English, to be itself: verse, that is, the counting of syllables and accents, and sometimes rhymes and stanzas.  So what can a poet with a love of Aristotle make of these facts?  What can he tell us about the “Pythagorean Temptation”?

Two years ago, I was asked to provide some thoughts on this subject in response to the poet David Rothman’s essay, Lisping in Numbers, for Think Journal.  Just this Spring, Dappled Things has published a revised and slightly extended version of the essay in its Candlemas issue.  You can read the whole essay here, but for those who must count their minutes before the computer screen with parsimony, I provide this passage, which is my personal favorite:

Aristotle synthesized form and matter, number and being. Before him, Plato’s dialogues articulated both light and number as first principles. Indeed, variations on these propositions speckle the whole history of western thought, sometimes in surprising or less obvious terms, down to the present moment. How unsurprising, then, that, for a poem to be a poem, it must be measured, proportioned by number; and yet, it must also show forth a radiance beyond mere meter. And, how fitting that Rothman’s defense of verse should restore Pythagoras to his proper place, near the center of any discussion of art and beauty. The splendor of a poem must be given form—it must be counted.

But we are moderns, and modernity does not permit us to end on such a harmonious note. Our world is absolutely saturated in number and talk of number—as much as was the world of Plato and Aristotle. But ours lacks their synthesizing genius. In the public realm, only matter and motion are counted as real, and these, only because they are resolvable into numbers we can manipulate. Behavior is processed as statistics; thought as quantifiable chemical processes; society as the mere sum of economic transactions; morality as incarceration rates; education as graduation rates; wedded bliss as divorce rates; and the course of history as so many measurable biological modifications. In a world so beholden to the spirit of the Pythagoreans, it is curious the arts should be so patently typified by their explicit rejection of all number.

In Walker Percy’s novel, The Moviegoer, existential searcher Binx Bolling speculates that “romanticism” and “1930’s science” killed his father. He asks himself, “Does a scientifically minded person become a romantic because he is leftover from his own science?” Quantification is the key to the modern physical sciences. We are subordinate to it in the scientific method and in everyday life far more than we are to “empirical observation”—that phrase with which the supposed rationalist among us flatters himself. We do not believe in what we see or experience; we believe in what others can count and calculate, so much so that we readily dismiss our own experiences, if they seem to conflict with some publicly established measurement. And so, though nearly all of us have turned the reins of health and history over to the powers of the numeric, we nearly all feel something “leftover” that cannot be entirely dismissed, but which cannot be counted either, and therefore seems not to count as real. The leftover is us.

I am no salesman, but it would be a hard sell to convince a population of which less than 1% reads poetry with any uncoerced frequency that it can discover something about the ground of reality from the tra-la-la-la of versing.  But I think we can, if only because my own pilgrimage to convictions regarding local politics and the good of the polis as Aristotle conceived it was by way of learning how to write a sonnet.  Long before I knew anything about Wendell Berry, I had gleaned anything he or others might have to say about the virtue of constraint from a sonnet by William Wordsworth:

Nuns fret not at their convent’s narrow room;
And hermits are contented with their cells;
And students with their pensive citadels;
Maids at the wheel, the weaver at his loom,
Sit blithe and happy; bees that soar for bloom,
High as the highest Peak of Furness-fells,
Will murmur by the hour in foxglove bells:
In truth the prison, unto which we doom
Ourselves, no prison is: and hence for me,
In sundry moods, ’twas pastime to be bound
Within the Sonnet’s scanty plot of ground;
Pleased if some Souls (for such there needs must be)
Who have felt the weight of too much liberty,
Should find brief solace there, as I have found.

From the ten acre field of the sonnet, being, reality becomes visible to those with eyes free for the seeing.  If the quantitative obsessions of the modern world have made it hard to see any place, so busy are we calculating ad infinitum, so a well-squared cell can remind us that goodness and happiness has measured dimensions of its own.