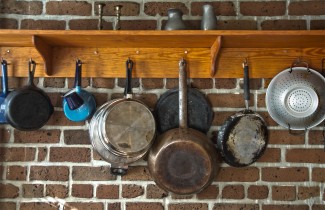 In Dr. Mark Mitchell’s recent post on Front Porch Republic, “W[h]ither the Family Dinner?”, he asks the question, “Are family meals important?”  My short answer is: yes.  But why is it important?  In answering this question, I ask you to recall the account of another Front Porcher cooking a family dinner.  It’s certainly a good example of how food can be aesthetically pleasing while giving family members an opportunity to know one another in ways that they might not otherwise know one another.  Yet food is not merely a tool to be used in interpersonal relationships.  Or rather, although togetherness is something that food brings about, it cannot be the justification for the family dinner.

The FPR post provided an excerpt from an article published recently in the Atlantic which suggested that convenience foods change people’s behaviors and attitudes toward food.  The Atlantic article states that “Americans cling to the ideal of family commensality as an elixir for personal and societal ills (e.g., children’s vulnerability to drugs, smoking, and obesity) and as de rigueur for kindling children’s school success.”  This attitude simply will not do.  We cannot sit down to a family dinner and expect it to fix society’s ills.  Families who are willing to take time to eat together are likely the same families who will be involved in their children’s education and food choices.  If a family is highly disconnected and then eats one meal a day together, this is certainly better than nothing, but it cannot be the ultimate remedy for a fragmented family.  This attitude of sitting down and having a simultaneous re-fuel session that will fix our souls is rather hollow.  We are treating the food as a means to the end of a better society.  Is this the attitude we ought to have toward food?

What are the proper ends of food?  We have all heard that ‘we are what we eat’ and we have all heard the moralizing about health that follows from that saying.  (For an extreme case, see Super Size Me for the effects of McDonald’s.)  Being what my husband affectionately calls “cheap,” I always like to maximize the benefit provided by my food.  Growing up I thought this meant merely eating everything that was purchased.  I have come to realize that food provides us with two goods: pleasure and nutrition.  If it’s not doing both of those, you are not being economical with your food.  Focusing on one to the exclusion of the other will lead to an unhealthy attitude toward food.  Eating only for pleasure without a thought for nutrition can lead to overeating, malnutrition, or other problems entirely.  Eating only for nutrition and not for pleasure has less obvious effects, but real ones nonetheless.

Don’t get me wrong, I am well acquainted with nutritional theories and sometimes I fail to resist the urge to eat bland, tasteless, or just plain bad food because it is “good” for me.  But this is another instance of using food as a means to an end.  This is a partial and incomplete realization of the fullness of our food, for food is meant to feed both body and soul.  To deny the soul’s nourishment is to take a materialist stance toward our food.  We view our bodies as machines needing fuel rather than as embodied souls needing more than a balanced variety of chemicals to be well-nourished.  Even acknowledging that family dinners lead to more “socially adjusted” children is not enough; we are just saying that one behavioral input will lead to another behavioral output.  Behaviorism is a materialist rationale.

For the Atonement, like many other great, though lesser, resolutions, is physical as well as spiritual—to use once more that fatal intellectual dichotomy which has done so much harm to Christendom.  It is, say rather, carried out in the blood as well as the soul; the final seal of all things in this creation of our Lord God’s is physical; it was, as was said at the beginning, his very purpose in it.  The forgiveness of sins, therefore, is a physical thing; that it certainly must be so before it is fully operative in every way is shown by the many times when the best intentions of our minds are overthrown by the revolt of our nerves…. The flesh continually testifies, after its own manner, to the good (“Forgiveness and Reconciliation,” He Came Down From Heaven).

Eating is an activity that is continued into Paradise.  It is meant to be a gift given by God for the sustenance of the soul as well as the body.  And it takes work.  Work is not a curse; it gives us meaning and purpose and is worthy in itself.

The article from the Atlantic concludes that convenience foods don’t really save time.  What is their purpose, then?  Perhaps it is best to ask why people buy them.  What is their substitute good?  Are the people buying convenience foods those who would ordinarily buy fresh ingredients, or are convenience foods being purchased by people who would otherwise eat out or buy takeout or even zap a TV dinner?  I’m not sure about the skill level required with the convenience foods purchased during the study, but I know that a lot of women my age and a little older and a little younger simply do not know how to cook.  I grew up in a house that had little processed food and I keep a house now that has even less.  I don’t remember learning how to cook.  The kitchen was just always open for me to experiment.

Since getting married, my husband has started learning to cook and we enjoy cooking together when we can.  But it may be that these convenience foods which aren’t saving time are saving kitchen disasters when people who “don’t know how to cook” want to have a “family dinner at home.”  Are these companies taking skills that have been handed down for millennia from generation to generation and replacing them with something that simply isn’t a valid substitute?  I think they are.  I think James Howard Kunstler’s diagnosis of the falsity of so much of suburbia is applicable to the kitchen as well.  These convenience foods enable us to send the message to the rest of the world that “we’re normal, we’re normal” but, in fact, we are incompetent consumers.

So since our convenience foods aren’t saving us any time, they seem to be sold to us along with the idea of the perfect family.  We can have the happy, smiling family around the dinner table if we buy these products that will enable us to cook dinner without cooking dinner.  Something is always lost in such promises.  I am not saying that those who cannot cook fresh dinners for their families will always come to bad ends.  But these things do cost us something.  They are not consequence-free, as much as we might wish them to be.

The Atlantic article speaks of generational battles over food and nutrition.  Of course parents want their children to eat nutritionally balanced food.  But, as I said earlier, that can’t be our sole motivation for eating food.  Neither can it be our sole argument for getting our kids to have a proper attitude toward food.  Children are embodied souls as much as we are and must be presented with this reality.  They already sense that there is more to food than metrics.  It is more a matter of cultivation than implanting these notions from scratch.  Very young children will eat nearly anything set in front of them and take great joy in doing anything that the adults around them do.  Perhaps we are creating these battles for ourselves by not involving our children in the making and eating of our food.  My two-year-old is frightfully picky about temperature, but she will eat pretty much anything as long as she’s actually hungry.  And she loves to cook.  She still explodes eggs on the counter when she tries to crack them and she still flings chocolate on the kitchen rug when stirring brownies, but she takes pleasure in being a part of the process.

I’m always delighted by accounts of hipster-moms who stay at home because they feel liberated from the corporate world enough to stay home (whether they class themselves as hipsters or not, this is a good summary of my generation’s return to traditionalism).  So I do cook (for a while I made my own bread, but with two kids in diapers, I decided to go back to buying bread.  Don’t judge me, internet.)

Of course, we don’t always think this all the way through every time we sit down to eat.  And sometimes we have to throw some scrambled eggs onto our plates when fussy children and busy days cut our available cooking time down to about five and a half minutes.  But we should always enjoy our food as well as one another.  And when we eat, we can call to mind another meal.  One that the everyday meals are a mere distant shadow of: the Eucharist; when the bread and wine feeds our souls with the very body and blood of Christ.

Teresa Ayers has a B.A. in Classical Liberal Arts from Patrick Henry College.  She currently stays at home with her two daughters where she writes on her blog, makes soap, cooks dinner, and reads a book or two.