Front Porch Republic
Home Articles What Then Must We Do?: Worker Ownership Redux 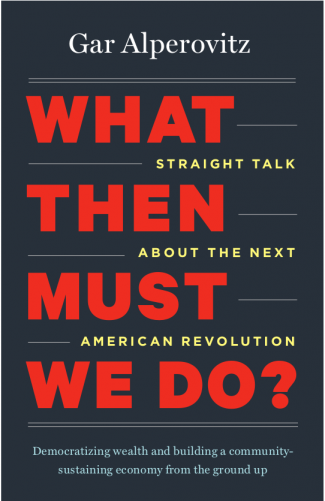 The following is an excerpt from from Gar Alperovitz’s What Then Must We Do? (Chelsea Green, 2013) and is reprinted with permission of the publisher. Learn more about the book here.

By the way, and finally (for the moment), there are also many, many worker-owned companies structured in ways different from traditional co-ops—indeed, around eleven thousand of them, involving 10.3 million people, in virtually every sector, some very large and sophisticated.1 Technically, these companies are called ESOPs (employee stock ownership plans), and in fact three million more individuals are involved in worker-owned companies of this kind than are members of unions in the private sector.2

Here are some examples from different sectors.

The Appleton company is a large paper products manufacturer based in Appleton, Wisconsin. Formed in 1907, it employs around two thousand people and has been 100 percent employee-owned since 2001. In 2010 net sales were around $850 million. Appleton become employee-owned when the company was put up for sale by Arjo Wiggins Appleton, the multinational corporation that owned it—and the employees decided they had just as much right to buy it as anyone else.

W. L. Gore—the maker of Gore-Tex apparel—has been owned since 1974 by (currently more than ninety-five hundred) worker-owners in thirty countries across the world and has annual revenues of around $3 billion. It regularly ranks on Fortune’s Best Companies to Work For list.

Although a majority of ESOP firms are small or medium in size, typically with one hundred to five hundred employees, some are a good deal larger. For instance, Hy-Vee, a midwestern supermarket chain with fifty-six thousand employees, 235 retail stores, and $7.6 billion in sales, is employee-owned through a profit-sharing program and is forty-eighth on Forbes’s list of the largest American private companies. Lifetouch, a company specializing in school pictures, has twenty-six thousand employee-owners working in all fifty states and over $1 billion in annual revenues.

The growth of ESOPs is a very American tale. It involves a corporate lawyer and banker named Louis Kelso who became convinced that some way to democratize ownership was important—and put his skills to work figuring out how to do it. It also involves the late senator Russell Long, the son of the radical 1930s populist governor and senator from Louisiana, Huey Long. (Long Junior happened to be chairman of the Senate Finance Committee, and he and Kelso worked out very significant tax incentives for businesses that sell their companies to employees.)

Historically, some folks—and some unions as well—haven’t always liked ESOPs, and for a couple of reasons. First, there have been some very highly publicized “bad apple” tales. This has created suspicion about all the apples even though the vast majority of ESOPs have a solid record of performance. Second, most ESOPs have not been set up to encourage democratic control. They have been structured so that a trust votes the shares owned by the workers; in these cases the employees still partake in the profits, but they don’t necessarily have a say in how the company is run. This framework arose in part because the original legislation reflected the concerns of bankers financing ESOPs, as well as some tactical fights in Congress—and this fact, too, has raised legitimate questions.

The bottom line is that in general most ESOPs work best in small- and medium-sized companies. Also, importantly, there has been a great deal of forward movement—and the possibility of much more forward movement—in connection with the democratic control issue.

Critically, research done in that interesting and pain-driven state of Ohio suggests that there has been a clear trend toward ever-greater control by worker-owners as time has gone on, and as workers in specific firms accumulate more stock, year by year, and ownership thus moves from minority to majority status. Also, giving ESOP workers the right to vote their stock—permitted but not required by the original ESOP legislation—has been much more common in Ohio than elsewhere, jumping from 14 to 42 percent in a seven-year period. And majority-owned ESOPs have doubled, from 15 to 30 percent of ESOPs in the state. A wide range of informal mechanisms to facilitate greater employee consultation have been growing outside Ohio as well.

Second, legislation was proposed in 2001 that would make ESOPs much more democratic by making those operating as one-person, one-vote businesses eligible for additional federal tax benefits. Here is another tale involving unexpected mavericks: The primary sponsor of this legislation, Representative Dana Rohrabacher (R-CA), is one of the most conservative members of Congress; the legislation’s co-sponsors included prominent liberal Democrats Marcy Kaptur and former representative Dennis Kucinich of Ohio as well as fellow conservative Ron Paul of Texas.10 More recent bipartisan legislation expresses continuing support for ESOP efforts in general.

Third, and far more important than any of the above: Repeated studies show that worker-owned firms tend to be more profitable, more competitive, and more efficient—especially when adequate training has been done in self-management—than comparable firms. In other words (big surprise!), the more workers own, and the more they experience their ownership, the more productive they are over time—and that also means more competitive (and likely to grow for this reason alone).

There has also been a good deal of practical developmental work done on the participation front. Here, for instance, are two of many examples: New Belgium Brewing Company, a Fort Collins, Colorado–based brewery that is now 100 percent owned by its employees, has focused on a high-involvement culture in its triple-bottom-line operations. This includes a commitment to employee participation in decision making throughout all levels of the business. New Belgium also operates on the principle of open-book management whereby all employee-owners are encouraged to review any and all of the company’s financial documents and to provide feedback.

Carris Reels, a Proctor, Vermont–based reel and spool manufacturer, has been 100 percent owned by its 450 employees since 2008. The company has a corporate steering committee that exists as a shared management body comprising one-third corporate representatives, one-third management representatives, and one-third elected employee representatives—all of whom share equal authority. At this writing the company is in the process of designing procedures by which employee-owners will directly select a majority of ESOP trustees and board members.

Finally—and importantly—a number of unions have also quietly been coming around and have begun to see opportunities here, just as they have begun to urge union co-ops and other democratized ownership efforts. Here, for instance, are several instances in which important unions have found ways to take advantage of the ESOP form in very different parts of the country:

Litecontrol, founded in 1936, is an architectural lighting design, development, and manufacturing company operating two plants and employing nearly two hundred workers in Hanson and Plympton, Massachusetts. In 1999 an ESOP was established, and since 2007 the company has been 100 percent employee-owned. More than 60 percent of the workforce is unionized through the International Brotherhood of Electrical Workers (IBEW).

Maryland Brush Company was established in 1851 and is now a leading manufacturer and supplier of industrial brushes worldwide. A subsidiary of Pittsburgh Plate & Glass from 1901 to 1989, it was spun off and incorporated as an ESOP in 1990 that is currently 100 percent owned by its employees. Because of the involvement of the United Steelworkers union in the sale, the union and management each received three seats on the board of directors, with a seventh person selected by mutual agreement of the parties.

Recology is a San Francisco–based recycling company 100 percent employee-owned by its twenty-one hundred employees, 80 percent of whom are unionized through the International Brotherhood of Teamsters (IBT) Local 350. Founded in 1986, Recology is “the largest employee owned company in the solid waste industry.” It collects recyclable waste from twenty-one hundred area restaurants and also provides waste management services for more than 670,000 residential and ninety-five thousand commercial customers in four states. Annual revenues have increased by 7 to 8 percent a year over the past five years (and now stand at over half a billion dollars).

Other unions that have experimented in positive ways with ESOPs include the United Food and Commercial Workers (UFCW), the International Association of Machinists and Aerospace Workers (IAM), and the International Union of Electronic, Electrical, Salaried, Machine and Furniture Workers.

My hunch: Some of the unions that have not liked ESOPS for one or another reason in the past may begin to turn them to the workers’ advantage, restructuring the voting and other powers, using the tax advantages to good purpose, and, of course, unionizing them, as a number are already doing. This is, after all, a huge, huge area of potential worker involvement—and could be of strategic importance in the future, given the difficulties facing the labor movement. That, however, is only a hunch; some of the unions are pretty divided on this question.

There is also this: Most ESOPs are created when owners retire and do not have an heir who wants to run the business. It is to their great (tax) advantage then to sell to the employees.

And we are now also entering the era of the (massive) retirement of the baby boom, a time when such companies will be either largely absorbed by big corporations or possibly (actively) taken over as part of a new direction in democratized worker ownership.