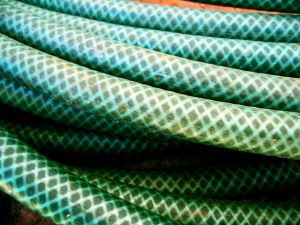 I spent the last eight months working on a dairy farm, and every morning after finishing milking and cleaning the stanchions, I would coil up the hoses in the corner of the dairy barn. This was a simple task and a strangely pleasurable one. I lowered the hose down, meting it out as I felt for the rubber’s natural contours. As it collected on the floor, it formed in loosely concentric circles. There the hose would wait until I returned. Coiled neatly, it was ready to come loose easily, without kinking or snagging. As I put away the hose, I often remembered my father. I would see him clearly, standing in our backyard and looking down at me, a young boy, while he coiled up the turquoise hose in our backyard.

“Remember Skyler, you always coil up a hose when you’re done with it.”

He would say this in a special tone of voice reserved for such lessons. It was strong and clear, but not overtly stern or domineering. It offered simple observations about the ways that men worked in the world. He would not phrase his instructions as commands, or say “you ought to…” or “it’s a good idea to….” Instead, he simply informed me that “you always…” These lessons-as-observations carried the weight of fact behind them, the simple statements about how people behaved in day-to-day life given a moral imperative. I could tell by my father’s voice that he was describing a set of realities to me, realities all the more real because others ignored them. I received these lessons as a boy, and still remember the moment many of them were imparted.

Once outside a Padres game we had lingered too long over our bratwurst and beverages, and were only walking into the stadium as the national anthem began to play. I started to hurry, worrying we would miss the first pitch. He stopped me with a hand on the shoulder. “You always stop what you’re doing and face a flag when you hear the national anthem.”

On a driving trip through England we were going from Salisbury to Bath when we began to see bona fide crop circles in the fields along the road. We stopped to explore these unexpected roadside attractions, and began tromping through the heath. When we entered a pasture through a gate in an old stone wall, my dad shut it behind us and turned to me. “You always leave a gate just the way you found it when you’re walking through someone else’s property.”

Little lessons like these, rooted in space and time, are the seeds from which habits grow. I still make a point to coil hoses when I’m done with them, and I feel my skin crawl when I see people put away hoses improperly. American flags and neighbors’ gates have also taken on an air of holy obligation. I’ve come to see what my father saw, that there is simply a way things are done. The coiled hose is, for me, the epitome of this correct way of doing things. There is a beauty, an elegance, a form following function, to the bands of rubber falling neatly together, coiling like a snake at the base of a spigot. The coil is the telos of the hose, and how good it is to see it realized.

There is more than aesthetic pleasure in a hose put away properly. When a hose is coiled correctly it is less likely to kink. This makes for ease of use, and also prolongs the life of the tool. Each time a hose kinks, the inner layers separate from the outer layers, and these minor ruptures can become holes.

Out of mundane beauty and simple practicality emerge a moral rightness. When the bands of the hose fall neatly together, my hands know that what is being done is being done properly. When the hose twists and kinks, refusing to conform to its original pattern, there is clearly wickedness afoot. Discovering moral implications in the bends of a hose is a strange and delightful discovery, and one that points to a far larger world of meaning. When John Sutter discovered a nugget of gold in his mill trace, it indicated the existence of vast veins of gold throughout the California back country. In the same way, the discovery of a moral order in the coiling of a hose indicates an entire moral universe. If there exists a right way to put away a hose, then the notion of rightness itself must exist.

It’s mighty hard to trip over a hose that’s been put away properly, yet this simple fact—you always coil up a hose when you’re done with it—has become “a stone that causes ((post)modern) men to stumble and a rock that makes them fall.” The relativistic lexical contortions of Foucault and the airy meta-vistas of Baudrillard are dashed to mist like surf breaking on a rock when they crash against the simple, unequivocal lessons my father taught me. There is a wrong way to do things, and there is a right way to do things; you do things the right way.

The coiled hose would make a good symbol for the revitalized conservatism this country needs. It would certainly be better than an elephant, and I may be bold to compare it to a front porch. The twentieth century was littered with symbols that drew men up out of the trenches. The most noble, in and of itself, was perhaps those two tools of honest labor, the hammer and sickle. But tools on their own can be used for good or ill, they lack any organizing principle. A hammer can be used to smash as well as to build, and a sickle can harvest anything. Under the diabolical Soviet regime much that was good was smashed, and they reaped the whirlwind. No, the coiled hose would be a better symbol for contrarian conservatives. It is not just a tool, but a  tool ordered to its proper use. Those bends are conserving something. They maintain the integrity of the hose, and keep the rubber tubing intact for the next generation. This act of stewardship is only possible because man, in his prudence, follows the natural patterns of the hose.

It would be tempting to say that the most important lesson the coiled hose teaches us is that a teleological order is inherent to the cosmos, and that moral imperatives progress from natural patterns. But these lessons follow upon another, the one my father taught me, one sunny afternoon in our backyard.

“Remember, you always coil up a hose when you’re done with it.”