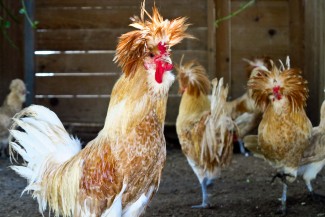 How gratifying to learn of the cultural ascendancy of the Porchers! We’ve made it, we’ve convinced Americans of the abiding values of place, limits, and liberty.

As evidence, I direct you to the newish “agrarian” line of products from the household goods store Williams-Sonoma, which “connects virtues of the homegrown and the homemade.” The “agrarian” line includes products for canning and preserving ($19.95-34.95 per set of 4), vertical gardening ($139.95-399.95), beekeeping (including a suit “specially tailored for beekeeping tasks,” unlike all those cheaper versions), and chicken coops.

The coops are incredible. The “Belltown” ($1199.95) is a work of art, tasteful and well-appointed, designed “to utilized the inherent strength of the classic Gothic arch”—just like grandma’s coop. The “Cedar Coop and Run” is “Hand-built from sustainably harvested western red cedar, custom milled by a local, family owned sawmill and delivered to the workshop via ferry.”

Local wood delivered to the family owned sawmill via ferry. Be still my heart! Is the ferry powered by members of the local crew team, or muscled by Clydesdales fed from hay grown on the vertical gardening systems?

The “Reclaimed Rustic Coop” ($499.95-859.95) “combines modern green construction with the rustic appeal of an old barn” and is “decorated with a hand painted rooster.” Lovely! Nothing is worse than previous generation of coops without LEED certification, and the minimalist Bauhaus versions, however sustainable, just don’t speak “rustic” to me.

Thankfully, all this DIYing is made feasible with the “White Glove delivery” option, where trained agrarians (Mark Mitchell himself?) can “assemble the coop and place it for you.” It’s good to know that in these hard economic times my DIY projects won’t cost jobs. That’s socially conscious consumption, not like those other, less-enlightened DIY projects where you have to “assemble” and “place” the coops yourself.

Does Wendell Berry have an estranged grandchild in advertising who’s taking revenge on him? Did the PoMoCons buy a controlling interest in W-S so as to satirize the Porch?

Here, in a perfect snapshot, is the culture of narcissism. As Christopher Lasch explained, where once “advertising merely called attention to the product and extolled its advantages,” it now “manufactures a product of its own: the consumer.” One does not buy a product, you buy yourself.

But W-S has perhaps gone farther than Lasch imagined, for he suggests that contemporary advertising worked by fostering alienation, manipulating envy and anxiety—“Do you look dowdy next to your neighbors? Do you own a car inferior to theirs?”—whereas the agrarian line sublimates such alienation whereby dowdiness is a mark of authenticity. Don’t consume, DIY! Don’t compare yourself to your neighbor and in envy buy something from the store, get off the grid and back to a pre-consumeristic age (and we can set it up for you! What’s not to like?). Lasch only went halfway, for “mass production of luxury items” which “extends aristocratic habits to the masses” is now passé. Instead, the production of luxury items extends mass habits to the aristocrats. All his worries have been turned about in a very slick reversal.

Of course, one can expect (in a season or two) a revolt against all this, and perhaps one will be able to hire a lifestyle surrogate who can do DIY on your behalf. Or perhaps, the oppressive nature of DIY will be exposed and we’ll self-consciously refuse to do anything for ourselves, and a very slick ad campaign will promise goods “harvested from old growth forests and shipped on trucks powered via tar sands-harvested oil to the factory owned by a major multinational.” Who knows what makers of image hold for us next?

Perhaps this is a good thing, in the end. Much good could result, somewhat accidentally, almost invisible hand-like, from people growing a few tomatoes and making some jars of pickles. Or, perhaps in a few years the landfills will contain a bunch of stylish (mostly unused) chicken coops and jars, but it certainly shows the power of the current system and its endless power to subsume its critics and opt-outs. Almost any opposition can be incorporated, almost any dissident co-opted, by the power of consumption.

Which makes me think, it’s almost time for FPR t-shirts, no? What might some good slogans be? “Porchers do it locally” or “Old Porchers never die, they just change place”?

“My porch was ferried here, how bout yours?”