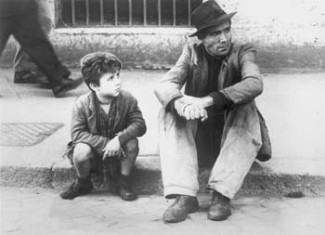 It’s A Wonderful Life was on my mind again recently, this time while watching Vittorio De Sica’s 1948 film, The Bicycle Thief. The leading men in the two films look alike, you see – or at least seem to in their matching hats and bad luck – and I think this: if there was a Greek temple devoted to the celebration of Films About Frustrated, Fedora Wearing Patriarchs, George Bailey and Antonio Ricci would be the temple’s frontal caryatids. These are the kinds of things I think about when I start watching a film at 3:00 am while my wife is in labor. It seemed like the right thing to do at the time, and she was in too much pain to care much.

I wanted Antonio Ricci to be like George Bailey in more than just looks, to be decent and simple in his virtues, complicated and dramatic in the exorcising of his demons. The hope that Antonio might provide a sophisticated and suitably obscure variation on this plaintive theme was all the motivation I needed to look to De Sica’s film for guidance during the birth of my son. There’s a good deal of play-acting in fatherhood, and its ground is fertile for self-invention. In our other roles as a spouse, child, worker, or sibling, our identities are pretty well laid out for us by the time we have enough self-consciousness to realize that they were ever capable of being something else. Those roles sneak up on you with your laces untied and your neck-tie loose.

But preparing for parenthood is different. You’ve got time to situate yourself mentally, to audition in your mind every father, real and fictional, you’ve ever known, and take what you like. I figured I’d take a lot from Antonio, and maybe hire him whole-cloth right there in my living room to play the role of father for my son. So don’t think of my watching The Bicycle Thief at 3:00 am while my wife groaned and paced and timed her contractions with a stopwatch as insensitivity, think of it as cramming for a test or, better yet, watching Casablanca the morning of your wedding.

Whatever lesson I hoped to learn, though, was lost.

To say that the films are different is not to say that It’s A Wonderful Life is an inferior film. Sure, one ends in ecstasy and the other in ennui, but that merely speaks to the national  psyches and purposes of the respective filmmakers, not the quality of the films they made.

Both take as their central problem the difficulty of a man getting on in the world, of doing his duty as a husband and father, of producing some kind of life worth living for himself and those who depend on him. The action in the films is propelled by the protagonists getting stiffed in some way: Antonio, when the bicycle on which his employment depends is stolen; George, by a life of subtle self-sacrifice. In the midst of their sufferings, both begin by assuming their own innocence and goodness. The difference in the two films is that George Bailey’s assumption of his own goodness is validated by an angel, a heap of money, and the adoration of his friends and family, while Antonio Ricci’s assumption is destroyed when he becomes a thief himself. One concerns itself with meritocracy – George Bailey was a good man and received the reward suitable to a good man. The other concerns itself with mercy – Antonio Ricci discovers that he really wasn’t as great a man as he imagined, but that there is mercy enough in the world to compensate.

Maybe because it’s 3:00 a.m. and my cockiness is at a low ebb, but I start to trust The Bicycle Thief’s assessment of fatherhood. Sure, we love George because he is like us – a drafty house, delayed dreams, not enough money, noisy children – and we hope we will be like him in the final way, when he gets his due. His reward is our reward. In the end, the long-suffering Job of Bedford Falls, gets what’s coming to him and, after a lifetime of abnegation, finally finds himself basking in the glow of heaven and earth. It’s not really redemptive in the traditional theological sense of a hero finding salvation through some combination of either grace or mercy, but it does pass for what the word “redemptive” means in the current lexicon of critical terms: things are hard, but eventually they get better.

The Bicycle Thief, though, is a trick from the opening title sequence. We spend our time as viewers wondering whether or not Antonio and his young son Bruno will find his bicycle, hoping against hope (this is, after all, a European film), that he will, certain that, if justice were done, he would. But all this changes in the final minutes of the film when Antonio attempts, in desperation, to steal a bicycle himself, is subsequently caught, and then set free by the merciful owner of the bicycle. We spend two hours wanting justice, and the last minute desperate for mercy.

Kate is leaning against a wall, now, breathing heavily. Our children’s grandmother is on the way. And now I’m thinking of John Donne, of “no man being an island,” of “each man’s death diminishing me,” of “being involved in all of mankind,” of “the bell tolling for me.” The bicycle thief of the title is not, simply, the man who stole Antonio’s bicycle, but Antonio, himself. And if Antonio, a good man, can be made a bicycle thief, then we, too, are thieves, simply waiting for circumstances to become bad enough to emerge. Ask not who the bicycle thief is, the bicycle thief is you. George Bailey has nothing to say to this. Kate’s glaring at the screen.

And through all the troubles and misery, Antonio’s son Bruno trails along behind him, not back at home with his mother, like George Bailey’s son, trying to spell frankincense for the school play. At first they are partners, and I nod my head with satisfaction. Just so, I think. A father, honest in his labor teaching his son beside him the value of honest labor. But as misfortunes follow, Bruno watches his father slowly unravel. He snaps and smacks at him, they bicker, Bruno begins to ignore Antonio’s commands. And finally, in the moment of Antonio’s crime, Bruno watches in judgmental silence.

Kate’s contractions are probably five minutes apart when I realize this. A son is coming. Not one who will be an audience to his father’s greatness, nor even one catching glimpses in the evening of his father’s neurosis, but one who will tag along behind at every step to see his father’s averageness, impatience, despair, and thievery. In the long nine-month dress rehearsal for fatherhood, I had assumed that sons were there to admire their fathers. Now I see, with only hours left to go (I’m loading the luggage at this point), they’re there to witness their father’s humanity.

When Children Resemble Their Fathers