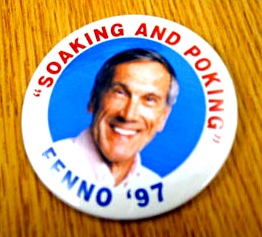 BURNED-OVER DISTRICT, NY—“Richard Fenno’s oeuvre is the most important contribution to congressional scholarship during recent generations,” says Yale political scientist David R. Mayhew. Contemporary political science is dominated by quantitative studies of collective behavior; it is the prosody of regression analysis. As Fenno laments, “individual politicians have usually ended up as integers destined for burial in large data collections.”

By contrast, Richard Fenno applies the human touch. His method over a career spanning more than half a century has been “soaking and poking”—that is, Fenno would follow, unobtrusively, a member of Congress, at home and in Washington, taking notes, asking occasional questions, and just watching. His observations were incisive; his pen fluent. His many books include the landmark Home Style (1978), informed by his understanding that members of Congress are from someplace, and their relationships with those someplaces shape the type of legislators they become.

At the age of 87, Professor Fenno (who was a tremendous influence on me when I was an undergraduate at the University of Rochester) has just published The Challenge of Congressional Representation (Harvard University Press), a study of five members of the House of Representatives whom he soaked and poked and has now rendered into keen portraiture.

What I love about this book is its first chapter, in which Richard Fenno assesses Barber Conable (1922-2003), his (and my) friend, who represented us in Congress from 1965-1985. (I have written about Mr. Conable at length in Dispatches from the Muckdog Gazette.)
Mr. Conable was voted the most respected member of the House in polls of staffers and reporters, but the really remarkable thing about him was, to use a Fenno term, his home style. Barber Conable was as much a man of his place as anyone I have ever met. He came from a family of farmers and lawyers in Wyoming County, New York, birthplace of the abolitionist Liberty Party. The family was both substantial and eccentric; Barber’s father milked cows while reciting verse, in particular “The Lady in the Lake.” (“Our cows used to give better to iambic pentameter,” Mr. Conable told me. “They were the most productive cows in Wyoming County.”)

Young Barber studied at Cornell, where as a pacifist he also organized antiwar forces in 1940-41. His allies at Cornell included a Midwestern wiseguy columnist for the student newspaper named Kurt Vonnegut, who in later years “lobbied me about trying to get more deductions for authors.” War came, and Barber went—into the Marines, and to Iwo Jima.

Between service in the Second World War and the Korean War, he attained a law degree and then set up shop twenty miles north of Warsaw in Batavia, a place of mystery and wonder. He quickly became a leading light of this small city, directing plays and spearheading fundraising drives and, eventually, ousting a corrupt old dotard from the New York State Senate.

In 1964 he managed to survive the Goldwater drenching and was elected to the House, where with his intellect, probity, and wit Conable cut a sharp profile. He would rise to the position of ranking minority member of the House Ways and Means Committee and, improbably, after retiring from Congress, he served a term as president of the World Bank.

You may read more about this magnificent man in my Muckdog Gazette and in James Fleming’s insightful Window on Congress: A Congressional Biography of Barber B. Conable, Jr.

Professor Fenno wrote about Conable, disguised as “Congressman H,” in his classic Home Style. In this new book—his valedictory? I hope not—Fenno goes back to his notes and writes about the man he came to respect so highly that in 1974 he ceased writing about Conable because he had grown too close to his subject.

Richard Fenno and Barber Conable are two of the finest men I have ever known. What follows are several quotes from the Conable chapter of The Challenge of Congressional Representation. They’ll give you a sense of both men.

They met in November 1964, when Fenno, a professor at the University of Rochester, was on assignment from the New York Times Magazine to profile newly elected representatives. (The Times Magazine, which Gore Vidal called the mausoleum of American prose, killed the piece.) Conable explained his politics at that first meeting: “We’re all decentralists up here. We don’t trust the big cities and the impersonal government way off somewhere. We like our local institutions.” He would, over the next twenty years, gain a reputation as a moderate Republican, mostly for his support of the Equal Rights Amendment and various civil-rights measures, though he was parsimonious on budgetary matters and a relatively strict constructionist with respect to the Constitution. But his politics didn’t matter so much: it was the man that impressed Fenno and me.

Traveling with Conable in spring 1970, Fenno discovered the congressman’s essence: “From the time we spent driving through the district during that first visit, I picked up something more basic and more permanent—his attachment to a place—and to the values and practices of that place.”

As Conable drove Fenno from Rochester, whose western edge made up about one-third of the district, into the countryside, he spoke of what home meant to him. Fenno wrote: “[H]is comment to me about his identification with the rural people of his district was almost poetic in nature, because it came just as we left the four-lane superhighway…and turned onto the two-lane road to (small town) Byron…Suddenly, he said, ‘It must be terrible to be without roots, without a place to call home. I have a profound sense of identification with these rural people…I worry about the rootlessness of our people, about the changes that are taking place in our values which were, after all, pretty durable.’ Soon, he brightened and said, ‘It won’t be long now. Here are the Byron suburbs! Those are Gerald Pritts’s beets growing over there. He grows 3 percent of all the edible beets in the United States.”

Conable could have done without the Rochester wing of his district. (Congressional districts are far too large for any meaningful representation, as the Anti-Federalists feared they would be.) Conable explained to Fenno, “In the urban area, I’m a captive of the party. I go to rallies, stand up, and make platitudinal, pro-party, solidarity statements. I’m not allowed to be independent, to be myself. People in the rural areas wouldn’t be satisfied with this. They expect whole relationships with people—not fragmentary relationships, like city people do. I like whole relationships, and that’s why I do so much better in the rural area than in the urban area.”

As they drove the backroads, “He pointed out the landmarks—prehistorical and colonial. He recapitulated the rivalries and alliances, strategies and battles, victories and defeats among the Iroquois, Seneca, and the Neutrals. He traced the course of the Genesee River as it affected tribal boundaries…As we moved about, he would describe a great Indian leader of each area, along with noteworthy white settlers. He told me how he dug arrowheads as a boy, put on Indian dances as an Eagle Scout, and, as a young man, lectured to Rotary Clubs on the prehistory of the area…All in all, it was a remarkable and enthusiastic tour de force—a commanding combination of knowledge, memory, and tale-telling. It centered on a place and on the depth of his connectedness to that place.”

Conable wrote his own newsletters, an unheard-of practice then as now. (Today the noble Tennessee Republican Jimmy Duncan does the same. My old boss, Senator Pat Moynihan, did his best for a while to emulate Conable, whom he greatly admired, but, well, things got in the way.) Conable’s newsletters were thoughtful, ruminative, explicative. Sometimes he would describe an interesting personage or meeting; elsetimes he might explain an issue, even wrestle with it on the page.

He had an aw-shucks manner, but he understood perfectly well how unusually talented he was. Writes Fenno: “[D]uring my first visit Conable displayed another personal behavior pattern that distinguished him from every elective politician I would ever know. It was a distinctiveness related partly to shared rural, small-town values/expectations and partly to his self-confidence in connecting with his constituents. Not once in all our time together did a staff person accompany us—not in the car and not at any event.”

Fenno was also struck, in his travels with Conable, by his “refusal to ask anyone to vote for him…The idea seemed to be that if he let them take the full measure of him personally, there was no need to solicit votes point blank.”

He refused to accept any campaign contribution of over $50, even when he faced a spirited challenge in the Watergate year of 1974 from Rochester Vice Mayor Midge Costanza, a populist labor Democrat. (As a 14-year-old I stuck campaign fliers under car windshield wipers for Midge. Kids those days…) His colleagues regarded this forswearing of legal graft as crazy, especially in ’74, but Conable was stubborn and principled, always a vexing and inscrutable combination to careerists.

I received a letter from Mr. Conable not long before he died. The subject was my book and our mutual home. It was tremendously moving, laced with an honesty about his life and our connection that almost makes it hard to reread. He truly was a great man. How fortunate for them, and for us, that the outstanding congressional scholar of our time, Richard Fenno, also a man of sterling quality, met Barber Conable, studied him, befriended him.

Conable by Fenno: sometimes the stars really do line up.