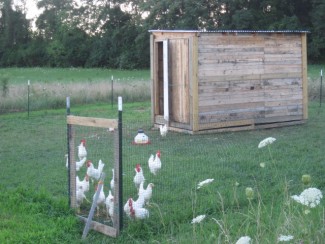 Hidden Springs Lane. This spring we got chickens. In preparation for the arrival of the chicks, a coop needed to be built. Being the frugal sort (some mistake that virtue for a vice), I wanted to make the coop for as little money as possible. The thing needed to be weather tight, fox-proof, able to accommodate a good sized flock, tall enough that I wouldn’t knock my head when moving around inside. My wife’s only requirement was that it was far removed from the house.

After a bit of investigating and some rough sketches, I decided to build the coop out of scavenged pallets plus scraps of lumber in my scrap pile. I located several sources of pallets—an acquaintance even dropped several loads off in my driveway on his way home from work. I had never considered this before, but pallets come in a variety of sizes and qualities, so not surprisingly, I developed a pretty good eye for a best pallets.

I purchased some 3’ 4x4s and set six in the ground in a rectangle. This not being a mobile coop, I set the posts with concrete. I also purchased a handful of 12’ 2x6s and joined them to the 4x4s for a floor. Since I was going to use wood chips on the floor, I made sure that the boards were running toward the door so the shovel wouldn’t hang up on the seams between the boards.

The pallets form the walls: three pallets long on each side and two pallets high. Standard sized pallets are roughly (very roughly) 48” long and 40”high, so the two long walls are 12’ long and 80” high. The front and the back walls are two pallets wide with space left in the front for a door.

I purchased some 2x4s and they became ceiling joists providing for a sloping roof so water would drain. Three sheets of plywood and some metal roofing (purchased) completed the basic structure. I paid my youngest son, Scott, to disassemble about 15 pallets that were 82” long and we used these boards for siding. This fall I’ll caulk the seams and the birds will, hopefully, be happy.

All told, I spent about $300 for a 12’x8’coop. The farm supply store down the road sells sheds of roughly the same dimensions for ten times as much. I guess I should hold off on any smug gloating to see if this structure holds up for a winter or two.

The chicks were free. Some friends who knew we were planning on getting chickens called us from the fairs grounds. A lady was there giving chicks away and how many did we want? Twenty five sounded like a reasonable number to start. Our friends (who are already deep into chickens) got about forty. They were all White Leghorns, which are good layers. Since they were all together, our friends volunteered to keep ours at their house for a few days. After that, they were going on vacation and would we be willing to look after their chicks while they were gone? Of course.

We arranged the sixty five chicks in a plastic bin in the garage with heat lamps hovering above them like twin suns of another world. Chicks are cute and make cute little chick noises and some people even like to hold them. Sixty five chicks, for all their cuteness, stink. My youngest son, who is the most interested in raising chickens, cleaned out their bin every couple of days, but even with that the garage began to take on a sort of sickly, though sweet, smell. And because our garage connects to our kitchen, every time the door was opened, the chick odor wafted into the house. Even after my wife started limiting use of that door, the smell seemed to ooze through the walls. Needless to say, having the chicks in the garage was a major impetus for finishing the coop.

Once removed from the garage, the chicks stayed in the coop for a couple weeks. During that time, we put up a fox proof (I hope ) fence around the chicken yard. This is not a luxury—last week my neighbor lost her last two birds from a flock that was five only this spring. I spent as much on fencing as on the coop itself.

As the birds grew, one thing became obvious. Some of the chicks were turning into roosters. Now, chicks can be purchased already sexed, so when you order twenty five hens, that’s what you get (with an occasional stray rooster). However, our free chicks were clearly not distinguished by sex. Eleven of our twenty five are roosters. Roosters eat chicken feed (money), fight with each other, and don’t lay eggs. So, in a few weeks we will reduce our flock by ten roosters. Unfortunately, White Leghorns, while good layers, are not the best meat birds. They’re not even average meat birds, which is perhaps why that little chicken hawk never gets down to eating Foghorn Leghorn. I hoisted a rooster the other day and it didn’t feel like he had enough meat to make a chicken sandwich. I suppose we can turn them into soup. In any event, the day of reckoning is nigh. We’ll see how the boys take to butchering chickens. 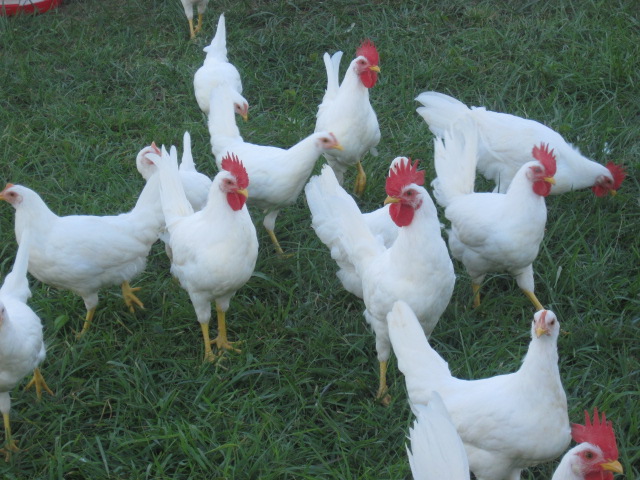 Soon we’ll have plenty of fresh eggs, and Scott will be able to sell the surplus. We’re planning on getting a few more layers to expand the egg business, and next spring I hope to acquire 50 or so genuine meat birds that we’ll raise for the requisite 10-12 weeks and then fill the freezer.

Scott has taken ownership of the chickens. Morning and evening he looks at Strider the dog and says “chickens?” Strider runs to the door and together they walk out to the coop to feed and water the flock. It’s gratifying to see boy and dog walking across the field together.

With the extra pallets I built a two chambered compost bin. Maybe next year we’ll get a cow. I wonder if I can build a small barn out of pallets…. 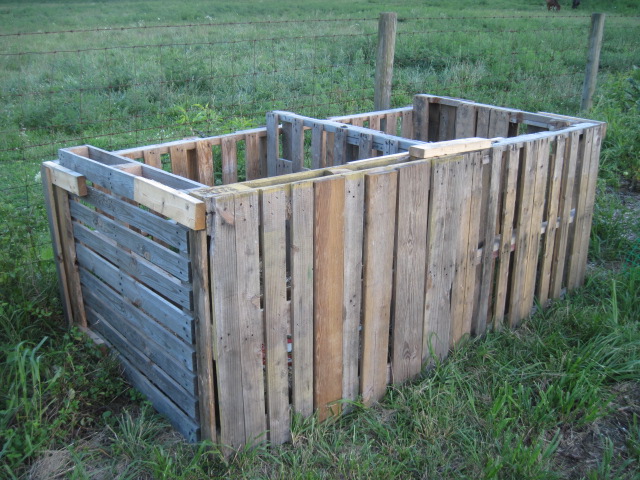