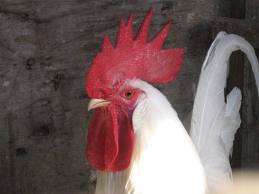 Hidden Springs Lane. Last weekend the deed was done. Having acquired 25 chicks in the spring (they were free) it soon became clear that this was, as they say, a mixed run. That is, the chicks were not separated by sex, and as a consequence, some of the chicks began showing clear signs of, shall we say, roosterness. And as most of you know, roosters are poor egg layers. They also tend to be aggressive toward each other and sometimes toward people. A dozen roosters in our flock was way too many, so the obvious solution was to transfer them to the freezer.

Although I grew up hunting and fishing, I had never butchered a chicken, so like any savvy 21st century farmer I went to You Tube to get information. Did you know that some chicken killing videos are inaccessible without a special password due to their violent content? Anyway, I found some helpful suggestions, and the next day I built a slaughter bench (with apologies to Hegel). Of course, I used pallets that were left over from building the coop last spring. Two pallets on end connected with 2x4s and one on the top with a sheet of old plywood to form a table.

Two of the 2x4s extended out several feet from the table and were three feet from the ground. They were for hanging the birds, upside down, so their throats could be cut and the blood drained into buckets. I decided to skip the scalding and plucking step and simply skin the birds, primarily because I didn’t have the equipment to heat the water outside in an efficient manner. Oh, and I invited guests over for Friday, so although most of the action was slated to occur on Saturday, I had to butcher several birds because fresh chicken was on the menu.

Friday morning I went to the coop and tried to catch a rooster before I let them out into the yard. They seemed to know what was up and were not cooperative. Somewhat reluctantly, my youngest son, who is the caretaker of the chickens, gave me a hand. He then retreated to the deck to watch Dad and chicken from a distance.

Some advice: 1) Have someone help tie the chicken’s feet. Holding a chicken on its back and tying its feet is not easy with only two hands. 2) Make sure you sharpen your knife.

Once the chicken is hanging upside down, it will usually become calm. It will also stretch its neck down and back toward the ground making it quite easy to dispatch the bird. Seize the chicken by the head gently pulling down so the neck is taut. Using your thumb, separate the feathers so that the skin is exposed (cutting through the feathers is possible but more difficult). With a single firm stroke, slice deeply into the chicken’s throat severing the main artery. You will know you have made an adequate cut when the thick dark blood gushes into the bucket you have (hopefully) placed below the bird. Continue holding the neck firmly. The chicken will flap a bit, but will quickly bleed out and then be still. Then remove the head.

After that it’s a matter of removing the feet, pulling the skin down to its bum, opening the abdominal cavity, carefully bringing the guts down to the bum, then cutting guts and skin off with one stroke. Spray the bird with cold water and it’s ready to cook or freeze.

Our friends took a bunch of birds from the same free batch of chicks and eighteen turned out roosters. That gave us thirty birds to butcher, which is quite a few. Since I did three on Friday, that left twenty-seven for Saturday. Fortunately, I had help. Some students were willing (and even excited) to join the festivities, which were indeed much more fun than they would have been if I was doing it alone. My youngest son helped out quite a bit; although, he didn’t want to deal the death stroke. My middle son looked on in a sort of mild disgust, and my oldest son made a brief appearance and then went and took a shower. It might be too late to make a farmer out of him.

The most vexing part of the day, truth be told, was disposing of the waste, which amounted to half a trash can full of entrails, skin, and feathers. I didn’t want to dump in way in back, for it would doubtless attract unsavory creatures from far and wide. I didn’t want to dig a hole deep enough to prevent those same unsavory types from digging it up. So I decided to burn it. Around the pile of chicken parts we build a bon fire and though the fire burned hot, it didn’t consume all of the rather damp mess. I ended up in one of those all-too-familiar “do as I say and not as I’m doing right now” moments that involved gasoline, but in the end everything was reduced to ashes.

As the fire burned I reached in with a rake and scooped up a chicken’s head that was not burning. As I placed it in the hot part of the fire, the bright red comb that only a couple hours before stood proud and erect on a living, breathing, goofily noble bird, I felt a sadness that perhaps all meat-eaters should feel on occasion. The life of this bird is no more and I was the one who ended it. My hand wielded the knife that cut its throat and its dark blood ran down my wrist. As the fire turned that white, blood stained head and proud comb to a blackened cinder, the whole thing took on a sort of hellish cast. I can understand why some people forgo meat for ethical reasons. I am not one of them, but I think it must be beneficial to, on occasion, participate in the process that brings meat to our table. Lest we forget that the meat we eat is the body of a creature that once cavorted around a chicken yard or lowed its content to a master whose role of caretaker includes the role of butcher. It is no small thing to remember that eating meat incurs a responsibility that involves the life and death of creatures. That’s a sobering thought, but a good and true thought that perhaps should season all of our meals of meat.

I should mention that Friday’s dinner was delicious. My wife basted the birds with a chipotle, garlic mixture and roasted them in the oven. Since they had no skin we were especially careful not to overcook them. Our guests and the boys enjoyed them. To be sure, while a bird that runs around a chicken yard catching bugs and scratching in the dirt is never going to be as tender as a bird raised in confinement, the difference was not significant. And while it is hard to imagine anyone calling confined birds happy—and I am tempted to think that they must be miserable—I am confident that our roosters were indeed happy. That is no small comfort.