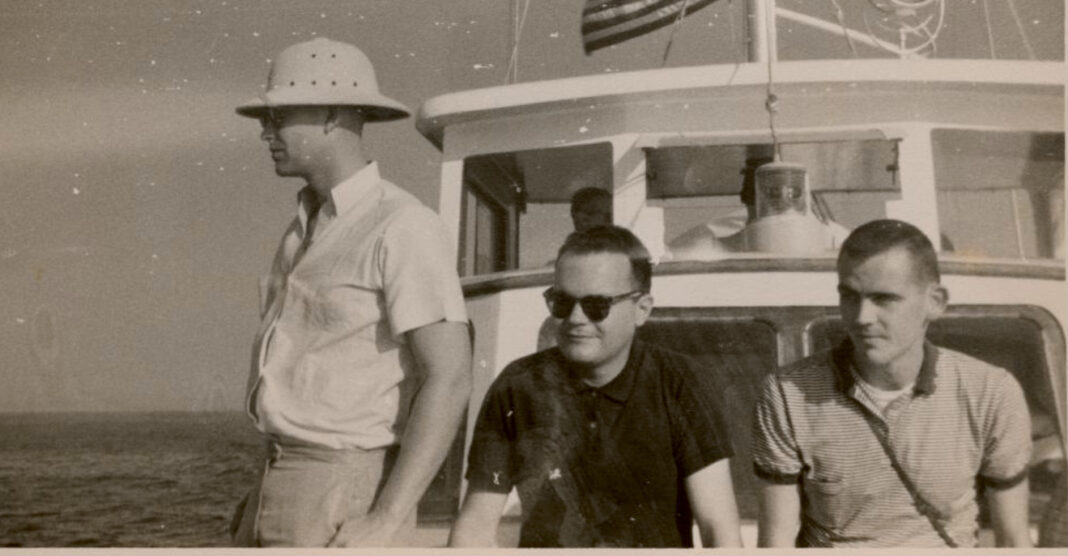 Hamden, CT. John Kennedy Toole died in obscurity on March 26, 1969 at the age of thirty-one. It would be eleven more years before the publication of A Confederacy of Dunces, the novel that would earn him a posthumous Pulitzer Prize. Toole, the son of a car salesman and a lifelong automobile enthusiast, committed suicide with the exhaust from his blue Chevy Chevelle while parked by the side of a lonely road in rural Mississippi. Atop a pile of papers on the passenger seat next to his body, the police found a note addressed to Toole’s parents.

Despite a family history of mental illness and significant evidence of a general deterioration in Toole’s own mental condition in the months leading up to his tragic end, his mother Thelma (having destroyed the note Toole left behind) placed the blame squarely (and quite despicably) on the shoulders of legendary editor Robert Gottlieb. Gottlieb had received the manuscript of A Confederacy of Dunces in 1964 while at Simon and Schuster, and corresponded with Toole for more than two years in an attempt to help the then-unknown writer address what Gottlieb saw as the promising work’s fatal flaws. After an episode in which Toole showed up at the offices of Simon and Schuster unannounced and suffered a nervous breakdown, the relationship ultimately petered out without an offer by Gottlieb to publish the book. Three years later Toole was dead, an outcome that Thelma would go on to attribute to the supposed malevolence of the man who she described as “a Jewish creature…[n]ot a human being.” In his memoirs, Gottlieb has written that he decided to ignore these ravings, feeling that “if such inflamed delusions were helping to assuage the grief of an unhinged mother whose son had killed himself, I could afford to swallow my outrage.”

Gottlieb considered passing on A Confederacy of Dunces to be the “most conspicuous failure” in his long career, yet his assessment of the novel remained unchanged in the fifty years that elapsed between his initial reading and when he revisited it later in life. In his letters to Toole, Gottlieb praised the work as “a wonderful exercise in invention,” and hailed Toole as “wildly funny, funnier than anyone around, and our kind of funny.” Yet he worried that “the book does not have a reason … it isn’t really about anything.”

Gottlieb’s view of A Confederacy of Dunces has been shared by many critics from the time of its publication to the present day. Toole biographer Cory MacLauchlin notes that “[n]egative reviews tended to fault Toole for not following the rule of creating a dynamic main character. They argue that no one changes in the book.” This is a theme taken up by writer Tom Bissell in a recent piece for The New Yorker. According to Bissell, all of Toole’s characters, but perhaps especially Ignatius, “seem bizarrely determined—even proud—to learn nothing from their choices, other people, or the world around them.” Or as Bissell puts it, “at every turn, Ignatius is exactly the character you expect him to be.” And what is it exactly that one expects Ignatius to be? For Bissell, the answer is that Reilly is a consistently and profoundly revolting human being. He writes, “Ignatius simply is not compelling enough to make lovable the repulsive qualities that his creator takes immense pains to describe.”

Gottlieb, Bissell, and other likeminded critics are not wrong in asserting that the Ignatius J. Reilly we meet outside D.H. Holmes in the novel’s opening scene is largely the same Ignatius J. Reilly we see in its closing pages. True, we leave Ignatius apparently on his way to New York City in the company of Myrna Minkoff, while in earlier times even so comparatively modest a destination as Baton Rouge filled him with dread. But to the last, he remains the “red-pilled malcontent” of Bissell’s description, his barked orders from the back of Myrna’s Renault causing her to observe, “Ignatius, all at once you’re your old horrible self. All at once I think I’m making a very big mistake.”

Crucially, however, the Reilly of the timeframe in which the novel’s action unfolds is not the only Ignatius we glimpse. In one of the book’s most pivotal scenes, Ignatius’s erstwhile employer Gus Levy visits the Reilly home. He is there to determine whether Ignatius is responsible for having drafted a scathing letter on behalf of Levy Pants to Abelman’s Dry Goods, an important retailer of the company’s products. The letter begins by addressing the retailer’s namesake as “Mr. I. Abelman, Mongoloid, Esq.” and somehow manages to get worse from there. (It should be unnecessary to note, at this point, that Ignatius is in fact the letter’s author). Mr. Levy now faces a substantial lawsuit, and pinning the letter on Reilly is his only hope of escaping liability.

While at the Reilly home, Mr. Levy encounters their long-suffering neighbor Miss Annie. To this point, Miss Annie’s appearances in the novel have largely revolved around her screaming at Ignatius to knock off the racket he is creating with his lute, his trumpet, or his arguments with his mother. Living next to the Reillys has, in Miss Annie’s estimation, taken ten years off her life. She informs Mr. Levy that she must take “six, seven aspirin” every day just to cope with the strain. And yet, unprompted, Miss Annie acknowledges that Ignatius used to be “okay” and was in fact beloved by the nuns at his parochial school as a child. Things changed, in Miss Annie’s telling, with the death of Ignatius’s pet dog Rex. Ignatius was in high school at the time, and his attempt to grieve the loss of his pet met with rejection both from his parish priest and his mother. As Ignatius presided over an improvised funeral of his own creation with the neighborhood children looking on as mourners, Mrs. Reilly repeatedly screamed at him to toss Rex’s body in the garbage can and come inside.

Miss Annie’s revelation is a small detail, yes. But one that gives the book its emotional heft and makes it impossible to agree with Bissell’s key assertion. Ignatius is not the character you expect him to be at every turn. Who would have expected the “scabrous,” “slothful,” “dyspeptic,” “offensive” man that Bissell so accurately describes to have once been capable of loving an animal enough to give it a proper burial over the dismissive objections of the adults in his life? Who would have expected him to have been a child cherished by the local nuns for his preciousness? For that matter, who would have expected him to immediately recall the exact number of years that have elapsed since his father’s death more than two decades ago, as he does during an argument with his mother in the book’s climactic moments? Maybe Rex’s death isn’t the only loss that has profoundly affected Ignatius.

We are not unfamiliar with the concept of an unlovable literary character whose flaws seem to stem from traumatic experiences while young. Dickens’ hard-hearted Ebenezer Scrooge, for one, was once a child abandoned at his boarding school on Christmas only to be rescued by a cherished sister who later dies. Why, then, do we tend to overlook the painful past when it comes to Ignatius J. Reilly? Maybe it is because critics like Gottlieb and Bissell are correct about Reilly’s lack of growth over the course of the novel. Such growth is typically the payoff for mining past tragedies in works of fiction. Scrooge was visited by his ghosts and emerged redeemed, “as good a friend, as good a master, and as good a man, as the good old city knew, or any other good old city, town, or borough, in the good old world.” Toole denies Ignatius such a happy ending, subverting the traditional redemption narrative. In so doing, he arguably gives us a better portrait of what life actually tends to be like. Sometimes the people who the world breaks stay broken.

Bissell concludes his piece by maintaining that Reilly is the forerunner of our modern misfits, a prediction of what was to come. And we certainly do seem to have quite a lot of misfits at present, people who may cause us to want to retreat behind closed shutters like Miss Annie. In Bissell’s view, Ignatius is “the godfather of the Internet troll, the Abraham of neckbeards, the 4chan edgelord to rule them all.” Perhaps then it is worth reflecting on what hidden pain may lurk in the life stories of these unlovable and unloved souls. That, to answer Robert Gottlieb, is what A Confederacy of Dunces has always been about to me. And why it is arguably more important than ever, particularly for those of us striving to live life on the front porch.