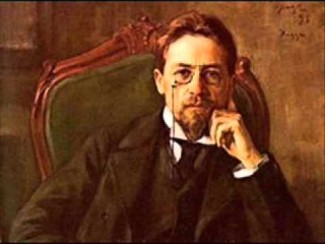 This is an entry in FPR’s One Thousand Words series. Over the next few months, perhaps longer, several dozen contributors will tell us what we need to know about a wide variety of figures—some obscure, some not—in one thousand words or less. Forthcoming: posts on Dwight MacDonald, Mozart, Charles Portis, Foucault, Leo Strauss, Paul Gottffried, Charles Taylor, Irving Babbitt, Bernard Lonergan, Machiavelli, and many more.

Physician, playwright, philander, short story author, and prison reform advocate, Anton Pavlovich Chekhov (1860–1904) lived a life full of paradoxes. He had a religious education but became an atheist; he wrote literature initially for money for which he later became immortalized; he was trained as a physician but treated peasants without pay; he was promiscuous as a bachelor only to be cuckolded when he became a husband; and his plays were initially booed off stage only to be admired ever since.

What does one make of such a rich biography?

If there is any possible common thread among the various aspects of Chekhov’s life, it might be his unbroken and uninterrupted work for the alleviation of his patients’ suffering. In fact, Chekhov considered himself first and foremost a doctor.  As he wrote his publisher: “Medicine is my lawful wife and literature is my mistress.” However, he made little money from his profession, often treating the poor for free and spending his own money for their drugs. Chekhov saw patients from early morning to late night and even organized relief for victims of famine and cholera outbreaks. The continual, almost punishing, pace of his work as a physician often led to bouts of exhaustion and tuberculosis, which contributed to his early death.

Besides seeing to the sick, Chekhov spent three months in the far east of Russia at the Sakhalin Island penal colony, for reasons that are still being debated: Was it for a literary project? Was it to escape from Moscow’s politicized literary scene? Was he trying to forget a failed love affair? When Chekhov arrived at Sakhalin he claimed to be taking a census for the government, which allowed him to interview the convicts and settlers on the island. He witnessed floggings, forced prostitution, and other degrading behavior, ultimately concluding that the government had a duty to finance the humane treatment of convicts. Chekhov published his findings, The Island of Sakhalin, as a work of social science (he would publish a literary account of his visit a year later in his short story “The Murder”).

Working to help his fellow human beings not only characterized Chekhov’s profession as a physician and prison reform advocate but also as an artist. At the end of the play Uncle Vanya, Sonya answers the question why one lives: “Fate sends us; we will labor for others both now and in our old age, knowing no rest; but when our time comes, we will die meekly, and beyond the grave we will tell how we suffered, how we wept, how bitter we felt, and God will take pity on us.”

Although Chekhov did not believe in God, he did believe that humans had a responsibility to work for the betterment of others. But this responsibility to work for others, he believed, was not ours because of self-interest or spiritual obligations but because of the instinctive humaneness that humans could possess in the hope that they will become civilized, compassionate, and benevolent to others. However, this humaneness must be cultivated through constant work, as Chekhov wrote to his brother: “You need to work continually day and night, to read ceaselessly, to study, to exercise your will. . . . Each hour is precious.”

Chekhov’s morality could be described as Christianity stripped of revelation. “There are no lower or higher or median moralities. There is only one morality, and it is precisely the one that was given to us during the time of Jesus Christ and stops me . . . from stealing, offending others, lying, etc.” Helping one’s fellow humans as one could was the preeminent ethical teaching for Chekhov as a physician. Philosophical and theological debates about doctrines and dogmas were of no interest to him. He was concerned with the practical rather than the theoretical, and, as a physician, he wanted to contribute what he could to enhancing the humaneness of life.

Chekhov was not a political activist or ideologue. He did not seek abstract or political solutions to human problems but instead contributed what he could, as a physician, to the specific and particular needs of his time and place. As he himself admitted, “I still lack a political, religious and philosophical world view—I change it every month—and so I’ll have to limit myself to descriptions of how my heroes love, marry, give birth, die, and how they speak.”

For Chekhov, it is not the artist’s “job to solve such problems as God, pessimism, etc.; his job is merely to record who, under what conditions, said or thought what about God or pessimism. The artist is not meant to be a judge of his characters and what they say; his only job is to be an impartial witness. I heard two Russians in a muddled conversation about pessimism, a conversation that solved nothing; all I am bound to do is reproduce that conversation exactly as I heard it.”

This difference between art and life that Chekhov recognized—the difference between describing the world and practicing good within it—is perhaps best captured by the self-assessment of his own work. A few months before he died, Chekhov told writer Ivan Bunin that people might go on reading him for seven more years.

“Well, seven and a half,” Chekhov replied. “That’s not bad. I’ve got six years to live.”

The quip reveals that Chekhov understood that doing good in the world is more important than writing or thinking about it. This humaneness, a residual of his Christian education, is what motivated Chekhov as a physician and informed his art. Although literature, his mistress, may have been his love, it was his medicine, his lawful wife, where he had made his mark.

Letters of Anton Chekhov to His Family and Friends: http://www.gutenberg.org/ebooks/6408

Lee Trepanier is Professor of Political Science at Saginaw Valley State University. He is the author or editor of several books, the latest being The Political Companion to Saul Bellow (University of Kentucky Press, 2013) and Teaching in an Age of Ideology (Lexington Books, 2013).