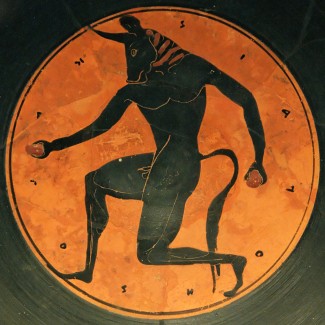 When we lose the sense of transcendence, when in our hearts and minds the things of time are no longer oriented toward eternity, then, writes Jacques Maritain in The Range of Reason, it is not only that “Truth and Justice, good and evil, faithfulness, all the standards of conscience, henceforth perfectly relativized, become radically contingent.”  That would be disastrous enough.  Man might then eat, drink, and be sardonically miserable, dying on the morrow, and never soon enough.

But man is not made for epicurean apathy.  He is made to find himself by giving of himself wholly.  When Jesus says, “He who would save his life must lose it,” He is but expressing a law of Being itself.  Bonum diffusivum sui, say the schoolmen: the Good ever seeks to pour itself forth, and if man cannot submit himself and all his works to God, then he will lose himself instead in the immanent.  “The absolute or positive atheist,” says Maritain, “hands himself over, body and soul, to the ever-changing and all-engulfing Whole – be it the social or the cosmic totality.”  Not in resignation does he do so, but in a perverse love, “willing to make of his own total being, with all its values and standards and beliefs, an offering given . . . to that great Minotaur that is History.”  It is a monstrous self-denial, “paid for at the price of the very Self, and the existence and dignity of the human Person.”

The great Minotaur that is History – a brilliant metaphor.  Recall the myth.  The Athenians had slain Androgeos, son of King Minos of Crete, out of envy for his athletic triumphs.  Minos then demanded from Athens a yearly tribute of youths and maidens, to be shut in a vast labyrinth where dwelt the half-man half-bull Minotaur, conceived in bestial intercourse by Minos’ queen.  The Minotaur slew and devoured his yearly prey, until the hero Theseus came to town.  He slew the Minotaur and, with the help of a ball of string given him by the princess Ariadne, found his way back out of the labyrinth.

Where there is faith, there is liberty – the heavens are open, and man’s life has an aim, transcending his corporeal makeup, the particularities of his culture, and the monetary exchanges he must make along the road.  Where there is no faith, human choices, in all their mad variety, reel back into the dark woods, or into the inextricable error of the labyrinth.  But the labyrinth is intolerable.  We must be going somewhere.  Then it is that the Minotaur is summoned from the depths.  His name may be Evolution, now worshiped as a god.  We will hurl ourselves into the maw of evolutionary change, even by our own tools accelerating that change, breeding the Minotaur to which we sacrifice ourselves.  Let man perish, that the superman – or whatever it will be – may stalk the earth.  His name may be History, worshiped as a god.  History is not the sum of free human choices.  It is its own being.  It possesses its own thrust.  It will not be denied.  We may then either go down into the maw rejoicing, having won the Minotaur’s favor – being on the “right” side of History, which means no more than yielding to inevitability now defined as right, or we struggle against it in vain, and are devoured anyway, while our fellow tidbits mock us and wag their heads.

The man truly free is not encumbered by what the theologians call the vice of human respect.  He does what is right because it is right, not because it will win him glory.  If it is wrong to submit one’s conscience to the approval of a debased man, it is all the worse to submit one’s conscience to the approval of a debased culture.  What the worship of the Minotaur does, however, is to transpose the submission into a vague future, to soften our sense of the contemptible.  This is not the Last Judgment, when God will reveal all the evil we should like to have hidden, and all the goodness we so foolishly ignored.  That will but reveal what is the case now.  But when History is god, then one must take pains to flatter it, to align oneself with what one supposes people will say in a thousand years, knowing that those people will not be impartial judges either, but will be formed by the inevitable and irrefragable historical process.  I cannot express the irony more trenchantly than Maritain has done.  The rupture of the man without God, he says, “began as a claim to total independence and emancipation, as a proud revolutionary break with everything that submits man to alienation and heteronomy.  It ends up in obeisance and prostrate submission to the all-powerful movement of History, in a kind of sacred surrender of the human soul to the blind god of History.”

Here I might call up the great false prophets of the past, but that is not my point.  It is not just that they guessed wrong as to where the bus was going.  It is that they boarded the bus at all.  Man without God is a commuter at best, or a tourist, or a prisoner; they amount to the same thing in the end.  Only with God is he a pilgrim, and free.  Every Minotaurian worshiper of the immanent drive of History has had it wrong.  The Roman Empire is dust.  The “dictatorship of the proletariat” is a bad joke.  Manifest Destiny does not look so manifest.  Revolutionaries are as common as weeds.  They are not saints.  It is the saints who are the revolutionaries.

The saints are free, in the most deeply human meaning of that word.  Scrooge believed in Progress, and Scrooge sat hunched over his money and his accounts, reckoning up the debts of other men as if they and he were not fellow travelers to the grave, and beyond.  Scrooge obeyed the law, which hardly pinched his actions; but Scrooge was not free.  He was a sinner, sure enough, which is another way of saying that he was huddled up in himself, grasping and clutching.  He could not fling himself away in love.

That was what Saint Francis did in the piazza of Assisi, when his father threatened to disown him before the bishop; the good boyish fellow flung away all his clothing and disowned his father instead.  He said, in effect, “I will not submit myself to the Progress of the Family Bernadone.  I will not pay homage to the changing times.  I renounce the world, to love the world,” and Francis went forth and preached, immersing himself in the love of God and neighbor and the beautiful things of creation.  Augustus Caesar boasted that he found Rome in brick and left it in marble – mainly in marble false-fronts an inch thick.  Augustus Caesar is in his tomb.  The song of Saint Francis still resounds.

That harried fellow on the commuter train into the city, staring at his telephone, caught in the vortex of buying and selling, or of political advertisement, of important opinions, of books on the cutting edge – he is not the revolutionary, no matter what party he belongs to.  He is not free, no matter how much power he appears to wield.  The saint-in-making – I hope it is you, my reader – who retires to his closet to pray in secret, and to lose himself in the contemplation of God – is free.  The man who organizes his “public service” according to the dictates of Progress, or whatever the Minotaur’s name may be, is of all men most miserable, since not all his money or his sweat can buy him love, his own or another’s, and he but bleeds himself along the road to the Minotaur.  He misses the love of the saint, and the pleasure of the sinner.  But the man so caught up in the love of God that when he gives, his left hand does not know what his right hand is doing, he is truly free – so free of himself and with himself, he can hardly stop to notice how free he is; just as a healthy man does not think of his health, and a man seized by joy has no idea of the radiance that glows in his countenance.

And when people accuse us of being retrograde, or medieval, or puritanical – all words rummaged out of the box labeled “Not Progressive” – we should shrug, as if they had accused us of walking on two feet, and smiling at the birds, like Saint Francis.  If they like the locomotive so much, then all the better for them if we leave them an extra seat on it.  Unless, that is, they envy our liberty.  Let them envy it, then – and join us at last.