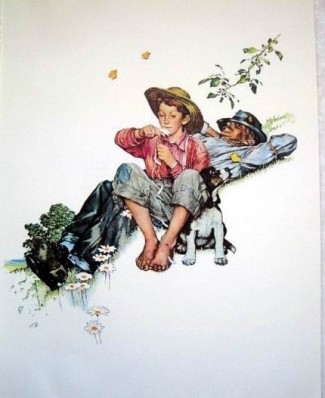 I am looking at another painting by Norman Rockwell, a part of his Four Seasons Calendar: Grandpa and Me in Summer.  I know that I am not supposed to enjoy paintings by Rockwell, because the man had skill and humanity and wit and grace and love, just when the philosopher critics have commanded us to pretend to enjoy what is mock-primitive, bestial, flippant, awkward, and mean.  But I enjoy Rockwell nonetheless, just as I prefer an easy conversation with a sane man to an argument with a lunatic.  Norman Rockwell is sane.

In this picture, Grandpa is lying on his back on a green slope, with his hands behind his head for a pillow and his hat pulled halfway down over his eyes.  It’s hard to tell whether he’s dozing or not.  It seems that he’s in that blessed peace between a light nap and the calm refreshment of gazing up into the clear sky.  A spray of scraggly birch leaves hangs over him from above.  The boy, meanwhile, is lost in another kind of contemplation.  He’s sitting in front, right next to Grandpa’s side.  His straw hat is set back to reveal his whole face.  The legs of his patched trousers are rolled almost up to his knees, which are tucked up, while his bare feet – big bony feet, scuffed and dirty with life, brace against the hillside.  His she-dog beagle nestles under one of the knees, as she sniffs at one of the three yellow-paper butterflies flitting about.  But the boy isn’t thinking of the dog or the butterflies, or even Grandpa.  He has a wild daisy in his hand – there are a few of them on the slope – and he’s picking the petals off, one by one.  “She loves me, she loves me not, she loves me,” that is evidently what is in his mind, as he looks at the flower, with the slightest trace of a smile on his lips, and his eyebrows raised just a little, in wonder.

Someone asks me, “What is our life on earth for?”  I would answer, “It is for life in abundance, before the face of God.”  But if he begged for a more proximate answer, it would be hard to do better than to point toward this picture, and say, “Everything on earth, all politics, all technology, all medicine, all economy, if they minded their business and got on with their work, exists so that an old man, a dog, and a boy can sit on a hillside, the old man dozing and looking to the heavens, the dog happy to be in the free air, and the boy plucking the petals of a flower as he thinks of the girl he likes best.”

I know that these are country people.  Rockwell himself lived in the country during the summers when he was a boy, and living in the country meant work.  That’s all right.  The boy’s ankles and calves are those of somebody who has done a lot of chores – and a lot of running and climbing and walking.  The old man is a wiry grizzled fellow, with wrists like leather straps.  I’m not saying that all the mechanisms of civilized life exist so that people can have a vacation now and then.  We desire not freedom from work, but freedom in and through our work, freedom for the large-hearted friendship and peace and wonder that Rockwell portrays in the painting.  I go to an airport and I see people intent, stolid, jaw-locked, perfectly frozen in their busy-ness; but the old man gains more human good from his nap than they from their ergonomic tics.  His treasure, if not in heaven, is in the sky, where taxmen cannot tax nor moths consume.  I go to a university and see people clambering up the greased pole of ambition, to be noticed, to publish in the best journals, to win a scrap of astroturf from their departmental rivals.  But the boy is more philosophical than they.  They are in love with phantasms.  He is in love with a pretty girl.

Now there are two ways to ensure that a scene like this is now inconceivable.  One is to make sure that the boy and Grandpa never have the opportunity to relax on the hillside in the summer sun.  The other, more reliable, is to make sure that there are no boy and Grandpa to begin with.  In the end, though, perhaps the two ways are really one.  It is to raise up a generation of people who cannot be free – who have grown so used to the four walls that do a prison make, that the open air, and silence, and the sky strike them with a vague terror.  They prefer that the sky threaten, that they may have an excuse to get free of their freedom.  They prefer the noise, lest they hear the still small voice that the prophet heard, who then hid his face in awe.

For it is true that the boy and Grandpa are free.  It isn’t just that they are not straining their muscles.  We could imagine that the boy were one of our contemporaries, sitting on the hillside, with a dull fidgety look, kicking at a rut.  We could imagine Grandpa with his chin in his palm and his fingers over his nose and one eye, wondering why on earth his wife nagged him into taking a boring walk with a boring grandson on a boring day.  And we could imagine the beagle, cocking her head with a half-whimper half-growl, as if to say, “What is wrong with you two?  Can’t you smell the butterflies?”  Freedom is the movement of the heart to embrace what is good, or beautiful, or noble.  A man may be a servant, and admire; but a man who cannot admire is a slave.  The world is given to us gratis – but will only be taken on those terms.  We must be grateful to be free.

Then, if we don’t want the scene that Rockwell painted, we must raise a nation of slaves.  Freedom, how do we hate thee?  Let me count the ways.

The boy likes a pretty girl.  That is natural.  It is foolish to say that he is “bound” by his boyish nature to notice girls.  It is like bemoaning the fact that birds are sentenced to fly.  So we must instill in him what is not natural, to make a slave out of him.  We have to clip his wings.  We will tell him that girls are tramps, and show him some to prove the point.  Or we will do worse than that.  We will encourage him in the “freedom” of limping, or walking on his hands, or crawling, rather than in the normal sky-loving activity of a free boy, walking tall and straight, and noticing the astonishing strange thing in the world – a girl.

The boy is comfortable in his thoughts.  That is natural, too.  It is foolish to say that he is “bound” by his thoughts.  It is like bemoaning that fish have water to swim in.  So we must batter the walls of his sanctuary, to let other messages come in, those of our devising.  Advertisements, sublingual songs, blaring headlines, unnatural colors, crying, “Buy me!  Consume me!  Take me!  Now or never!  Loser!  Loser if you don’t!  Buy!  Look!  Hey!  Watch me!”  It’s what school is for.

The boy is at home with the old man.  That is natural, achingly so.  It isn’t true that children like best to play with other children.  They like best to play with old people, so long as the old people are children too.  It’s as if the boy and the old man, in their matter-of-fact camaraderie, formed a fabulous beast indeed, one that would live to be three score and ten and three score and ten, with a pair of long legs and a pair of stubby legs, and a head addled by youth and a head addled by age, open to the wonder of just having come from eternity and to the wonder of being just about to return to it.  It is not good for the old man to be alone, and that is why the Lord God fashioned him a grandson, poking him in the ribs and begging him to go for a walk into the everlasting hills.  So we must keep them apart.  If there is no generation gap, we must open one up, and make it as wide as a continent.  For this purpose we sow something more destructive than differences.  We sow indifferences.

Do we live in a just and sane society?  How many old men and boys lying on a hillside have you seen?