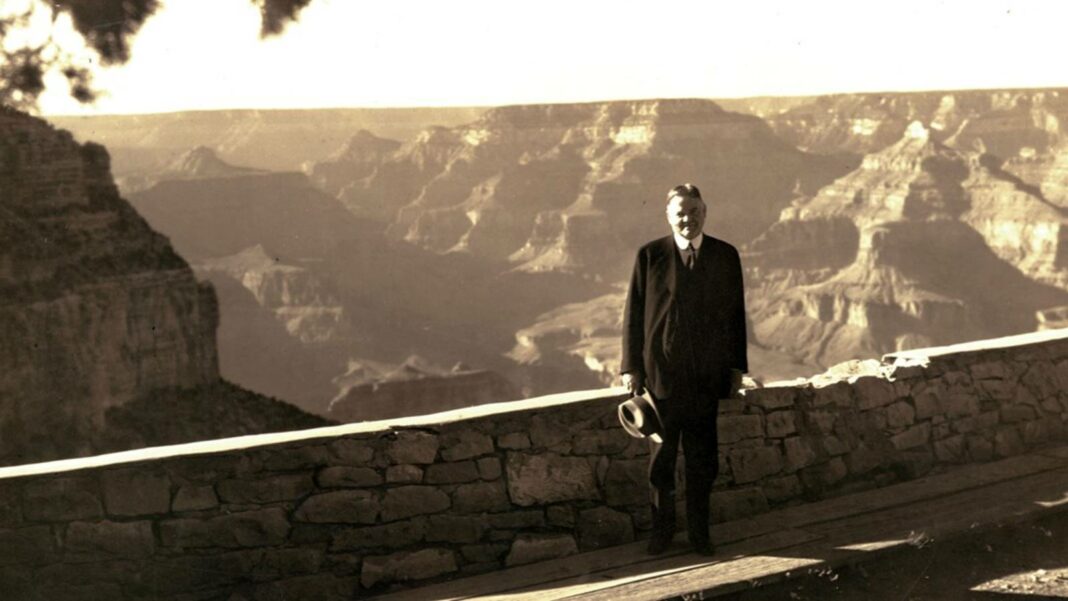 Hamden, CT. Ask a casual student of United States political history about the contribution of President Herbert Hoover to our national vocabulary and you may hear back “Hooverville,” the derisive name given to the homeless encampments that sprang up around the country following the onset of the Great Depression under Hoover’s watch. Less well known is the earlier role the then-candidate Hoover played in coining a phrase that continues to have a significant (and regrettable) place in our political discourse: rugged individualism.

On October 22, 1928, with the Presidential election between Republican Hoover and New York’s Democratic Governor Al Smith just two weeks away, Hoover took the fight to his opponent’s home turf, delivering a speech at Madison Square Garden. Hoover’s speech had initially been scheduled to take place on October 17th at Carnegie Hall. However, with Carnegie capable of accommodating only six thousand versus the Garden’s almost twenty thousand, state Republican leaders determined a change of venue was necessary given anticipated demand for tickets. They were not wrong. By October 12th more than fifty-six thousand ticket applications had been received. Ultimately, in addition to those who managed to be admitted, a crowd of several thousand gathered on Forty-ninth Street to listen to Hoover’s speech broadcast over (apparently quite shoddy) amplifiers. Overseeing the entire affair were eight hundred policemen dispatched to ensure an orderly event. According to a report in the New York Times the next day, no arrests were made.

While the desire to predict electoral results based on rally size has been a flawed tendency of a certain sort of Trump supporter in the modern era, in this case the Hoover-mania on display that night in New York City proved more telling. Hoover cruised to the White House in a landslide. Smith didn’t even manage to carry the state of which he was then chief executive. Instead, he was left to console himself with the support of a handful of states in the still heavily Democratic South and of his Catholic coreligionists in Massachusetts and Rhode Island. Today he is remembered largely thanks to an eponymous white tie fundraiser held annually to benefit the children of the Archdiocese of New York at which Presidential candidates from both major parties typically give speeches roasting themselves and each other.

Hoover’s Madison Square Garden address may not have entered the pantheon of great American political speeches, but its two most famous words are still with us today. In the days leading up to the speech there was some question as to what issue Hoover would take the opportunity to discuss. The Times speculated that immigration, tariffs, or Prohibition could be among the primary topics. (Al Smith was a noted opponent of legally mandated temperance, and his drubbing at the hands of Hoover has often been attributed to the three P’s of “Prohibition, Prejudice and Prosperity”). As it turned out, Hoover chose as his subject the appropriate role of the state in the economy. After noting that the United States had “necessarily turned to the Government to solve every difficult economic problem” during the First World War, Hoover asserted that the fundamental question of the post-war era was “whether Governments should continue their wartime ownership and operation of many instrumentalities of production and distribution.” The choice, according to Hoover, was between “a European philosophy of . . . paternalism and state socialism” and a uniquely American system which he termed “rugged individualism.” A lexiconic star was born.

For almost a century now, politicians and pundits have lauded the rugged individualism said to be the bedrock of the United States. While someone like Ronald Reagan may be regarded as rugged individualism’s avatar, even those on the opposite side of the political aisle have frequently acknowledged the concept’s pull. Mario Cuomo, one of Al Smith’s successors as Democratic Governor of New York, has suggested that rugged individualism is the American creed. Barack Obama has described it as “in America’s DNA.”

The tragedy of the hold Hoover’s rugged individualism continues to have on the American psyche in our increasingly atomized age is that his formulation risks presenting a false dichotomy between state control over an increasingly large swath of our lives on the one hand and society as comprised of individual and independent actors on the other. Rugged individualism’s defenders would argue that this is a misunderstanding of the concept. In his speech, Hoover explicitly rejects a “free-for-all and devil-take-the-hind-most” view of the United States. Yet throughout, his focus is on the individual. New methods and new ideas are the product “of individual initiative and of individual enterprise.” Progress is “the sum of the accomplishment of free individuals.” When Hoover does manage to look beyond the individual it is to the family, which he describes as “the foundation of American life.” But even here his focus is on strengthening intra-familial ties to the exclusion of considering the cooperative relationships that different families may develop with one another. If Hoover’s intent was not to slight the importance of people working together to achieve common ends, it is not difficult to see why his words might be construed as doing so.

Despite what rugged individualism has come to signify for many, a view of American history and of American greatness centered on individuals acting alone is totally out of step with reality. Alexis de Tocqueville, that most astute observer of our national character, noted as one of his primary conclusions about the United States that we are a country of joiners. According to Tocqueville, “Americans of all ages, conditions, and all dispositions constantly unite together. Not only do they have commercial and industrial associations to which all belong but also a thousand other kinds, religious, moral, serious, futile, very general and very specialized, large and small.” Tocqueville is quite right that throughout our history it often seems that the only way we know of acting is through associations. Even the settling of the American West, where Hoover’s concept is seen as having reached its apotheosis, was in fact the product of communities of people rather than lone pioneers. As the great chronicler of the West Wallace Stegner has noted, “cooperation, not rugged individualism, is the quality that most characterizes and preserves” the region.

It is possible that Hoover himself acknowledged this reality in the very speech that is remembered only for having given us rugged individualism. There is an alternate version of Hoover’s October 22nd address that circulates in some corners of the Internet. It contains additional paragraphs not included in the text of the speech that was carried in The New York Times the next day and that is maintained by the National Archives. Despite its unclear origins, this alternate version is sometimes quoted by historians when discussing the speech today. In it, after drawing his famous distinction between European state socialism and American rugged individualism, Hoover goes on to clarify that our national success rests not solely on the efforts of individuals acting alone, but more often on the work of men and women who have banded together in voluntary associations. Echoing Tocqueville, Hoover argues that the United States has “developed a higher sense of cooperation than has ever been known before.” He notes the “ten thousand examples of this cooperative tendency” that can be seen in the country’s “chambers of commerce, trade associations, professional associations, labor unions, trade councils, civic associations, farm cooperatives.” Indeed, the trend toward associations is so widespread according to Hoover that “there is scarcely an individual in our country who does not belong to one or more of them.” In the “cooperative spirit and ability at team play in the American people” there is “a fundamental relief from the necessity of extension of the government into every avenue of business and welfare and therefore a powerful implement for the promotion of progress.”

Ultimately, Hoover’s speech and the way it has been remembered end up feeling like a missed opportunity. What if Hoover did in fact deliver the alternate version at Madison Square Garden and this version was the one recorded in the official history of that night? What if something like “the cooperative spirit” or “American team play” had become the phrase that entered our national mythology instead of “rugged individualism”? Would our institutions of civil society be in such decline? Would so many of us still feel alienated and alone?

Certainly there are other factors that have contributed to the fraying of our social bonds: the false community of social media, the effects of economic globalization, the culture of workism, the scandals that have rocked so many of our institutions. But it is difficult to imagine a journey back from our present atomization that does not begin by recognizing that neighbors, congregants, and colleagues acting together, rather than individuals acting alone, have played the central part in the American story. This recognition does not require that we embrace an ever-expanding role for the state based on the false premise that only through government can we achieve this type of cooperation. Rather, restoring our legacy of civic associations is the antidote for such an outcome, and the best way to promote human flourishing.

The Only Bonds to Be Found: A Review of The Most...