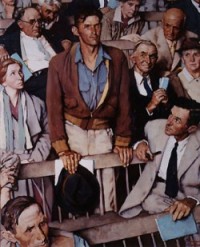 Hidden Springs Lane. The dust has hardly settled over the Great Campaign of 2012 and already the same people are arguing about The Fiscal Cliff. In other words, after suffering through what seemed an interminable campaign during which more money was spent that ever before, nothing has changed. The same people are in office, they are behaving the same way they always have behaved, and Congress ranks just below car salesmen in terms of public trust.

It’s enough to drive one to drink or even cynicism. But do not despair. I bring glad tidings or at least a few suggestions about how something good could emerge from the smoke (and mirrors) of our current (badly crippled) system.

First, the bad news. The mainstream figures of both major political parties are deeply invested in the status quo. Sure, there are some Republicans who occasionally make vague noises about “reducing the size of government” but it never happens. Democrats speak of making government more efficient, but efficiency seems always to entail increases in spending and centralization. The core of both parties are deeply entangled in the Washington/Wall Street axis. Those on the right who lament big government fail to see that big government is a creation, at least in part, of big business and its needs and demands. Those on the left who “tsk tsk” the Wall Street bankers and decry the centralization of economic power fail to see that centralization of any kind of power is dangerous to liberty and corrosive to strong local communities, which are the locus of human flourishing. In other words, Republicans rail against big government and Democrats rail against big business but both fail to realize (or admit) that the two feed off each other. In the short term—at the very least—the mainstream elements of neither the Republicans nor the Democrats will be much help.

However, there are individuals and groups on the fringes that give reason for hope, for there are those who are learning to think and live in terms that emphasize local communities, natural limits, and decentralized power. These are people who don’t fit comfortably in either major political party. And these people exist on both the right and the left. They realize that the way of sanity leads home. They realize that the endless pursuit of wealth and power at the expense of commitment to a place is empty in the long term even if it is exhilarating for a time. They understand that good food well prepared, good conversation unhurried, and the blessings of friendship and rootedness are best realized in the wake of commitment to a particular place and a particular people.

These people seek to recapture the vitality of a democratic system whereby local communities enjoy the possibility of real, meaningful self-government. When effective political power rests primarily at the state and national levels, it should be no surprise that people become less engaged politically. People will engage only when their engagement matters in real, tangible, and on-going ways.

As I say, you find these folks across the political spectrum, and this creates an interesting dynamic: people on the right and on the left who may find more in common with each other than with either of the major parties. Consider, as an example, the new book, Slow Democracy, by two self-professed liberals, Susan Clark and Woden Teachout. Taking a cue from the Slow Food Movement (a movement initially started by an Italian communist), Clark and Teachout argue that democracy works best in the context of local communities. When the democratic process by-passes the local communities (think school consolidation), a serious blow has been struck against not only local politics but the communities themselves. Local communities should, within broad limits, govern themselves. This is not a left or right issue. It’s a basic principle that people can agree on. It requires neighbors to debate issues, which requires becoming educated on the issues, and it makes space for creative solutions that are unlikely, if not impossible, when the decision-making power is removed from the community and is dictated as a one-size-fits-all policy generated by people who know little or nothing of the local communities the policy will effect.

Thus, in the wake of the recent campaign in which the two parties of centralization maintained their power, it becomes obvious that a new localist movement is needed. The attention and resources directed toward Washington need to be reversed. Americans have an opportunity to turn homeward, and many are doing just that. The examples are as close as your nearest farmers market, where neighbors sell food to neighbors. Or the home-school co-op, where families pool their resources and talents to create an informal school. Where a church starts a soup kitchen for the poor. Or where a group of citizens commit to maintain a park or a hiking trail.

Tocqueville spoke admiringly of the vibrant public spirit in America. He worried that centralization of power would quench that spirit. A new localist movement represents an attempt to return our attention, and therefore our influence, to the communities of which we are members. It represents a revitalized citizenship where voting is only a small aspect and where national party affiliations dim in the light of neighbors working together on common problems and concerns.

Of course, this new localism will not solve every problem. Nothing will. But we can surely do better. As a final note, some significant institutional changes must be made. Most importantly, we must revitalize the principle of federalism, which is only a shadow of what it once was. More on that in a future piece.