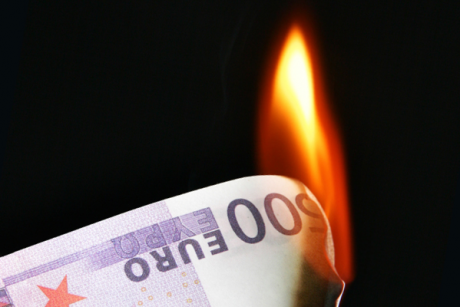 The Euro is in trouble, and the news just keeps getting worse. There is now open talk of a post-Euro Europe, and such a turn would be a serious strike against any robust European Union. After an all-night session last night, however, Europe’s leaders are cautiously optimistic that a deal can be struck to save the Euro and preserve European unity.

The collapse of the Euro would, of course, be a devastating blow to the cosmopolitan aspirations of the European intelligentsia who, at least since Kant, have dreamed of European unity and the political peace and economic prosperity that would inevitably result. Indeed, so much is invested in this version of European union—including financial resources, intellectual energy as well as reputations of Europe’s best and brightest—that failure has been virtually unthinkable even as the facts on the ground appear to indicate that the unthinkable needs to be thought.

Nevertheless, it appears that those calling the shots will double down on their bet that Europe and the Euro can survive and thrive as a single political unit with a single currency. This renewed commitment to a united Europe will, of course, require a reinvigorated effort to remedy the putative causes of the current crisis and these remedies will invariably include increased power to a central body that can better monitor the European economy and ultimately dictate fiscal policy. In short, we will be told that the Eurozone is suffering due to insufficiently centralized power and the obvious solution—one that will finally realize the peace and prosperity that has thus far been tenuous—is more centralization.

This possible “solution” to the European crisis reveals the degree of hubris required to persist in a failed experiment. It also reveals a stunning lack of political imagination, for the obvious alternative—decentralization with local currencies, national sovereignty, and federalism—has been contemplated only by reactionaries and others with little effective voice in the current structure. Their time may be coming.

Of course, suggesting that decentralization is the answer will be met with skepticism by the true-believers in European unity. What about the virulent nationalism that racked Europe for so long? What about the economic destruction not to mention the wars and death that plagued Europe for centuries and culminated in the blood-bath we call the twentieth-century? In short, is decentralism possible without tribalism?

This is a fair question and one that needs to be answered. But this objection is hardly a compelling reason to reject it out of hand, especially when it seems obvious that the centralization that effective unity is utopian in theory even as events on the ground show it to be unworkable and ultimately dangerous. It is utopian, for it rests on an assumption that perpetual peace and prosperity are (always) just one policy away; it is unworkable if the current troubles are any fair indication; and it is dangerous, for centralization of power slowly erodes all competitors and there is no reason to imagine that such a power will be benign forever. The treaty currently under discussion, for example, includes an unspecified “automatic correction mechanism” for countries that break the rules. Hmm.

Decentralization, on the other hand, is not utopian, for it harbors no false illusion of perpetual peace. And while the prospect of a renewed and vicious nationalism must always be guarded against, this is surely no more frightening than an absolutely centralized power without peer. In fact, while nationalisms can be countered by other nations, a unified and centralized authority can be countered by nothing other than good will and optimism.

Ultimately, the issue turns on matters of scale. Through this lens, the current crisis (and this is merely part of a broader crisis that extends beyond Europe) appears as a failure to appreciate the fact that optimal human institutions—those that facilitate human flourishing—cannot exceed a certain scale, and when they do, they will inevitably suffer.

Europe’s problems, then, present an opportunity to reconsider ideas that have been ignored for too long. A renewed commitment to the principles of political decentralism, economic localism, and cultural regionalism is a radical prescription for a Europe haunted by the specter of unity, but it would provide the opportunity for Europeans to reconsider the meaning of citizenship, culture, and community on a scale that is meaningful, which is to say, suited to human beings.

As the crisis deepens and as centralizing solutions continue to show themselves inadequate, perhaps one day in the not-too-distant future saner heads will prevail and consideration of human scale will emerge as an idea whose time has come. The sooner we on this side of the Atlantic learn this lesson the better we will be able to manage our own troubles.