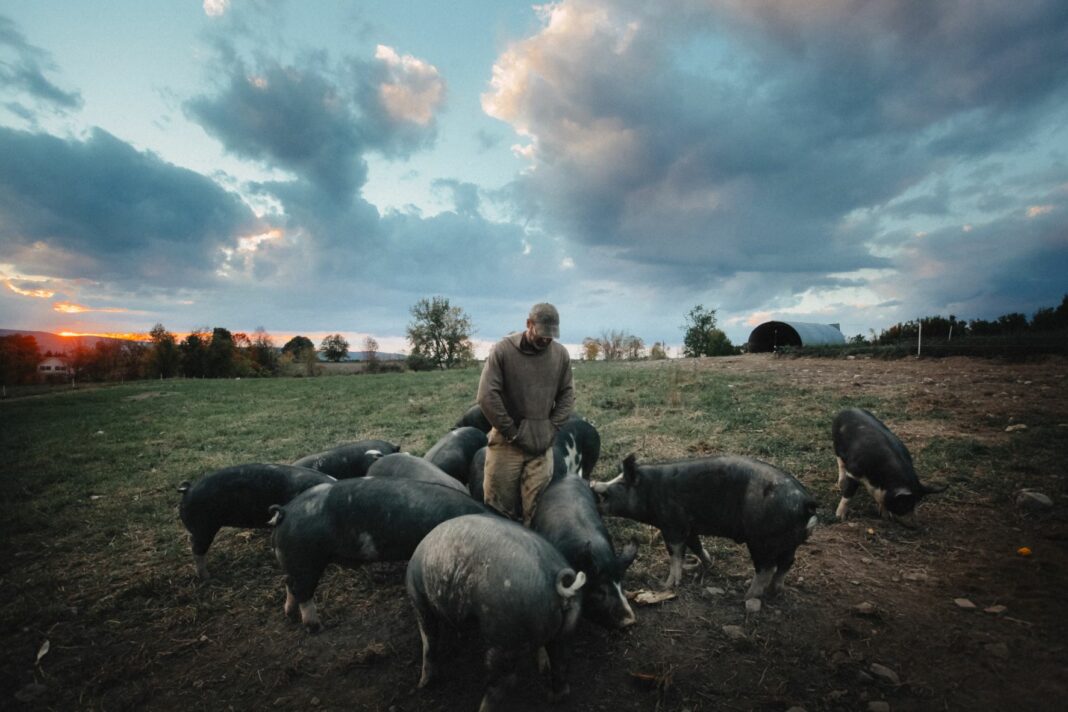 Boise, ID. “I no longer want to peddle in death.” Those words from Bob Comis serve as a hinge in The Last Pig, a film which traces the conversion of Comis to vegetable-only farming. The last two decades have seen a spate of articles, books, films, and other media criticizing the industrialized food systems that feed most of America. Titles like Fast Food Nation, Food Inc., and The Omnivore’s Dilemma come quickly to mind. (Plus, plenty of ink has been spilled here at the Porch on such topics.) Often the heroes emerging in such stories are local/organic/grass-fed/holistic farmers like Joel Salatin. The Last Pig is a genre-busting film because farmers like Salatin and the pre-conversion Comis are implicitly painted as part of the problem rather than the solution. (To be clear, the film is presented as a purely personal journey. Neither Salatin nor any other farmer is mentioned by name.)

Set amid the rolling terrain of upstate New York, Comis’s acres bring to mind Salatin’s Polyface Farms in Virginia. Brooding Bob and boisterous Joel have very different public personalities, but both are sincere and thoughtful. Both men have built bucolic hog heavens on earth. Yet each has reached a very different conclusion about the work of pig farming.

Comis describes his youth as spent in a shopping mall “playing video games and eating fast food.” This unlikely farmer was once “extremely proud” of his efforts to provide others an alternative to industrialized pork, but he now finds the idea that “happy pigs make happy meat” to be “unsettling” and “disturbing.” Comis describes himself as “haunted by the ghosts of those happy pigs.”

By collaborating with talented filmmakers Allison Argo and Joseph Brunnette, it appears he wants us all to be haunted as well. This beautifully shot and sonically understated movie draws one into the inner-conflict that Comis experiences. It first made the film festival rounds in 2017, but it is again catching eyeballs and raising questions on PBS.

What do we owe animals? That seems the underlying inquiry. In a book and articles Salatin has emphasized the “marvelous pigness of pigs.” Much of The Last Pig focuses on a similar theme, highlighting the intelligence and social nature of the snouted ones. Comis describes pigs as “precious” and “sacred.” He notes, “After 10 years of looking into thousands of pig eyes, I’ve come to understand they’re never vacant. There’s always somebody looking back at me.”

The film shows Comis providing his pigs an undeniably good life, but seeing his pigs “so clearly full of joy” ultimately gave him “no sense of absolution.” What many would describe as a good death would come to the pigs at a small-scale processor where Bob knew the butcher by name. Do we, though, owe animals no death at all? And what becomes of them over the long-term if we take that view?

Several years back, I was asked to review a book where the vegan author was enthusiastic about the mass production of lab-created “meat.” This would save farm animals from death and maltreatment, but it would also prevent the possibility of full-bodied lives. Animal farms and ranches would be replaced by these protein “fabricators.” While I favored avoiding industrialized operations that treated hens as mere widgets, I questioned whether we really wanted egg-equivalents that, as their proponents boasted, would take “the chicken out of the equation” completely.

Comis could not financially provide a home for 200 pet pigs. That seems an apt metaphor for society writ large. If not raised for meat, most pigs will not be raised at all. Perhaps that is well and good. More habitat for wildlife may result, and a small remnant of pig breeds may endure as pets. Yet it is somewhat ironic that many of those who extol the virtues of pigs the loudest essentially advocate for removing most of their kind from the planet.

As the last of Bob’s pigs are either slaughtered or, for a hand-picked few, trucked off to one of the animal sanctuaries that helped to fund the film project, Comis describes an “emptiness” overtaking the farm. The main body of the film then ends with a drone shot of Comis walking in a snowy field, the camera pulling back until one sees only an all-encompassing white. Is this purity or nothingness?

For his part, Comis is shown in the film as having no regrets. While the transition to vegetables leaves him “terrified” of potential failure, he still affirms it as “the right thing to do.” Early in the film, Comis comments on how time with his livestock helped him to heal from depression. Nevertheless, “I would give up every single moment I spent with the pigs,” Comis says in the film’s epilogue, “just to bring one of them back.”

Do not count me among those tempted to dismiss Comis as overly dramatic. My infrequent episodes of bringing death to animals have always taken an emotional toll on me. Making a weekly trip to the slaughterhouse for over a decade, as Comis did, seems bound to leave a mark. Can such a wound be redeemed or is the purpose of this pain to dissuade us from the actions that bring it about?

Salatin sees his own encounters with the death of animals within a larger redemptive framework:

Sometimes we become so disconnected that we don’t have a frame of context for what true sacrifice is. Part of blessing our food is being grateful for the sacrifice whether it is a carrot, a pig, or a chicken. The ultimate purpose of living things is to give themselves for something else. The ultimate gift we can give is that we sacrifice in service for each other. And then there is the profound thought that there can be no eternal life without the sacrifice of Christ. There’s the ultimate example of life.

Salatin has worked for years now to spread the gospel of a multi-faceted farm far and wide through practice and pen. I have heard him describe himself as a “farmer who does some writing” in comparison to Wendell Berry whom he admiringly calls “a writer who does some farming.”

Over a decade ago, I met Wendell Berry for the first time. That encounter led to the reprinting of his essay “The Gift of Good Land” in the now-defunct journal Flourish. (Porchers might still enjoy flipping through its digital archives.) Berry’s trip through the Hebrew scriptures concludes with these words:

That is not to suggest that we can live harmlessly, or strictly at our own expense; we depend upon other creatures and survive by their deaths. To live, we must daily break the body and shed the blood of Creation. When we do this knowingly, lovingly, skillfully, reverently, it is a sacrament. When we do it ignorantly, greedily, clumsily, destructively, it is a desecration. In such desecration we condemn ourselves to spiritual and moral loneliness, and others to want.

Is that invocation of sacramental language appropriate or a cover-up for crimes against animals? Berry, in his poem “For the Hog Killing,” does not gloss over the violence involved:

Comis opens The Last Pig speaking of the connection between a farmer and his pigs. “They follow me— curious, interested, and irresistibly gregarious.” But he laments, “They don’t know that this communion is a lie.” Is it a lie or a hard truth in a fallen world? Can one pull the trigger not in sin but in thankfulness for a life well-lived—a life whose death will sustain the lives of others?

I am still inclined to side with Salatin and Berry, but the story of Bob Comis should be in the conversation too. In a culture where the blood of animals is shed far too inhumanely, the story of one man walking away from even the best of the available scenarios deserves a hearing. We ask much of our farmers and butchers, those who deal out death for us. They deserve our respect and compassion if ever they decide to put the knife away.

We ask much of our fellow creatures as well. They deserve our compassion. Even if we struggle to define exactly what that looks like, most of know what it is not. Yet, I am among those who too often succumb to the temptations of avoidance that the ease that our dominant food culture provides. In their own ways, Salatin, Berry, and Comis all challenge us to look our food in the eye.