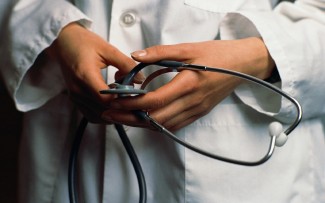 Last summer, my youngest son was on a church trip on the other side of the country, when he hurt his hand. A deep gash on his middle finger required immediate attention at a clinic in rural Virginia. A day after the injury my sister the doctor set up an appointment in Tidewater with a hand specialist, to assess the damage to the digit, and to determine whether something more than antibiotics and standard wound care were needed.

At the hand specialist, the first order of business was, of course, determining who should be billed how much for the visit. We were initially informed that the visit would cost $220. Then something noteworthy but predictable happened: the person in charge of our bill found out that we were not paying the bill out of pocket, but would instead be reimbursed by our insurance for out-of-network care. Once it was determined that the insurance company was paying, the bill increased from $220 to $380.

This is the difference that insurance coverage makes. My son’s care would have been no different in either scenario (the damage was light, and his hand has since fully healed), but the price charged was nearly 75% higher when an insurance company was footing the bill. Since I’m an economist, I’m not shocked by this – I’d be shocked if it didn’t happen. Nevertheless, we should not kid ourselves that these sorts of pricing games have no consequences for health care in the United States.

What accounts for the difference in price?  The $220 out-of-pocket price is the result of a self-contained exchange between two people: a doctor and a patient. Doctor delivers service, patient receives benefit; patient incurs cost, doctor gets the benefit. It is a local exchange: the doctor and patient in some sense are responsible each to the other for costs incurred and benefits delivered.

The $380 insurance-covered price is the result of an exchange between three people, or more precisely, between two people and an insurance institution (government or private). The doctor delivers care and the patient receives the benefit of care, but the patient does not pay the cost directly; the third party insurer pays the cost, and the patient pays indirectly, via a premium payment (often paid in part by his or her employer).

What is the result of this second arrangement?  The price charged does not bear any clear relationship to the underlying cost of the care, or at least the cost of the care when delivered in some productively efficient way.  In the insured transaction, neither doctor nor patient has any incentive to think the price too high, or has any incentive to see it lowered. The doctor is not interested in a low price, since a low price means less income, and he is not doing the patient any favors by lowering a price the patient does not pay anyway (tellingly, the doctor is more likely to reduce the price when facing a real person who must pay it out of pocket). The patient likewise is not thinking about cost; incurring the costs of shopping for or negotiating a lower price saves the insurance company money, not the patient.

This second scenario, in which prices for insurer-reimbursed care are significantly higher that prices for out-of-pocket care, is repeated millions of times a day, and adds significantly to U.S. health care costs. We patients do not bear the full brunt of these costs directly – at point of purchase – but we do incur them through much higher costs of health insurance. This is the real nub of the problem: people are priced out of health insurance by the high rates which are made necessary by third-party payment schemes.

Moreover, this system creates a convenient bad guy – the insurance companies.  Because only the health insurer experiences the direct cost of this current system (as the third party payer), it will get involved either through restrictions on care, through dragging its feet on reimbursement, or through limiting the amounts it will pay. For this the health insurer is vilified as heartless and profit-driven; this arrangement seems convenient for both doctor and patient, who are excused from having to face unpleasant facts about cost. This vilification is unfair, though: someone must care about whether costs are too high, and whether the benefits of care are justified. If the patient and doctor will not take costs seriously, the insurer will.

The inflation of health care costs by third-party payer schemes, and the resulting involvement of third-party payers (both private and state) in cost control and rationing, must be an important consideration in any real health care reform whose goal is to increase the freedom of patients and doctors to work with each other free of third-party interference. Of course, the highest cost health care needs – cancer treatment, major surgery, new and expensive drugs – are the real reason for health insurance, and will always require the involvement of a third party (the insurer). Nevertheless, many health care expenses are not of this nature—a $220 bill for a visit to a hand doctor, plus the cost of follow-up, is unwelcome, but will not break most households any more than a $220 auto repair bill does. Health care plans, like health savings accounts (high deductible, low premium plans), place more money directly under the control of consumers, and will result in more $220 bills and fewer $380 (and larger) bills. They also force doctors and patients to incorporate price into their interactions. This may seem an unwelcome intrusion of cost considerations into the putatively “sacred” doctor-patient relationship. The alternative is not a doctor-patient interaction free of outside interference, however; the alternative is the current system, in which insurance companies are part of care calculations from the beginning, and in which prices are higher, too.