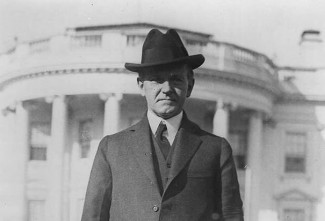 Our interest in historical subjects says as much about our society as about the subjects themselves.  The growing interest in the life, thought and presidency of Calvin Coolidge issues from frustration with contemporary politics and politicians—none so much as Barack Obama. Calvin is the anti-Barack.  Clearly so thinks Charles Johnson whose book Why Coolidge Matters bears the tendentious subtitle Leadership Lessons from America’s Most Underrated President—lessons that Johnson hopes will instruct Obama (he concludes with a section entitled “Lessons for Obama from Silent Cal”).  This is not a biography and while Johnson sometimes works to develop context to explain Coolidge and his actions for the reader, the overwhelming tendency of this book is to produce types.  In this story, Lincoln is the archetype, Coolidge is the type, Woodrow Wilson is the anti-type.  Countless times one reads “like Lincoln,” “like Hamilton,” or “like the Founders” as Johnson sketches an American political philosophy rooted in the sacred text of the Declaration of Independence, through which he reads the Constitution and fidelity to which serves, for Johnson, as the measure of a leader.

This book is deeply embedded in a school of thought associated with Claremont and Harry Jaffa.  Johnson’s characterizations of “the Founders,” of the thought of “Publius,” of the defining characteristic of the Declaration, of the meaning and role of Lincoln, all spring from a well-developed narrative that is simple, clear, and peopled with reifications.  This is not a story that stresses irony or complexity, but strives to produce the strong historical and moral judgments that clean narratives promote.  I presume it is based on this borrowed understanding that Johnson can offer sweeping judgments that he does not seek to prove.  Consider this: “Wilson misunderstood not only the Constitution but also the Declaration of Independence, which it was intended to fulfill.” (152) This is excellent shorthand, even as it dispenses judgments about the beliefs and understanding of many men.  No only does this sentence declare that Wilson misunderstood the Constitution, but by using the passive construction, “was intended,” Johnson claimed mastery over the purposes and moral orientation of a group of people he reifies as “the Founders.”  And so it goes with the entire book—we learn how to understand the Declaration and the Constitution, the salient beliefs of Publius and Lincoln, and the right understanding of the American order into which Coolidge fits—all without the effort of looking at the evidence.

Because Johnson is interested in Coolidge as a leader, he concentrates on two big themes—character and political philosophy.  With only passing references to his upbringing, Johnson concentrates on his classical education and the well-stocked literary and historical imagination that served to shape his character.  Johnson relies heavily on quotations from Coolidge, but so many of them (especially those that focus on his historical understanding and the role of literature) make Coolidge sound more like Russell Kirk than Harry Jaffa.  No matter because Johnson ultimately tethers all of Coolidge’s ideas about a heritage of English liberties, a Whig concern for concentrated power, indeed all his normative beliefs, to Coolidge’s deep reverence for the Declaration of Independence.  This lens colors everything else.

That Coolidge had deep reverence for the Declaration and considered Abraham Lincoln as the great model of democratic leadership is beyond question.  An excellent writer, few of Coolidge’s speeches are better than the one he penned for the Declaration’s sesquicentennial. Johnson makes Coolidge’s words about Lincoln and the Declaration as the key to the man.  The central chapter of his book, “Born on the Fourth of July” is not only the place where Johnson explores Coolidge’s words and ideas on this subject, but it is here, through the prism of the Declaration (which is to say the opening section of the Declaration), where Johnson makes his only sustained analysis of Coolidge’s religious beliefs.  Religion appears to be central to Johnson’s claims about both Coolidge’s character and his political philosophy, and yet the author does not bring to bear any identifiable theological sophistication.  At the end of the book, he refers to Coolidge’s “tragic view of human nature,” but nothing that gives the reader a real sense of the man’s religious views—we only get broad claims about God, natural rights, and to the divine inspiration of the Declaration.  Johnson places so much weight on Coolidge’s faith, which governed all his moral decisions and which helped prevent him from making the mistakes of the Progressives, that we might have hoped for a serious exploration of his religious beliefs in order to understand the source and textured meaning of his devotion to the Declaration, rather than the other way around.

Despite the simplistic typology (“Coolidge…never had a political thought that veered far from Lincoln.”), one does get a sense of the moral power of Coolidge’s character, of the degree to which his beliefs, his politics, his choices, issued from some place in his soul that partisanship could not reach.  In this way Johnson accomplishes one of his goals—to reclaim Coolidge as a useful model for democratic leadership.  The contrast between Coolidge and the dominant intellectual class of our time is sharp, instructive and important.

Among contemporary intellectuals, admirable presidential leadership—to say nothing of greatness—presupposes activism, and activism of a certain sort.  Expanding the power of the government (and the presidency) is a necessary condition for the intellectual stamp of approval since greatness requires that a leader employ new ideas to solve problems and use human knowledge to mold a misshapen world.  But Coolidge’s leadership began with conservation, with protecting and preserving, with improving at the margins, and with the extremely hard task of administration (Amity Shlaes recent biography of Coolidge well explores Coolidge as administrator).

Johnson’s account reveals Coolidge as conservator, but because the author employs such stark types he loses the great subtlety of Coolidge’s management of crises, of policies, and of controversies.  Johnson wants to shave off all unnecessary elements to expose the Lincoln type beneath the surface, but in the end this account seems unfair to the greatness and complexity of Coolidge.  Johnson works so hard to fit Silent Cal into a type that he loses the richness, one might even say the Burkean disposition, of this deeply misunderstood president.  The beauty of Coolidge as president is that his character never allowed him to become an ideologue—he was never defined by any single idea, any single document, any single model.  The real Coolidge escapes from a narrow, abstract realm of political types into the rich, messy, and contextual world of human history.  It is in that world where he provides the best model for our contemplation.