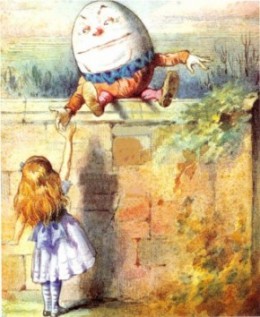 Berwyn, PA. While the American President is appearing on late-night television to tell the world — and the Russians — that a permissive attitude toward homosexual behavior is a matter of “basic morality,” the courageous Ryan T. Anderson takes a harder line in a new article at NRO.  We often hear allusions to Orwell among defenders of real marriage, and justly so: the campaign to redefine marriage is fundamentally about dissolving the present connection between words and reality, wherein words are formed in response to the realities we know.  In its place, the advocates of homosexual behavior, who wish to win for its awkward kisses the state seal of approval, are testing the limits of the old Stalinist project of using words to reshape — to redefine — reality.  But the goal has never been simply to admit homosexual couplings into the circle of marriage, but to redefine what constitutes marriage for everyone.  Anderson begins,

Merriam-Webster is going to have to update the next edition of its dictionary, at least if marriage redefiners have their way. Do you know what the words “monogamish,” “throuple,” and “wedlease” mean? If not, you soon will. After all, the power to redefine words is the power to redefine reality.

Let’s start with “monogamish,” a play on “monogamous.” A 2011 New York Times profile of gay activist Dan Savage, headlined “Married, with Infidelities,” introduced Americans to “monogamish” relationships — in which partners would allow sexual infidelity provided there were honest admissions of it.

The “monogamish” perspective is one of the purported ways in which redefining marriage to include same-sex relationships would make marriage better. The article explained: “Savage says a more flexible attitude within marriage may be just what the straight community needs.” After all, the story added, sexual exclusivity “gives people unrealistic expectations of themselves and their partners.”

These linguistic absurdities serve as further evidence for the case that the campaign for homosexual marriage was never primarily a soft and sentimental extension of legitimacy to the amours of homosexual persons.  Rather, homosexual marriage is a late symptom in the larger and older disease that has undermined the integrity of marriage in the West.  For more than a century, the Catholic Church and other persons of good will have drawn attention to and sought to counter the assault on the integrity of the family: they have sought to protect the authority and economic integrity of the family unit, the role of parents as primary educators of their children, the sanctity of the marriage bond against adultery and divorce, and the duties of fathers and mothers to their children.  In brief, they have sought to protect the family as the constitutive unit of society and as a domestic Church.  Against this, the modern state, from Soviet Russia to present-day America, has attacked the family with such gadgets as postcard divorce, the disjoining of sex from procreation, and the situation at the core of a woman’s life the “right” to sterilize herself and to kill her own child.

Many people want the state to do this, of course.  If we cannot have self-government, if we are too brow beaten to think that the intellectual life has an end beyond advanced technology, or that the spiritual life might have an end beyond therapy or self-help, if we have been rendered hapless slaves of an economy that is only uniquely “global” to the extent that the boss is farther away than ever and cares about you even less than before, then, well, we at least need sexual pleasure to be our locus of freedom.  At least the average slave will always have that to give his life a sense of agency and purpose.  As Slavov Zizek remarked about the Clinton era, the state is only too happy to indulge us in this infantile libidinousness.

And, well, the modern state is doing okay.  Having dissolved so much, all its advocates seem now to require is to render the word marriage not a reference to a natural formation within human life but as a word that can mean anything the voluntaristic fiat of the modern state proclaims.  No wonder that critics of all this, when they do not cite Orwell, wind up citing Lewis Carroll.

We critics of what the age is doing to itself have, of course, cause to be patient.  Alice enjoyed her visit to Wonderland.  At first, it was just “curiouser and curiouser.”  Only after every word was turned on its head (Humpty Dumpty), after every natural habit and practice had been rendered absurd, frustrated in its purpose (caucus races), and after a world freed of cause-and-effect was shown to be ruled by an irrational and murderous queen, did Alice finally desire to go home.  We have, finally, to work to ensure there is something left of the real world to come back to.  Those with homosexual desires will need to seek sanctuary there every bit as much as the victims of divorce and all the rest of us.  Here is hoping that Anderson’s latest essay will preserve what it can and, perhaps, make a few more persons turn back toward reality.