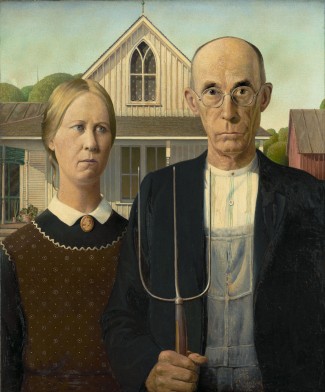 This is my contribution to ISI’s symposium, Conservatism: What’s Wrong with it and How Can We Make it Right?

In one sense, there is nothing wrong with conservatism. The principles remain; reality has not changed. The problem lies in the fact that what passes for conservatism today is not conservative at all or at best a shadowy and distorted version of the real thing. The so-called conservatism promoted by Fox News and Rush Limbaugh is (when a coherent thread presents itself) a fairly standard litany of pro-growth, pro-war individualism, that claims to despise “Big Government” while championing the upward mobility of the most talented and energetic. These ideas, and the policies they spawn, are not conservative.

Our cultural standard-bearers chafe against the notion of limits. We are told that freedom and limits are incompatible, and that freedom is only real if limits are ignored. We are told by advertisers that our limitless appetites are normal and their satisfaction is an indicator of our success. Appetites, however, are boundless and some might recall that the virtue of self-control has, in earlier times, been deemed an important feature of a well-formed character. Self-control and limitlessness do not readily mix.

We are told that the solution to our economic woes is growth. We need steady and sustained growth in order to ensure that our standard of living continues to improve indefinitely. No one seems interested in asking whether infinite growth is even possible. No one seems inclined to ask whether our standard of living is sufficient or even sustainable.

Americans have always been a restless people. We believe that to be in motion is the key to productivity, and productivity is an indicator of worth. The idea of upward mobility is especially attractive to those who find themselves twice blessed with both talent and opportunity. To improve one’s position, to continue to steadily mount the ladder of success, one must relocate or at least be ready to do so. Any commitment to a particular place or a particular community must come in a distant second behind the ambition to succeed. The notion that a person might forgo opportunities in order to stay rooted, in order to stay home, smacks of parochialism, shiftlessness, and misplaced priorities.

Mobility is encouraged by (and in turn helps cultivate) a conception of the human person as primarily an individual and only accidentally a member of a community, a parish, or even a family. On the surface, this conception of the person would seem to carve out the maximal space for individual freedom, for if all of my relationships are purely elective and transient, then I am much freer than if at least some of my relationships are natural, durable, and bring with them obligations.

Ironically, this conception of the autonomous individual helps to facilitate the growth of the centralized state. Robert Nisbet, in his classic work The Quest for Community, argues that as intermediate institutions eroded under pressure from both the state and changing social patterns, the natural longing for community remained as a constant feature of the human constitution. While virtually all means of satisfying that longing were breaking up, the monolithic state emerged as the one enduring institution. People naturally began looking to the state to fulfill their desire for community and as a result the state enjoyed a burst of energy that only aided in the centralization of its power. In short, the atomized individual, far from being a means to maximizing freedom, was and is instrumental in the growth and empowerment of the centralized state.

So, too, the idol of perpetual economic growth. Where the role of the government in the economy is generally accepted as necessary and good and where the lines between Washington and Wall Street are increasingly blurred, the inevitable outcome is the concentration of both economic and political power. Is anyone still naïve or blind enough to deny the incestuous relationship between Big Business and Big Government? In fact, both helped to create the other and both need each other to exist. Many “conservatives” rail against Big Government, but this is only part of a complex problem. Through regulatory capture, tax “incentives”, and the specter of too big to fail, Big Business continues to exercise power far beyond what is legitimate or safe. To ignore this is to ignore a crucial aspect of the problem of concentration and, incidentally, to prevent an effective reduction in the scope and power of Big Government.

The “conservative” penchant for elective wars plays readily into the hand of Big Government, for war has always served to concentrate power. Thus, when law-makers and Presidents champion intervention (which is to say, war) in troubled areas around the world, they are, for all their self-satisfied idealism, participating in a charade: in the name of universal democracy, or the cessation of tyranny, or individual freedom, they are working to expand the scope and power of the central government.

Thus, the ideas of mainstream “conservatives,” far from inhibiting the centralization and growth of power, actually facilitate it. Big Government is not going away because virtually everything politicians do helps promote it. At the same time, the mores that animate most Americans—individualism, mobility, and a suspicion of limits—contribute to the same end.

Our Role Model Shouldn’t be Faust

So what can be done? First it should be clear that the term “conservative” has been hijacked. We should either work hard for its recovery or abandon it altogether. But regardless of whether or not the term, itself, is salvageable in our current cultural and political climate, the family of concepts toward which any legitimate conservatism points remains intact. We need merely to reacquaint ourselves with these concepts that have been so badly neglected.

Discussion of particular places leads us to consider the issue of human scale. There is a scale suited to human flourishing and to exceed that scale is to undermine the possibility of human happiness. Yet, we live in a world where bigger is considered better and things of modest scale are seen as backward, stunted, or inadequate. We admire large buildings, large institutions, large corporations, mega-churches, multi-million dollar budgets, and those who preside over them. However, we too often fail to ask a simple, though indispensable, question: what is the optimal scale? In lieu of this, we automatically think that if big is good, bigger must be better, and continually expanding must be best. Once we begin asking questions about quality rather than simple thinking in terms of quantity, the problem of thinking merely in terms of quantity becomes painfully obvious.

Talk of human scale highlights the issue of limits. In a world where limits are seen as an affront, a willingness to accept limits seems to represent a retreat from the freedom of unfettered autonomy. Yet, most humans throughout history have been aware of and willing to submit to social, natural, and divine limits. We are bound by conventions that provide meaning and context to particular human communities. We are bound by norms rooted in nature that inform us, if we pay attention, to ways that humans can flourish in an uncertain world. We are bound by commands of God who is the ultimate source of all good things.

When we properly conceive of place and limits, our understanding of liberty will be constituted in a way that is both sustainable and liberating. While the autonomous individual seeks absolute freedom but unwittingly promotes the growth of the centralized state, a person deeply committed to a particular place and willing to acknowledge the many ways humans are limited, will, ironically find that liberty emerges in the wake of these commitments. A liberty worthy of human beings is one where individuals act freely in pursuit of goods that can only be realized in the context of a healthy, human-scaled community. In other words, only when human lives are oriented to local communities can a sustainable and rich conception of liberty be secured.

To pay lip service to liberty but to denigrate particular places and to shun limits is to undermine the possibility of liberty itself. Only when those claiming to be conservative re-commit themselves to their places and willingly submit to the limits that are proper to human beings will their pursuit of liberty have a chance of lasting success.

Published with permission of The Intercollegiate Studies Institute. See the rest of the symposium here.