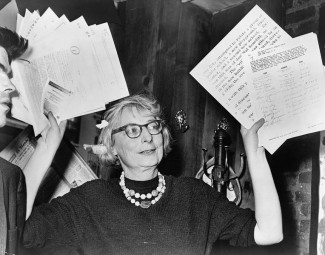 Let us suppose we are confronted with a desperate thing– say Pimlico… It is not enough for a man to disapprove of Pimlico: in that case he will merely cut his throat or move to Chelsea. Nor, certainly, is it enough for a man to approve of Pimlico: for then it will remain Pimlico, which would be awful. The only way out of it seems to be for somebody to love Pimlico… –GK Chesterton

You could call her a Front Stoop Republican.

Jane Jacobs, best known for her epic battle against Robert Moses’ attempt to build an expressway across the tip of lower Manhattan, had come by this fight honestly.  A journalist and a lover of her own neighborhood– the un-gentrified Greenwich Village of the mid-twentieth century, where she shopped and drank and raised her children– Jacobs set out to investigate what makes cities work: what makes one neighborhood lively, safe, and humane while another one is shriveled, dangerous, and boring.  Her investigations, which became her first book, The Death and Life of Great American Cities, led her to conclusions that contradicted every piece of city planning wisdom being taught uptown at Columbia.

The primary evil that urban planning was seeking to address at the time was what was called the “problem of urban blight:” slums.  The cure, in 1954, for “urban blight” was “urban renewal,” code for knocking down slums, and constructing developments of very tall poured-concrete buildings.  The ex-slum dwellers were then installed in modern apartments and instructed to send their children out to play on the very large, treeless squares of parched lawn that were inserted into the middle of these developments.  These complexes were mashups of several different ideas about what makes good urban design, and belonged to what might be called the Radiant Garden City Beautiful of Tomorrow school, to which Jacobs was constitutionally allergic.

And yet she did not– could not– pretend that slums themselves were desirable.  What she did was observe how slums actually got better: and the process that she noted was something like healing from an illness.  “The foundation for unslumming,” she wrote,

is a slum lively enough to be able to enjoy city public life and sidewalk safety.  The worst foundation is the dull kind of place that makes slums, instead of unmaking them.  Why slum dwellers should stay in a slum by choice… has to do with the most personal content of their lives, in realms which planners and city designers can never directly reach and manipulate– nor should want to manipulate.  The choice has much to do with the slum dwellers‘ personal attachments to other people, with the regard in which they believe they are held in the neighborhood… people who do stay in an unslumming slum, and improve their lot within the neighborhood, often profess an intense attachment to their street neighborhood.  It is a big part of their life.  They seem to think that their neighborhood is unique and irreplaceable in all the world, and remarkably valuable in spite of its shortcomings.  In this they are correct, for the multitude of relationships and public characters that make up an animated city street neighborhood are always unique, intricate and have the value of the unreproducible original.

She was not against planning, or regulation, or political authority.   What she loved was not the contextless assertion of individual will over private property, but the complexity and order of the good urban life. She was in favor of a very large amount of individual freedom in making decisions about property because she saw– not just believed based on abstract praxeological principal, but actually saw– that this was most likely to lead to livability.  Order in a city, she finds, is something that emerges from the countless small decisions of house-proud citizens, living where they work, putting in a cat door or planting a tomato in a window box, minding their business and minding it with relish.  This leads to an “ordered complexity” that is characteristic of living things.

But the business that each citizen minds must be the whole of his business– which includes the common good; Jacobs was convinced that what made for urban security was the presence of people who were keeping their eyes open, who believed what went on in the street to be, precisely, their business.  We have heard about the art of citizenship.  What Jacobs gives us is the craft of citizenship: something hands-on, open to all, requiring attention and apprenticeship and tactical wisdom.

She continued to write extensively, venturing into economics and ecology, but it was that first book that struck a nerve.  Her influence can be seen today in James Howard Kunstler’s loathing of suburbia; in Philip Bess’ idea that mixed-use walkable neighborhoods are such a fundamental good that they belong in our thinking about natural law; even in Bill Bratton’s broken windows policing strategy, which seeks to prevent violent crime by promoting attention to beauty and order in the smallest physical details of a neighborhood.

The idea that one can impose a plan on a city without reference to its history or nature is a kind of urbanist positivism.  Cities, under this conception, are what we will them to be.  They are constrained neither by the universal “kind” of the City (which is only the Classical disguise worn by the New Jerusalem), nor by the particular history of that particular city.

Jacobs did not speak about natural law in this way, but through a kind of alert empiricism, she has– perhaps– discovered the other, corresponding kind of natural law in urbanism: the descriptive law that tells the story of how things that are healthy develop, and how things that are sick can heal.  Attention to her observations can help all of us to become better practitioners of the craft of city living.

First, just go get the book: The Death and Life of Great American Cities (New York: Random House, 1993/1961,) available from your local bookseller.

The Preservation Institute has a small archive of Jacobs’ writing and other relevant material; see especially the interview that James Howard Kunstler did with Jacobs towards the end of her life: a phenomenal pairing of interviewer and subject.

And should you actually want to take action based on any of this, take a walk.  Jane’s Walk promotes “urban literacy” in the spirit of Jacobs by organizing free walks, conducted by locals, in cities throughout the world.   Jane Jacobs Walk, run by–I think– a different group, is apparently attempting to provide some healthy competition in the cutthroat world of urban sauntering promotion.  Or, if you don’t want to wait until May, just grab a city map, a five dollar bill, a piece of chalk (for emergency hopscotch), and a good pair of shoes, and explore your place.  And when you get home, loiter on your stoop, and consider what you see to be your business.